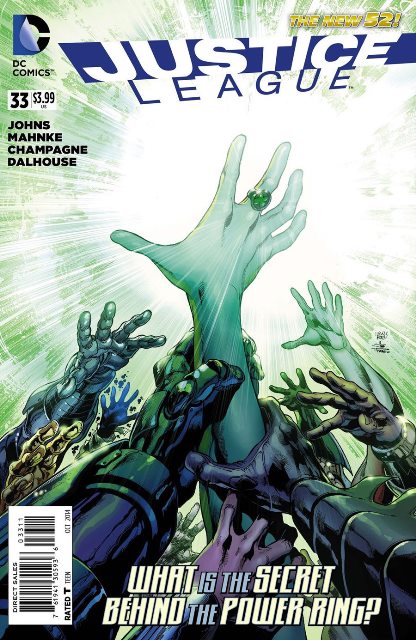 The shocking conclusion to “THE INJUSTICE LEAGUE” leads to a startling confrontation with the all-new, all-dangerous Doom Patrol! And in the wake of it all, a secret will be revealed that will bond two members forever – and break two members apart. Plus, Shazam unlocks a new power that will send a shockwave through the League.

Picked because: It’s been a crazy ride in the post-Forever Evil DC Universe, and bringing the Doom Patrol into the fold has only served to ramp up the tension and the action. Lex Luthor has become one of the most entertaining aspects of this title and it’s so incredibly refreshing to see him used in this capacity. It’s really interesting to see two vastly different groups of superheroes trying to recruit the same new member. Both are hoping to use the new Power Ring as a weapon, but to different effect. There’s also the looming threat of the Anti-Monitor making its way to Earth-0 (aka the New 52 Earth) and Lex Luthor’s mission to stop it at all costs. But don’t forget about the humor Johns and Mahnke have been able to add to the story. Cyborg and Shazam are a great one-two punch and it’s nice to be reminded that they’re both still fairly young compared to the rest of the team. If you’re looking for a big story with lots of fun, this is your book.

Green Arrow is dead – and his replacement finally stands revealed!

Picked because: It’s September and that means it’s time for DC’s annual cash-grab epic event. This one, however, started a few months back with the launch of the Futures End weekly. Every monthly title is tying into the weekly book for this one month to show more of the DC New 52 of this hypothetical five-years later. This issue, more than most, will be an important piece for those who’ve been following the main title. Green Arrow’s death was a pivotal moment for the series in issue #1 and now there’s a new GA about to take his place. This is also the final Green Arrow issue written by the incredible team of Jeff Lemire and Andrea Sorrentino. The two have redefined the character for the New 52 and turned his title into one of the absolute best DC is currently publishing. Their absence will surely be felt next month, but for now we can all get one more issue in so don’t miss out on it.

The Death of Wolverine #1 –Written by Charles Soule
Art and cover by Steve McNiven
$4.99

• The beginning of the end is now here … THE DEATH OF WOLVERINE!

• THREE MONTHS TO DIE, the loss of Wolverine’s healing factor–all led to this, the single most important X-Men event of the decade.

• Logan has spent over a century being the best there is at what he does…but even the best fade away eventually.

• Over the years, Logan has been a warrior, a hero, a renegade, a samurai, a teacher—and so much more. But now, the greatest X-Men hero will play a role he’s never played before in this special weekly event brought to you by industry superstars Charles Soule and Steve McNiven.

Picked because: It’s finally here. The Death of Wolverine is shipping weekly in September to get this story moving alone before AXIS kicks off. While the main Wolverine title has been lackluster at its best, with Charles Soule and Steve McNiven taking the reins for the ending, it should take quite a leap in quality all around. Logan is one of Marvel’s mainstays and he’s certainly found a way to be involved in every aspect of the Marvel Universe, so killing him off is sort of a big deal. And this isn’t just a tease with no payoff, Wolverine will indeed be dead by the end of September. If Marvel is smart, they’ll leave him that way for a long time. It’s important to give fans a chance to actually miss him before bringing him back into the fold. Logan’s legacy will be explored more thoroughly next month, but this is the must-read piece of that puzzle. If you’ve ever been a fan of the most popular X-Man, you don’t want to miss this issue.

HAWKEYE VS DEADPOOL VS CRIME

• Once upon a time, champions emerged to fight evil plaguing humanity. They fought for salvation, for all that is good in the world — and they won. They were kind, generous and self-sacrificing. They were heroes.

• These are not those heroes.

• Meet Hawkeye: Ladies man (“ladies man” because the ladies love to hate this man), crossbow crusader and, most importantly, Avenger. He’s the only guy on the team without any powers, though, so cut him a little slack.

• Then there’s Deadpool (MR. Deadpool to you, skippy) — the regeneratin’ degenerate. You can shoot him, stab him, and make with the punchy-punchy right in his face, but nothing can keep the Merc with a Mouth down.

• What do they have in common? Halloween and a S.H.I.E.L.D. espionage mystery that has the both heroes racing against the clock while outshining one another. It’s a Hawkeye & Deadpool comic 75 years in the making, give or take 75 years.

Picked because: Ready to have some fun with Marvel’s most outspoken mouth pieces? Of course you are! This is the kind of thing fans looking for some good old fashioned “mindless” action and humor can really sink their teeth into. Deadpool and Hawkeye together just seems so obvious it’s amazing it hasn’t happened before now. This five-issue miniseries isn’t necessary reading for either Hawkeye or Deadpool’s main titles, but why would you miss it if you’re a fan of either? This is the kind of thing comics fans need sometimes to recharge those event-fatigued batteries. Gerry Duggan has a good bit of experience with Deadpool (he is the co-writer of the main series, after all) so expect lots of big laughs and fast-paced action, similar to his other works. 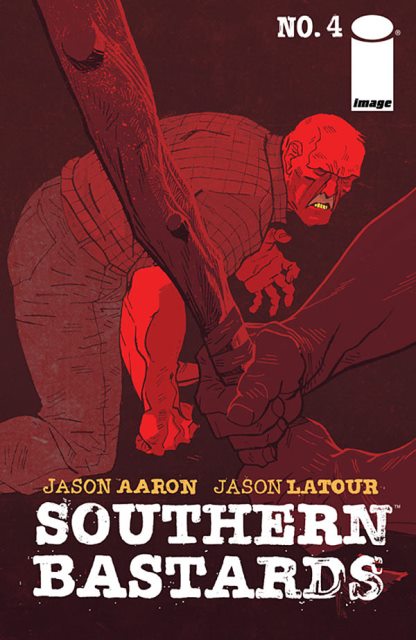 THE EXPLOSIVE ENDING TO OUR FIRST ARC! Earl Tubb and his big stick finally come face to face with Coach Boss. This will not be pretty.

Picked because: This might be the best title Image Comics is producing that isn’t titled Saga, but sadly it’s becoming plagued by publication delays. Thankfully, the last issue of the first story arc is finally going to be in our hands tomorrow. Coach Boss’ chokehold on the fictional Craw County, Alabama is almost impentatrable, but Earl Tubb is about to loosen that grip a bit with a sizeable piece of wood. This story cuts to the heart of both the good and ugly sides of Deep South living, exaggerated of course. But who gets it better than two southerners? Earl’s relationship with his recently-passed father is still a major subplot for this story, too and it’s only getting deeper as it goes forward. At its heart, that’s what Southern Bastards is all about; a man finally getting to know who his father really was and realizing that he might be just like him after all. The sense of social justice that runs throughout this title is another thing that sets it apart from just about every comic on the shelf today.  Jason Latour’s gritty art style is what puts it all over the top. While his style might not be “realistic,” it’s hard to imagine this story drawn by anyone else. His timing is so perfect in certain scenes it’s scary. And trust me, this one will send chills up your spine with every issue.