Art and cover by David Finch

It’s evil versus evil in the shocking “take-no-prisoners” conclusion to FOREVER EVIL! What will be the fate of Lex Luthor and his Injustice League? Who will live – and who will die? And why is The Hooded Man the most feared being from the Syndicate’s world? Do not miss this startling finale that will leave the DC universe reeling and reveal the secrets to the future!

Picked because: The final battle is (freakin’ finally) here! After a couple of months of delays Geoff Johns is finally putting a bow on this one with what should be the fight of the century as the Justice League comes back to face the Crime Syndicate head on. Most people already know how this story winds up as we’ve seen issues of current DC books that take place after this one, but this is important still in establishing just exactly how Lex Luthor pulled off becoming Earth’s new favorite hero. More importantly, why the other members of the Justice League were so ready to accept him into the fold. All the stories from the multiple tie-ins will finally converge here and put the final stamp on this story that’s taken the better part of a year to complete. Luckily, it’s the kind of story whose main title hasn’t disappointed. Johns and artist David Finch have created something truly remarkable and actually delivered on the promise of changing the New 52’s landscape. The last page of this one will certainly leave the DC Universe in a far different place from where it started. Even with a slightly higher price point, this is one that DC fans can’t afford to miss. Also, if Cyborg and The Metal Men manage to get even more hero moments in this final chapter it would be crazy not to launch their own team title later this year. 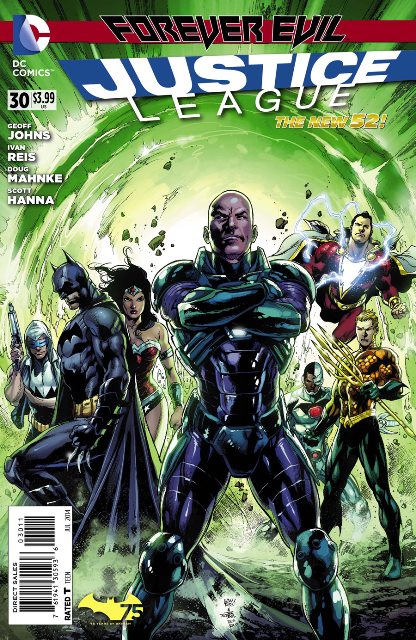 It all changes here with the first chapter of “INJUSTICE LEAGUE”! The next era of the Justice League begins as heroes quit, villains join and a Justice League roster you’ve never seen before emerges, led by the world’s greatest hero — LEX LUTHOR?! As the dust settles and the bodies are buried, the violent consequences of FOREVER EVIL must be dealt with — while a mysterious new force sets its target on the League. But is this force friend or enemy? And why does he want Luthor dead? (If you ask Batman, it’s a long list.)

Picked because: It’s the immediate aftermath of Forever Evil and the world has changed virtually overnight. In comic book time, only a few days past during the events of Forever Evil, even if it felt like an eternity for comic buyers. Geoff Johns follows up his epic conclusion by laying the groundwork for where the heroes and villains of the main Earth stand. Who’s left standing? What happened to the villains who survived? A lot of that gets answered and even more questions get raised. Suffice it to say, this is where the next year of DC Comics will begin. Some things are well known, but other things are brewing beneath the surface. Obviously several members of the Justice League are not happy Luthor is on board, but keeping him out after Forever Evil #7 wouldn’t make sense. He did save the world, after all. Only Superman really seemed upset enough to walk away from the League. Even still, Luthor isn’t exactly working with trust from the group. Batman isn’t sitting around waiting for Luthor’s eventual betrayal, either. He wouldn’t be Batman if he wasn’t already well into putting together a contingency plan. This is also a good opportunity for those who’ve never jumped on Justice League to try it out. It’ll be one of the few times since Johns took it over that things will seem close to a “clean slate.” And any DC fan is going to want to see how Lex is able to maintain his standing as a hero and root for him to eventually fail…or maybe we’ll wind up wanting him to stay! 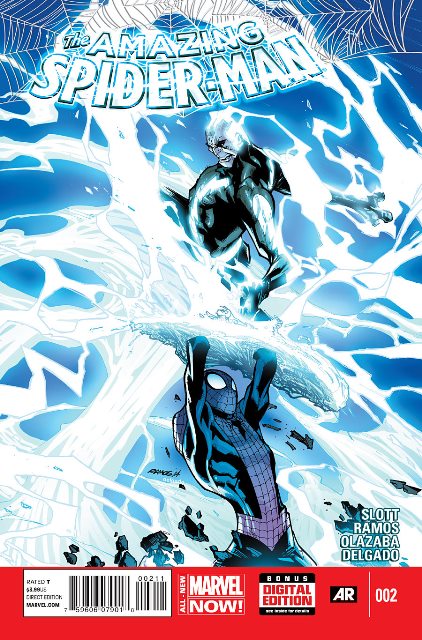 Art and cover by Humberto Ramos

• Electro’s power is out of control! And only one person can fix it…

• So we’re probably out of luck.

• Plus: That thing that freaked you out last issue? There’s more on that. The return of you-know-who? There’s MUCH more on that. Action! Drama! Surprises! There’s MORE OF EVERYTHING!

Picked because: Peter’s first issue back left off with one seriously big awkward moment. How is he going to fix things with Doc Ock’s girlfriend who has no idea the man she loved is actually gone? And on top of all that, Silk is set to make her debut! The only other person to be bitten by the same spider that gave Peter his abilities all those years ago is finally making herself known. Even crazier is that she’s known about Peter for some time. How? Where has she been all this time? Dan Slott has proven to be a mad genius with the Spider-Man mythos and it’ll be nothing if not entertaining to find out the answers. We’re also getting the revamped Electro and another confrontation with The Avengers. At least this time we can say Spidey is probably in the right when he flies off the handle at Captain America. Although Steve Rogers doesn’t usually take being punched in the face too well. As fresh starts go, this one does have all the familiar elements for new fans, but with plenty of gaps and holes for Slott and company to gradually fill in as things progress. Don’t worry about references to Superior Spider-Man. Since Peter doesn’t remember any of it, it’s basically like you’ll be in the story with him discovering everything that happened in real time. Although, the real danger for Spidey is how certain “friends” of his are going to react to him now. Black Cat, in particular, is holding a bit of a grudge over her last encounter with a Spider-Man she didn’t know was essentially someone else entirely. And when Silk finally makes her play the question is whether she’ll be friendly or if she intends to eliminate Spider-Man all together. The intrigue alone is worth the price of admission, but you’ll stay for the quippy dialog. 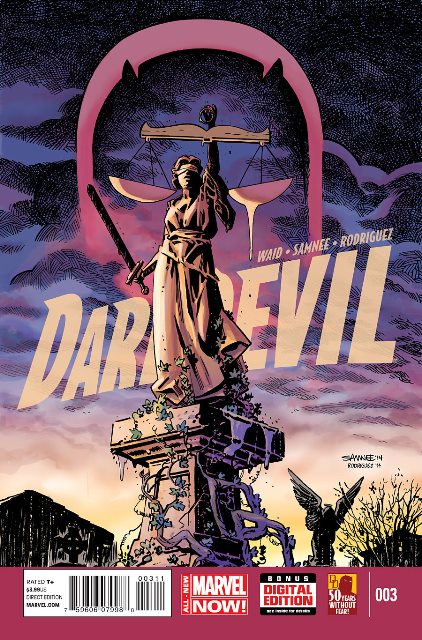 Art and cover by Chris Samnee

• But old enemies aren’t nearly as much of a problem for Matt Murdock as his new friend: The Shroud.

• Kirsten and Matt are sharing a very volatile secret — who’ll be the first to crack?

Picked because: Last issue had such a great moment when the Mayor of San Francisco is describing a new villain in town that sounds remarkably like the Kingpin only to reveal she was talking about The Owl and Matt Murdock bursting into uproarious laughter. It was brilliant and Mark Waid’s delivery is what totally sold it. While The Owl can be a tough customer and it’s great to have a classic Daredevil villain in play again, The Shroud is where the real meat of this story seems to be. A vigilante who really has gone so far that he’s become a villain makes for great storytelling, especially in this context. It’s easy to see he was a good person once, but his “by any means necessary” mentality has compromised any values he might have had and now he’s out to remove Daredevil from the picture. And worst of all, he’s way smarter than he originally let on. But there’s even more going on away from the costumed heroics here. We still don’t know why Matt is telling everyone Foggy Nelson is dead when we’ve clearly seen him alive in multiple panels since the reboot of this title. And the “future” issue of Daredevil #1.5 showed us he’s definitely still around. So what gives? The answers are coming in true Waid fashion…which is to say, slowly. But that’s usually worked in his favor and the readers’ as the story builds on multiple angles before reaching a grand conclusion that’s exciting and satisfying. This story arc is, no doubt, being built as the long-game form of comics. Waid excels at that and it’s served his Daredevil run quite nicely since 2011. No reason to stop it now. 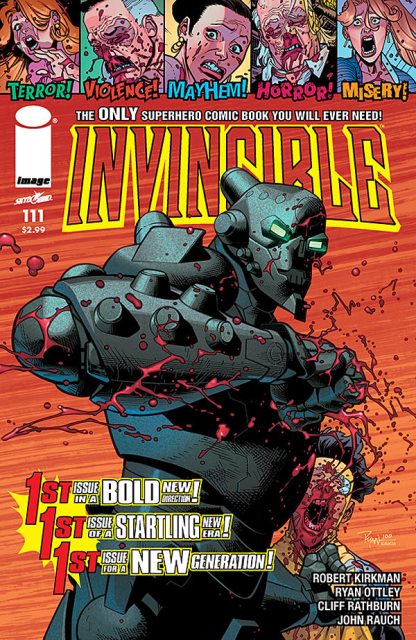 Art and cover by Ryan Ottley

THE WALKING DEAD CREATOR ROBERT KIRKMAN WRITES INVINCIBLE!!! A new beginning for INVINCIBLE as things take a turn down a dark path. Everything changes as Invincible is betrayed by one of his own. You won’t want to miss this explosive issue #1… 1… 1! It packs the punch of THREE relaunched number one issues! IN ONE BOOK!

Picked because: Jump-on points are a rare thing for Robert Kirkman books. His Walking Dead series is certainly not new-reader friendly. And Invincible has 110 prior issues, so it might not seem like the best time to try it out right now. But that’s why this one is being billed as three #1’s in one title. Kirkman’s superhero epic reaches a legitimate turning point where he gives those new readers a chance to jump in and see what this is all about before taking off into a new direction for the long-running superhero title. Image doesn’t have many books in the superhero genre these days, but the few they do have make quite an impact. Invincible has been hailed by many critics and fans as the “best superhero book” in existence. While that may come off as hyperbolic, there is actually a case to be made for its validity. This title has grown with its audience, not unlike the Harry Potter series did with its. However, this one has significantly more blood and gore now than even the darkest of the Potter series. It’s also becoming a ‘Mature Readers’ title for the first time in its publication. Where will the Grayson family go from here? Is there about to be a new hero in the lead role? Has a former friend really turned fully evil? There’s so much going on, but it’s crafted in a way that lets fresh eyes be part of the action without feeling like none of it makes sense. If you like Kirkman’s other titles, this is well worth your time and money. 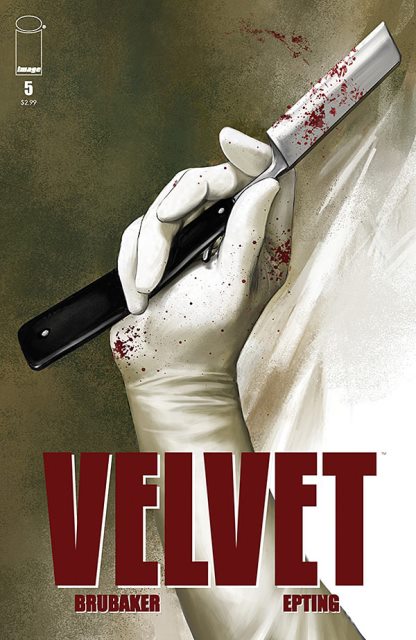 Art and cover by Steve Epting

The first arc draws to a shattering conclusion.

Picked because: The first story arc of this incredibly brilliant series is finally coming to a close and it’s promising to bring all the crazy spy action to a head. It seems like it’s taken a really long time between issues, but sometimes perfection can’t be rushed. Ed Brubaker always saves the best reveals for last and Velvet’s past is going to wind up blowing all our minds, for sure. The full truth about why the best spy in the world was murdered and the full who and why Velvet was setup for the fall is going to be one for the ages. The team behind Captain America: The Winter Soldier have never failed to deliver before and there’s no reason to suspect they won’t this time. Since this book started it’s been one blockbuster issue after another as Brubaker has shown that he’s really the best in the business when it comes to espionage writing. This is another example of why Image Comics pretty much wins when it comes to consistent quality. If you’ve missed out on this series, the trade collection will be out soon and you should grab a copy on release day. If you’ve ever loved James Bond or the original Bourne trilogy, you won’t be disappointed by this.