It’s been one hell of a year in Gotham City, and it all comes down to this: Batman vs. The Riddler! Gotham City and the Dark Knight will never be the same! Don’t miss this special, extra-sized finale of “Zero Year!”

Picked because: After a year-long retelling of Batman’s origin, Zero Year is finally coming to an end! Not that it hasn’t been possibly the most epic and fun take on The Dark Knight’s origins, but lots of us have been ready to see Batman in the present day since Forever Evil ended. Luckily, there’s Batman Eternal for that and it’s awesome! Still, this is one seriously fun story and has what is easily the best version of The Riddler that’s ever been committed to the comic page. He’s brilliant, narcissistic and still subtle, which is a rare package in a villain. And seeing a young Batman teaming up with Jim Gordon and Lucius Fox for the first time has been one of the most incredibly fun rides in the whole New 52. Even if you were one of those who hated the idea of Frank Miller’s Year One not being part of the New 52 continuity, it’s hard to deny how well-written and rendered this whole experience has been. It’s almost sad to see it end as more stories from this time period might be equally fun, but it is time to move forward. But this issue is likely to be a major one for those who’ve followed the Snyder/Capullo run up to this point as it’s ending will tie into the next big story arc, Endgame. An ominous title for a story arc which is, hopefully, just a title and not an indication that the team may be leaving the books soon… 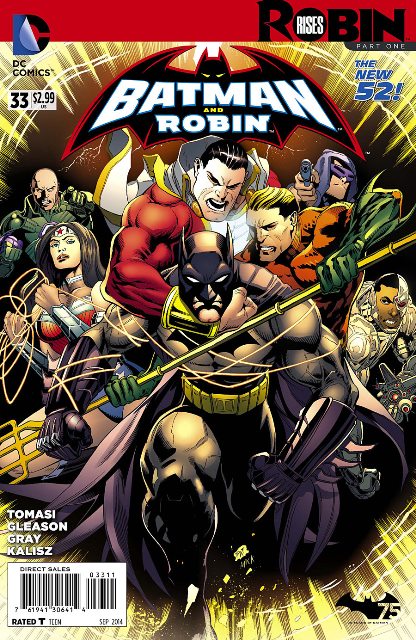 “ROBIN RISES”! Picking up right where this month’s ROBIN RISES #1 left off, it’s Batman vs. the Justice League as the Dark Knight decides to follow the Chaos Shard back to its source: Apokolips!

Picked because: Could Damian be coming back from the dead already? The promise is that by December, Batman will have a new Robin, according to series writer Peter Tomasi. After a fun, crazy ride on the Hunt for Robin, this month’s Robin Rises: Omega was a great start to this new story arc. This also marks the first time in over a year that the title has been called “Batman and Robin.” The events also tie loosely into what Greg Pak has written over in Batman/Superman with the involvement of Apokolips and the Chaos Stone. As much fun as Tomasi’s run has been, it’s also been incredibly emotional at times. Seeing Bruce deal with the death of his son and the lengths he’s willing to go in order to bring the stolen body home really cuts to the heart. This is also the series where we get to see a lot of the more sci-fi and fantastical elements of Batman as opposed to the more grounded and action/mystery takes from Batman and Detective Comics. This exploration of why Batman needs a Robin has hit on so many different aspects of who Batman is, but it’s the why Batman is that’s made it more interesting. Not the reasons Batman does what he does, but the why behind what he’s become and what he needs to be. Ultimately, that reason is made very plain: Family. This story is likely to take a few more trips into the stranger parts of Batman’s world, but it’ll be no less emotional or thrilling. Jump on here! 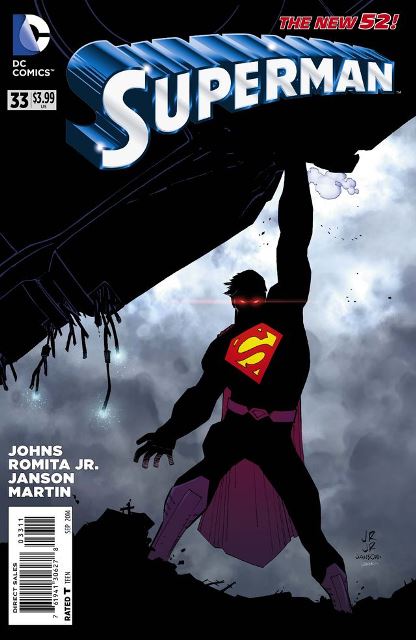 It’s up, up and away as the titanic team of Geoff Johns, John Romita Jr. and Klaus Janson continue their epic run on the Man of Steel! In their second issue, we learn more about the mysterious Ulysses and what his emergence will mean to Clark Kent and the world. Meanwhile, a mysterious figure is targeting Metropolis with strange mechanical creations…but why? And what dark secret from Clark’s past does it connect to?

Picked because: Finally, Superman is getting the treatment he deserves in the New 52! With Greg Pak writing Action Comics and Charles Soule handling Superman/Wonder Woman, things are certainly looking up for the Man of Steel. Geoff Johns and John Romita Jr. came out swinging (literally) in their first outing last issue and turned in one of the absolute best issues of Superman…ever. While the action scene from Romita are gorgeous and exciting, it’s the deeper character moments from Johns that make the book a standout. This issue is giving us even more from Perry White and the Daily Planet staff, so the wit and banter just got a nice bump. Johns’ handling of Perry is spot-on and his ideas of how to make an office staff meeting fun to read are brilliant, in typical Johns fashion. If you’ve read his previous works, you have an idea of how a Johns story unfolds and when he likes to get into deeper character narratives. This issue is going to start delving into the broader aspects of this opening arc and what it means for Superman and the rest of his supporting cast. Ulysses is a character format we’ve seen before, but never like this. When his planet of origin was revealed last issue, it was genuinely surprising, especially given his abilities. This story is off to a terrific start and there’s no sign of it slowing down! 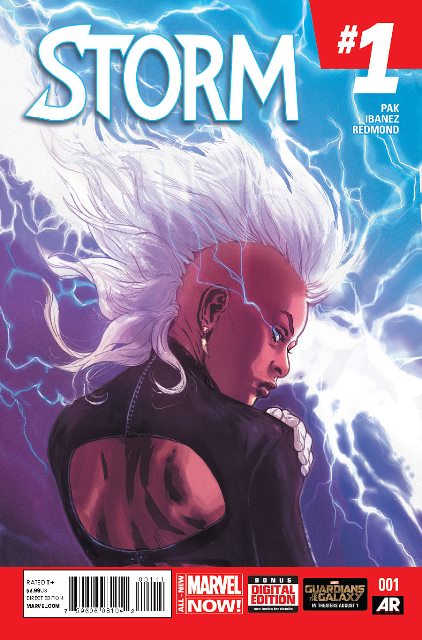 Thief. Goddess. Headmistress. Queen. The X-Man called STORM has always defied a single title. And her desire to better the world has never been limited to only her own kind. On a mission to foster goodwill and safeguard the mutant race’s continued existence in her own way, Storm will travel the globe, confronting man and mutant, god and monster and everything in between. She will overthrow tyrants, quell tsunamis and strive to see her dream for the world realized. She is STORM, a hero like no other….and the skies will tremble at the sight of their namesake.

Picked because: Marvel has been on a role lately with its solo series and it’s about time someone gave Storm another shot at it. With a capable writer like Greg Pak at the helm, this could potentially be another solid hit for the company. Storm has had solo books before, but they never really caught on due to a lack of direction or inconsistent art. This title, just from preview pages, is already making up some of that lost ground. Pak’s script is strong, but it’s Victor Ibanez’s pencils that breathe life into this story. Even as he darkens the skies with Storm’s awesome abilities, there’s still a brightness to her character as you can see the level of compassion she has for everyone coming through her every move. It’s how she should always be rendered on the comic page. Its overall approach seems to follow a similar idea to Cullen Bunn’s Magneto series, with the protagonist traveling to different places with a sole mission in mind. But where Magneto is killing the enemies of mutant kind, Storm is there to help those in need. As exciting as the title is likely to be, its uplifting nature may be what truly sets it apart. 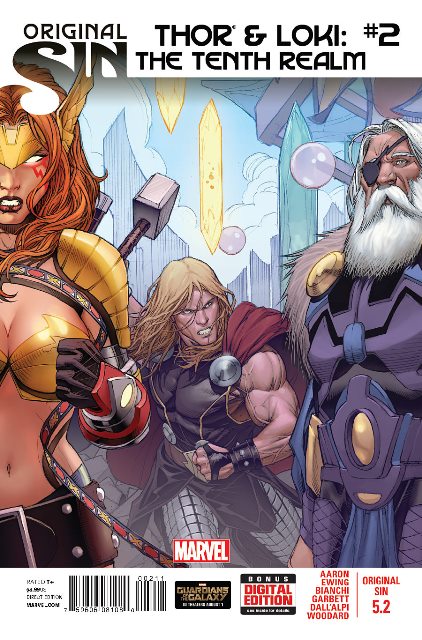 Picked because: Thor: God of Thunder and Loki: Agent of Asgard are on hiatus so the writers of both titles can get together for what would otherwise have been a crossover between the two books. This works out much better for all of us, really. Cost savings aside, being able to follow the entire story in a single title just makes so much more sense. And it means the two writers are working that much closer together and the artwork is likely to be more consistent. After last issue’s big reveals/catch up readers who haven’t been keeping up with the Loki solo title, this one is set to hit the ground running as Thor and Loki have found their way into the Tenth Realm. The Original Sin event (also written by Aaron) has brought a lot of secrets to light already, but this might be the biggest one yet. Angela (formally of Image Comics’ Spawn series and co-created by Neil Gaiman) is now, apparently, Thor and Loki’s long-lost sister. This is a much better use of her character than what happened in Guardians of the Galaxy, so as this unfolds it’ll be really interesting to see how it all melds together. The first issue was outstanding, and this one looks to pick up right where #1 left off. If you’ve been reading either Thor: GoT or Loki: AoA, this is now the book for you!

Art and cover by Walter Simonson
$3.99

Ragnarök…the Twilight of the Gods in Norse mythology…the destruction of the Nine Worlds. And now, three hundred years later, the birth of vengeance.

Walter Simonson returns to comics in a BIG way with an all-new series… and doing what he does best!

Picked because: He might not be writing Thor for Marvel these days, but Walter Simonson still has at least one more story for the Norse God of Thunder he’d like to tell. Simonson had a legendary run on Marvel’s version of Thor and now he’s bringing his particular brand of thunder to IDW for this series. As much a good old-fashioned revenge story as it is a wide-eyed fantasy tale, Ragnorok should satisfy those who’ve become unhappy with Marvel’s current direction or those who just missed seeing Simonson on a regular title every month. In the opening pages we get Thor taking on a dragon…that should sell you on this immediately, especially if you know how well Simonson draws battles. There’s a larger story coming slowly into focus, and that’s part of the fun of any new title. This might be the best time you have at the comic shop this week.