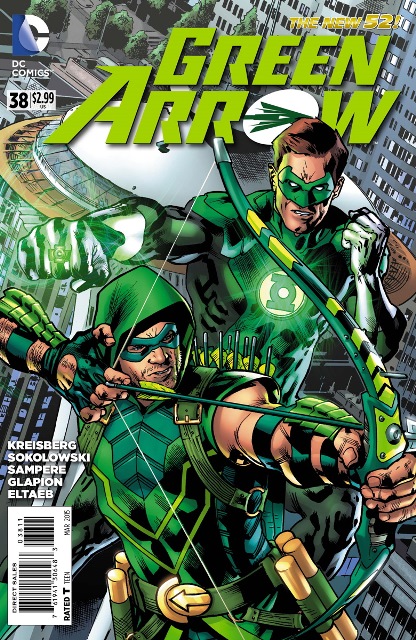 After a near-death experience at the hands of John King, billionaire Oliver Queen must fight a foe he can’t just beat with sheer force!

Picked because: So that solicit leaves out one crucial detail of this issue: It’s a Green Lantern/Green Arrow team-up! That’s right, Hal Jordan is back on Earth after the events of Godhead and Oliver Queen called in a favor last issue. These two together has made for some of the best superhero comics ever created and it’s always nice to see them team up again, even if it is a temporary thing. This Oliver Queen is becoming more like his TV show counterpart and, of course, Hal Jordan has become the leader of the Green Lantern Corps, but in this case it’s just going to be some old-fashioned superhero fun with a seemingly untouchable villain being taken to task by two of DC’s best. I have to give the writing team of Sokolowski and Kreisberg a lot of credit for their take on Green Arrow. Kreisberg is, of course, largely responsible for the success of the CW’s Arrow and now he’s bringing some of that sensibility (and Felicity!) to the comic book page. Following a run like that of Jeff Lemire’s was going to be tough, but he’s clearly not let it keep him from telling his story his way. It’s different, for sure and more in line with what you see each week on TV, but it’s still a whole lot of fun and surprisingly accessible. Now’s a good time to try this one out. 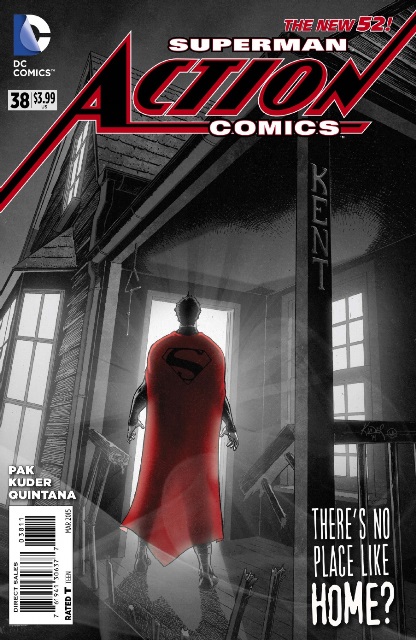 The Horror of Smallville has been unleashed on the world! Superman must stop the evil undead threat of the Ultrahumanite from crushing humanity!

Picked because: You absolutely read that right, the Ultrahumanite is back in DC Comics! He’s way scarier than he’s ever been, too. Last issue gave his full reveal and it was horrifying, yet so entertaining (with some killer art from Kuder) you couldn’t look away. His full plan and motivations have yet to be revealed, but with a tie to the previous Doomed story arc and setting him up as potentially linked to both the Phantom Zone and the creatures living beneath the surface from Pak/Kuder’s first arc, it’s like this is all coming full circle somehow. Pak has proven to be a true visionary for Superman and especially for Lana Lang who’s character has been on an incredibly emotional journey since the beginning of this creative team’s run. Another point that’s been done to near perfection is how Clark sees himself and relates to the world through his childhood experiences in Smallville and with the Kents. He’s still that same Kansas farm boy deep down that he’s always been and it’s those values that come out even when the big monsters put people in harm’s way. While Geoff Johns and John Romita Jr. are telling a fantastic superhero epic in their Superman run, this is the most personal of the current Superman books and is by far my favorite. Never miss an issue! 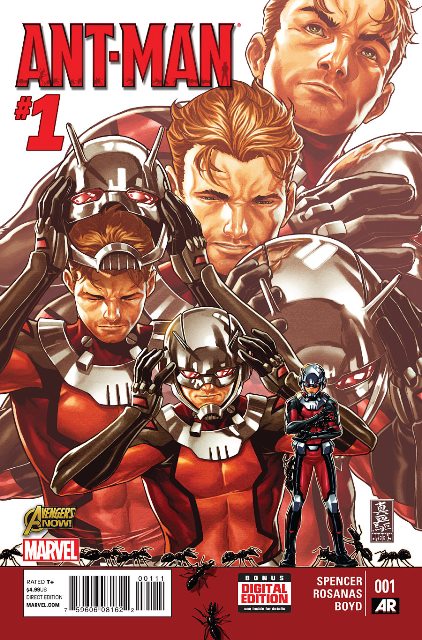 Picked because: His movie isn’t even out yet, but you can tell Disney/Marvel expect another hit so the push for Ant-Man (aka Scott Lang) will be hitting its stride about now. Spencer has a solid history writing characters with quirky personalities and mixing fun humor with some pretty twisted storytelling. The first few pages of this one are great for catching up new readers without wasting an entire issue on exposition. And there’s no doubt the mandate from Marvel/Disney was to make this incarnation of Scott Lang as much like Paul Rudd as possible without having seen the new film. The current events of AXIS will still be felt in this title for a bit, too, since Tony Stark will appear and he’s still inverted from his time in that crossover. Luckily, Superior Iron Man has become something incredibly entertaining, so having him as a potential foil for Ant-Man could be loads of fun. If the movie has you interested at all, this will be the book to pick up this week. Chances are, Marvel may have another solid solo title on its hands that just about anyone can just jump into and enjoy. 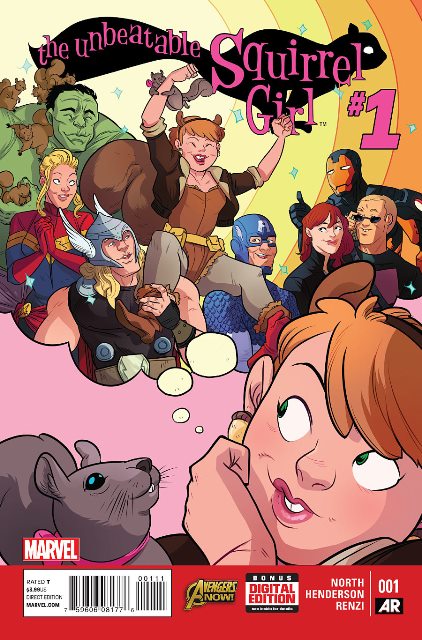 Art and cover by Erica Henderson
$3.99

Picked because: C’mon, how could you not pick this up? Marvel has made some great strides in expanding the appeal of its line and this is one of those books that will be equally fun for kids and adults. Like Ms. Marvel before, this book is aimed at attracting a new audience who were intrigued by Marvel heroes, but always felt intimidated by them. It’s accessible, it’s light-hearted, and yet it also manages to be tongue-in-cheek with the humor. That’s the real appeal for the older generation of fans. This is the book that will easily allow Marvel to poke fun at itself (you know, other than Deadpool…who really has become overexposed lately). There are plenty of action titles out there and even a few action/comedy titles (see previous pick) that will have a wide appeal, but this is something that’s attempting to tap into that audience who are growing out of the kid books and into something more. Saturday morning cartoons might not be around anymore, but we’ve still got comics like this. So, pick it up, buy it for your kids, give it to a friend; just make sure you don’t miss what will likely be one of the most talked-about books of the year.