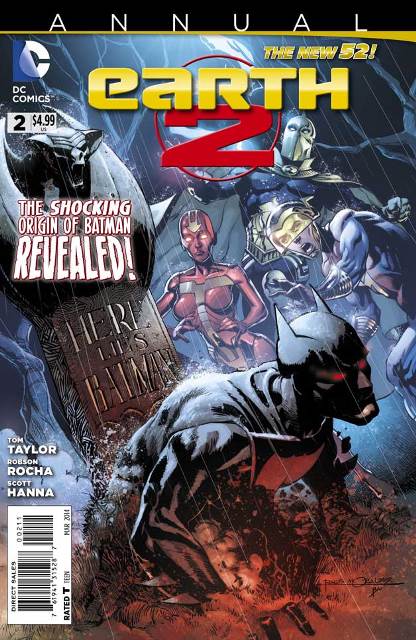 The origin of Earth 2’s new Batman is revealed. But after he tells his tale, will any of the other heroes trust him again?

Picked because: Tom Taylor had some big shoes to fill when he took over writing Earth 2 late last year from James Robinson. He’s more than lived up to that expectation. We all know the original Earth 2 Batman died in issue #1 and that’s been confirmed by this “new” Batman. His identity has been kept a secret since he debuted in Earth 2 Annual #1. Everyone from Earth 2 versions of Dick Grayson, Jason Todd and Tim Drake to Thomas or Damian Wayne have been floated as possibilities. We finally get the answer in this issue. On top of that, there’s bound to be some huge, fun action just like every other issue of this series. 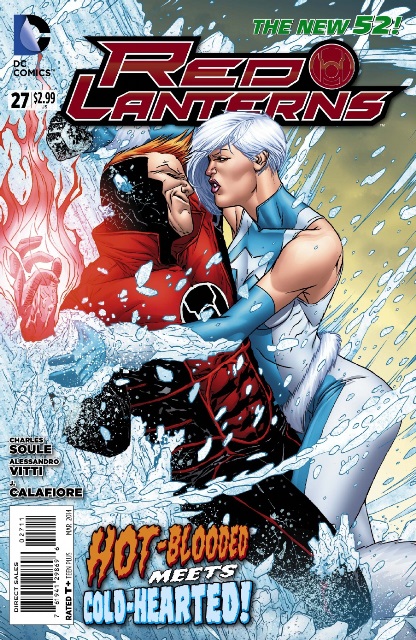 Art and cover by Alessandro Vitti

There’s a new gang in town as The Red Lanterns come to Earth!  How will the rest of the universe react to the Reds’ policing their new “jurisdiction”? And more important, how will Ice react when Guy Gardner comes a-courtin’? The cover’s a big hint!

Picked because: What a turnaround this book has had! This used to be a book that seemed to have no reason to exist. Now, it has great direction and character development. As for this issue, this’ll be the first trip of Guy Gardner’s Red Lantern faction to Earth. Guy’s relationship with Ice is a bit different in the New 52 continuity, but she’s still the only girl for him. But now that he’s gone Red, it’s not likely to be a mutual feeling. Look for this issue to add even more depth to Guy’s decision to be a Red Lantern full time. And this is no-doubt setting up for next week’s Green Lantern/Red Lanterns double-issue and Supergirl’s joining of the Red Lantern Corps!

The stage is set for the biggest SUPERIOR SPIDER-MAN story of them all! And it starts here with a goblin fight like no other: The Green Goblin vs. The Original Hobgoblin! Plus: That thing that happened at the end of #25… That thing that raised all of those questions… You don’t have to wait any longer. You’ll get your answers THIS ISSUE! Honest.

Picked because: After issue #25, it shouldn’t be any surprise this is the top Marvel pick for the week. Huge, HUGE things happened last time and there’s even more on deck. The Avengers saw what Spidey did while bonded to the Venom symbiote and it was more destructive than he’s ever been. No way they let him keep operating the same way after that. Not only that, but Peter Parker’s consciousness is alive and ready to get his body back! How did it happen? We’ll find out in this issue. Lots of artists on this one, but they’ve worked together before and all have done solo issues of Spider-Man recently so it shouldn’t be too hard to work it all out. 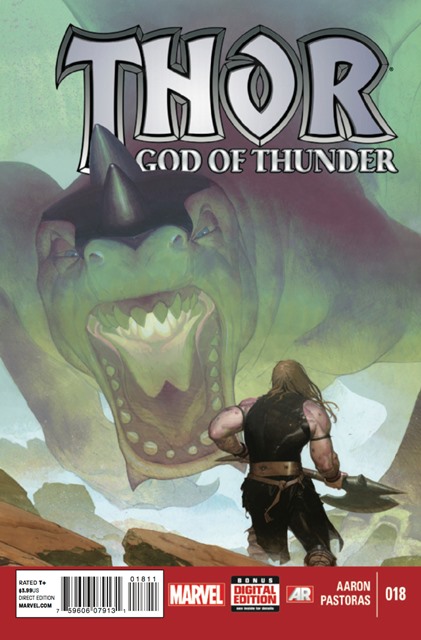 A tale of Young Thor, in the age of the Vikings. Here be a dragon. ‘Nuff said.

Picked because: The prelude issues between story arcs of this title have been some of the best comics of the last two years. Jason Aaron writes an incredibly fun young Thor and now he’s putting him up against a dragon? Sold! But there’s no way this is all action and no character. If we’ve learned anything about this series, it’s that character always comes first. It’s likely this will be a great jump-on point for new readers, too. If you haven’t tried it before now, this might be the best opportunity yet. 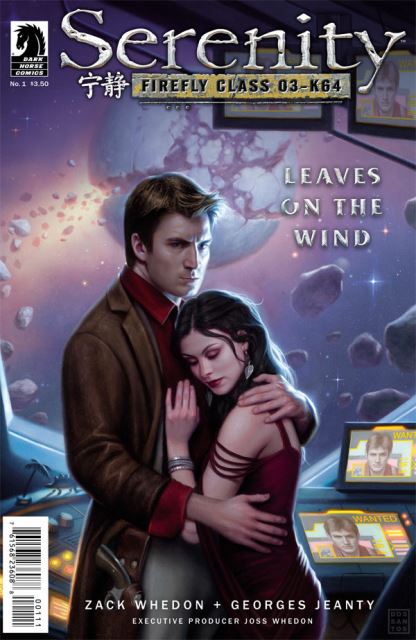 Serenity: Leaves On The Wind #1 – Written by Zack Whedon

Malcolm Reynolds’s crew shook the ’verse to its core when they laid bare the crimes against humanity undertaken by their sinister government—the Alliance. Always outlaws, Mal, a very pregnant Zoe, new pilot River Tam, and the other surviving crew members are in greater danger than ever. Meanwhile, everyone is asking the same question . . .

Picked because: We may never get a proper sequel to the incredible film, Serenity, but this might be the next best thing. This is the start of a six-issue miniseries picking up right after the events of the movie and is written by Firefly creator Joss Whedon’s brother, Zack. Zack had a hand in many of his brother’s properties, including Firefly, so this one will definitely feel like we never left. There have been a few Firefly and Serenity comics over the years, but this one stands above them already by giving fans what they’ve wanted for so long: advancing the epic story we got in the Serenity film. If you’re a hardcore fan or new to the ‘verse, you should check this one out. 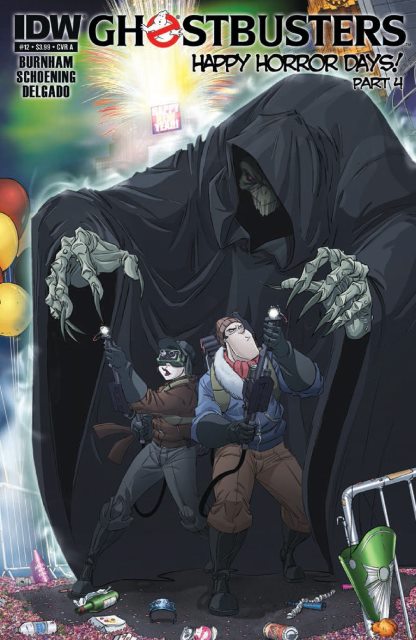 The end of the year is a hectic time for most businesses, and the Ghostbusters are no exception. Beset from all sides by a surge in spectral activity over this particularly busy season, they’re looking forward to a little bit of a break once the new year hits. But recent supernatural symptoms shown by the City that Doesn’t Sleep are coming to a head, and the Bogeyman has arrived to take the city’s future!

Picked because: Erik Burnham’s run on this title has been a love letter to Ghostbusters fans. It doesn’t matter if you love the films or the 80’s cartoon, this book is for you. And now, one of the greatest villains from the cartoon is finally making its way to the book: The Boogeyman! Now, as it turns out the Boogeyman can take on many forms/looks and might not be the exact same from the cartoon, but with Burnham’s history on the book, there’s no doubt this one will be equally dangerous/creepy. For those who’ve slept on this one until now, it’s time to wake up. The Boogeyman might be hiding under your bed…so who you gonna call? 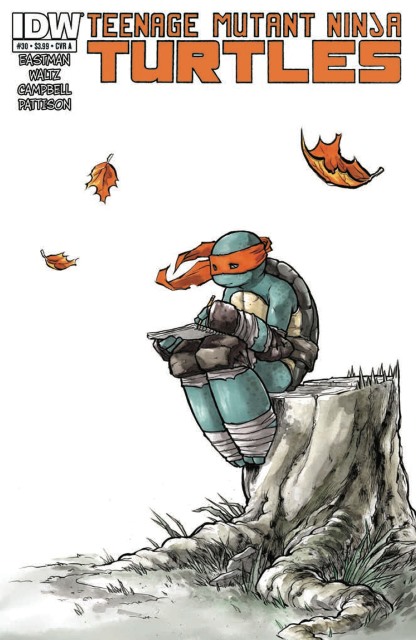 The Turtles struggle to recuperate in Northampton. Each Turtle deals with the new status quo in his own way, and each feels lost. But can they find their way to being a family again as the past haunts them?

Picked because: This story is exactly what the Turtles needed to get some new life in them. City Fall was one of the greatest epics in TMNT history and the follow up is being handled with great delicacy and heart. Having Michelangelo narrate the story though journal entries is a nice touch. Seeing the struggle of each Turtle and their new companion is probably the most deeply personal story this team has ever had. Those of us who loved the TMNT back in the 80’s and 90’s have a lot to be happy about with this one. Make sure you get this one!