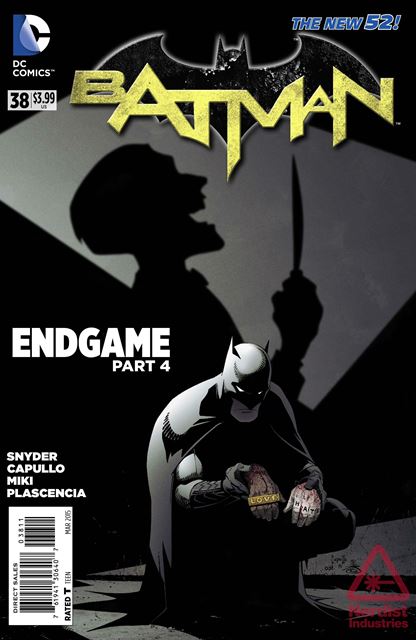 “Endgame” part 4. The Joker is back! This time, no more funny stuff. And in the backup story, five Arkham Asylum escapees share their encounters with The Joker!

Picked because: Joker’s new viral toxin is infecting everyone it touches, but it seems Joker’s plan is about way more than that. He’s reveling in the panic of Batman and his allies to find a way to stop him and it’s some of the most sadistic and chillingly funny stuff Joker has ever pulled off. Snyder plays with us by giving payoffs to little things from “Death of the Family” (Joker under the bed) and showing us that Joker is way more than what’s on the surface. Could he be immortal? Has he unlocked that secret? Capullo’s art will tingle the spine in ways you never thought possible as his new Joker design is as slick and modern as it is classically horrifying. This is a classic revenge story, but it’s the bad guy who’s getting even this time. No one is safe here and there’s a genuine feeling of dread that someone is about to die. Could it be Joker? Maybe Alfred? Possibly even Jim Gordon? It’s hard to say, but there’s never been more tension in a Batman story. With each page turn, you never know what’s waiting on the other side. Don’t miss this or any issue of the Snyder/Capullo run! 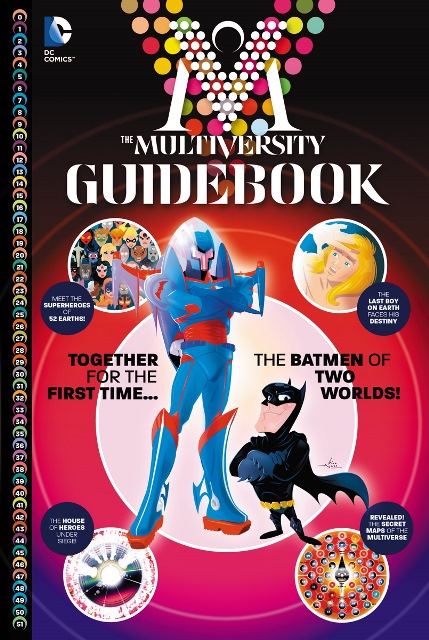 The guidebook to the greatest adventure in DC’s history is here!

With a detailed concordance featuring each of the 52 worlds in the Multiverse, a complete history of DC Comics’ universe-shattering “Crisis” events, a map of all known existence, AND an action-packed dual adventure starring Kamandi of Earth-51 alongside the post-apocalyptic Atomic Knight Batman of Earth-17 and chibi Batman of Earth-42, this 80-page mountain of MULTIVERSITY madness cannot be missed!

The MULTIVERSITY GUIDEBOOK contains everything you ever wanted to know about DC’s parallel worlds and their super-heroic inhabitants. Meet the Agents of W.O.N.D.E.R. The Light Brigade, the Super-Americans and the Love Syndicate! Meet the Accelerated Man, Aquaflash, BiOmac and more!

Overflowing with today’s top artists and completely written by Grant Morrison himself, readers of the DC Universe can’t afford to pass up this oversized, sixth chapter of MULTIVERSITY!

Picked because: You read it up there, right? It’s pretty much a giant map explaining the multiverse to those who might be unfamiliar and to those who’ve been reading along. This is a huge, almost trade-sized, issue that spells it all out. No real story…or is there? Grant Morrison has thrown more than a few curve balls during this experiment and it’s going to connect into Convergence somehow. This will be a must-buy for any and all DC fans, regardless of your favorite era. 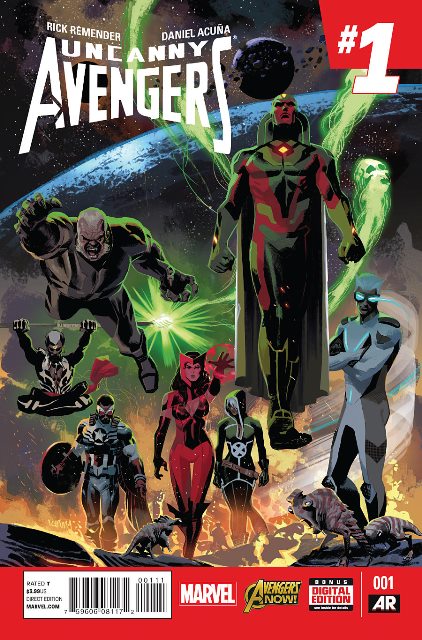 Picked because: AXIS is over and now we have a relaunch of Uncanny Avengers with the same writer, but a change in artist. The biggest reveal of AXIS was, of course, that Magneto is not the father of Scarlet Witch and Quicksilver (take that Fox!), but are likely to be revealed as Inhumans since Marvel is really pushing that title and its characters out front these days. This fully explains the “No More Mutants” teaser image from a couple of months ago that some assumed would be part of Secret Wars and others thought could be the end of mutant in the Marvel Universe all together. Well, mutants aren’t going anywhere, but the Secret Wars tie-in could still happen. Remender returns to write this series as he did the last one and fans of that book have no reason not to continue with this story. The focus this time will be on Scarlet Witch and Quicksilver with a decent enough entry point for new readers, if they’re curious. Although there are still going to be some concepts that might go over a few heads (Counter Earth in the opening pages). But of all the Avengers titles, Uncanny was the easiest to jump in before and became the more entertaining of the bunch. This is a fresh starting point for the curious and still a continuation for those who’ve been in from the start.

Picked because: Oh it’s going down! The opening conflict between Thors sounds almost like some of the hyperbolic, hateful language that was used on Twitter following the reveal that a woman would take over for the Odinson all those months ago. Oh, some of you still haven’t changed, either. Even in the face of one of Marvel’s best books in years. Or with the formidable talents of Aaron and Dauterman on board. The pages speak for themselves, but THIS. IS. THOR! We all knew this conflict was inevitable and I think both Thors will be believers when it’s over. One will believe in a new wielder of the hammer and the other will finally fully believe in herself. This plot has thickened quite a bit over the last couple of issues as threads from the final God of Thunder stories get pulled together to form something new. It’s incredibly well-drawn, too, with the truly capable pencils of Dauterman doing the driving. Aaron’s scripts are always on-point with plenty of banter and wit spread out between the panels of epic fights and heroic revelations. The new Thor is proving to be quite the fun character to read each month and seeing her interact with classic villains and the old Thor has been done perfectly so far. I can’t wait for more! 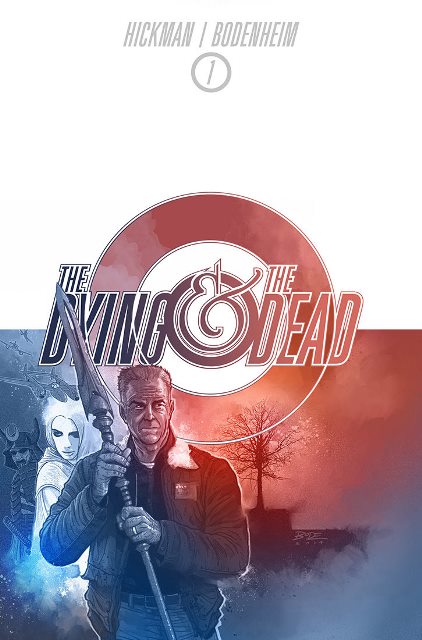 The Dying and The Dead #1 – Written by Jonathan Hickman

Art and cover by Ryan Bodenheim
$4.50

A murder at a wedding reveals a fifty year-old secret. At great cost, a man with a dying wife is given the opportunity to save her. A lost tribe is reborn in another time. Seemingly disparate events that force relics from the Greatest Generation to come together for one last hurrah.

Brought to you by award-winning writer JONATHAN HICKMAN and fan-favorite artist RYAN BODENHEIM, THE DYING AND THE DEAD is high adventure meets end-of-life care.

It’s Indiana Jones for Old People. There are no fedoras, only bedpans.

Picked because: Sometimes you just have to pick something up because it sounds like equal parts fun and absurd. Hickman may be hard to follow on Avengers, but his creator-owned titles are usually right on. East of West is one of Image’s best titles, so you know what you’re in for if you’ve tried that out. And don’t let the price tag scare you off (it’s coming down next month), this is an extra-sized issue to help introduce everyone to this crazy new world. Hickman is known for his long-form storytelling, too, so if you jump in get ready to stick it out. It’s hard to walk away once he gets going. And that it’s another creator-owned book for Image means you’re definitely going to get your money’s worth.