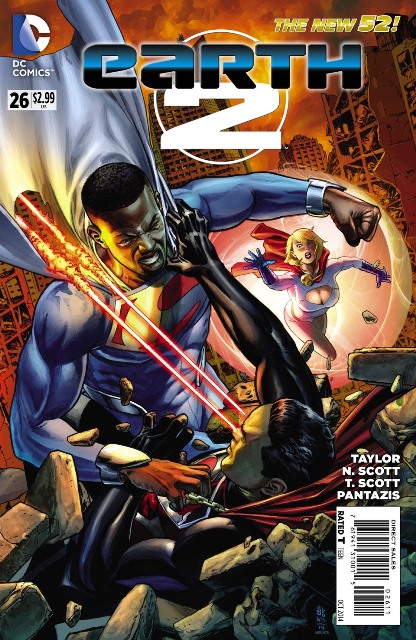 Val and Lantern battle Superman with Earth’s fate hanging in the balance when a familiar faces arrives on Earth 2 via the Boom Tube to turn the tide!

Picked because: This isn’t just the end of a story arc, it’s the culmination of everything that’s happened since issue #1 and the final issue for artist Nicola Scott. Scott has been the consistent tie for this title, working with both original series writer James Robinson and current scribe Tom Taylor. She’s easily a Top Five artist for DC Comics and it’s going to be a real shame she’s no longer drawing this amazing title. However, this issue stands to be send her out with a real bang as it’s finally time for the big battle between Earth 2’s remaining heroes and the forces of Apokolips. Val-Zod had a great moment at the end of issue #25 and what it’s leading to should be no less than absolutely epic. But there’s sure to be quite a few twists at the end of this one, too, as we’re also getting ready for the launch of the new weekly, Earth2: World’s End in October. The setup for that is all over this issue, which we’ll get to after the Futures End event next month. This is also the big return of the Earth 2 Supergirl and Robin (aka, Power Girl and Huntress), and they’re likely going to find a vastly different world than what they left way back in issue #1. 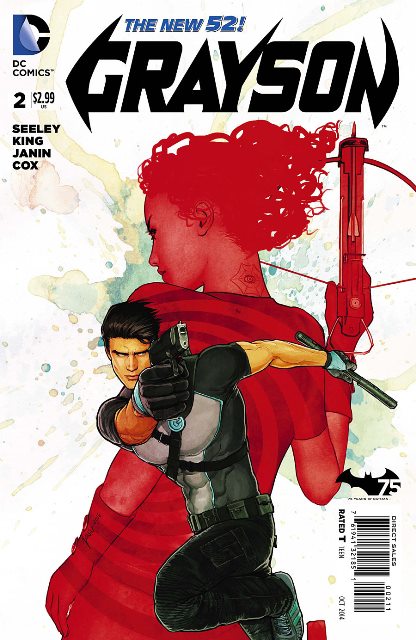 Art and cover by Mikel Janin

Grayson digs deeper into the mysterious organization known as SPYRAL and learns more about his new partner – Helena Bertinelli!

Picked because: Issue #1 was one of the biggest surprises of the year and it doesn’t look like this one plans to slow that momentum down. Grayson is all about giving the former Robin/Nightwing a chance to play undercover superspy and while that might sound odd at first, the execution of it has been spot-on so far. Tim Seeley and Tom King bring a lot of interesting elements to the table, especially with this new version of Helena Bertinelli and the further exploration of the shadow group Spyral. Batman is involved, somewhat, but unlike when Grayson was running as Robin or even as Nightwing, he can’t expect any real help from his former mentor. They’re only in communication when they have to be and neither can play backup to the other as the world is still under the impression that Dick died during the invasion of the Crime Syndicate in Forever Evil and Batman has his hands full (see Batman Eternal, Detective Comics and Batman and Robin for details). While this all has a very temporary feel to it, the ride so far has been a fun one and shows DC is still willing to take real chances with both new and old characters. 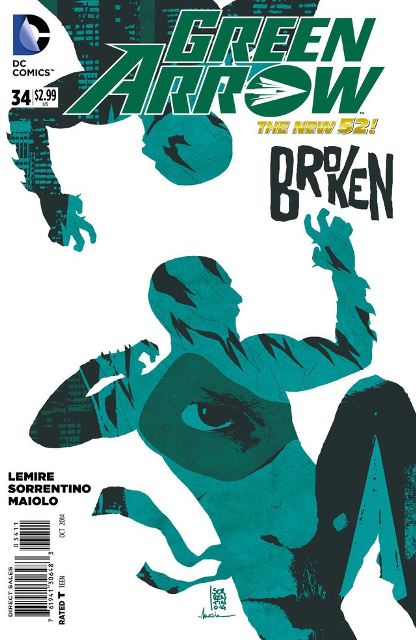 Art and cover by Andrea Sorrentino

If Oliver Queen is to survive, he must face not only his past sins but also his current ones, symbolized by Richard Dragon and his Longbow Hunters!

Picked because: We’re losing yet another creative team soon, and this one really stings. Jeff Lemire and Andrea Sorrentino have made Green Arrow THE premiere title of the New 52. Seeing the past running parallel with the present, much like the TV show Arrow, works incredibly well for this character. Not to mention, that Sorrentino art! This team is one of the best one-two punches DC has, but Sorrentino pretty much steals the show with every issue. His layouts and the contrasting lines and color work from Marcelo Maiolo put most of DC’s other titles on notice. This is the high bar and you should all strive to meet it. But let’s not forget about the incredible amount of character development Oliver Queen has gone through during Lemire’s time on the title, too. He’s become a capable leader and a hero that’s easy to root for while he’s also dealing with some emotionally draining circumstances, especially with his half-sister Emiko and the revamped Shado. The back story with Diggle and the rise of Richard Dragon and the Longbow Hunters has been so much fun to read, too. This is the end of the “Broken” story arc, with next month’s serving as a Futures End tie-in and epilogue as we say goodbye to this storied team. This is one for the books, folks. The end of what might be the best single run on Green Arrow…ever. 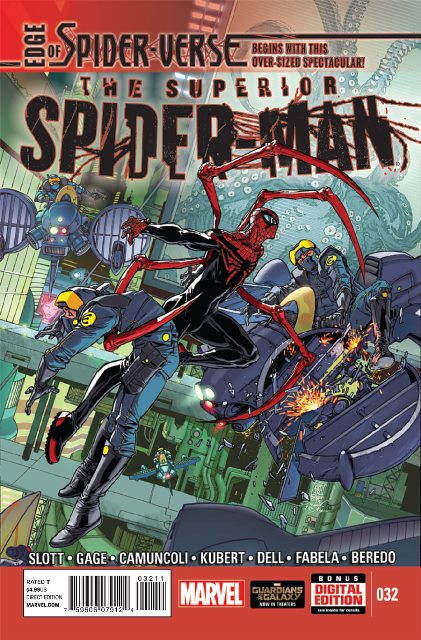 Art and cover by Giuseppe Camuncoli

SUPERIOR SPIDER-MAN KICKS OFF THE EDGE OF SPIDER-VERSE!

• How is the Superior Spider-Man still around? Where is he? What is he doing? The road to SPIDER-VERSE STARTS HERE!

Picked because: Wait, wasn’t this title over? Oh, but there was that moment when Spider-Man (when he was mind-swapped with Doc Ock) disappeared for a while at the end of an issue. Now we get to see where he went and what happened. Apparently, it was to the world of 2099 and he wound up getting into a bit of trouble. Hard to imagine, right? But in any case, this is where the next big Spider-Man story, Spider-Verse kicks off and it looks to be one of the most expansive stories the webslinger has ever had. Slott’s current run on Amazing Spider-Man has been loads of fun so far, but it’s also felt entirely fairly contained, save an Original Sin tie-in here and there. What’s even more interesting though is how the story is starting to call back to the J. Michael Straczynski’s run, which has been scarcely referenced for a long time now. Fans who’ve missed Ock’s trademarked smugness and superiority will love to take a trip to the not-so-distant past (future?) and then get ready for things to get really wild after that. 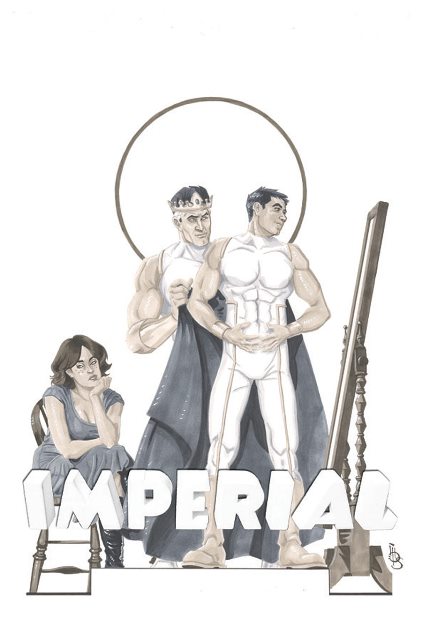 Mark is two weeks out from making the biggest decision of his life. But which big decision will it be? Taking the ring of the woman of his dreams and becoming a married man? Or taking the helm of the world’s only superhero and becoming the next Imperial? STEVEN T. SEAGLE (THE RED DIARY/ THE RE[A]D DIARY, Genius, it’s a bird…) teams with MARK DOS SANTOS for a buddy book with commitment issues.

Picked because: Who doesn’t love a good neurotic superhero story? It’s fun to take the superhero genre and turn it on its head every so often and what better way than a kind-of buddy cop story? You’ve got one very stoic hero and one who’s so unsure of himself he actually apologizes for the type of underwear he chose and then proceeds to explain himself. The awkward humor will be all over this one, so fans of that style don’t want to miss this. Steven Seagle and Marc Dos Santos are still relative newcomers to the comics medium, but already getting their own ongoing with Image Comics is quite a step forward. And the world could always use more smart, funny books. Imperial doesn’t look to be reinventing the wheel, but it does have its own flavor of superhero satire that should tickle the funny bones of those who like cracking wise about the semantics of Marvel and/or DC superheroes.