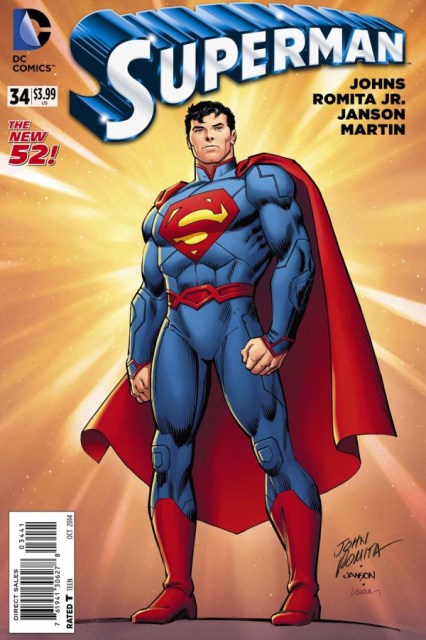 Geoff Johns and John Romita, Jr. continue their epic Superman run with “THE MEN OF TOMORROW” chapter 3! Introducing the bizarre villain known as The Machinist – the man behind the recent technological attacks on Metropolis. But what is his strange connection to Superman? Where is he from? And what does The Machinist want with The Daily Planet? Plus, the mystery behind the disaster at the Ulysses Research Lab sends Clark on an investigation that will reveal a dark secret from his past.

Picked because: It’s the first full appearance of The Machinist, who we’ve been teased with for the last two months of Geoff Johns’ and John Romita, Jr.’s run. New Superman villains have been hit-and-miss for the last few years (largely miss) but Johns has a way of creating memorable characters. He’s certainly hit it out of the park with Ulysses. What a great addition to the Superman supporting cast! He’s relatable, funny and easy to root for. Even better, Johns has made the New 52 Superman feel that way, too. Last issue felt almost like a wrap up chapter, but it’s hardly the end of this arc. And with the way Johns writes the other supporting cast members, especially Perry White, this team needs to be on the book for a long, long time. Johns’ handling of the Daily Planet dynamic and the nature of this modern Clark Kent is so spot-on it’s a real head-scratcher that no prior creative team could just figure this out. While Romita’s art isn’t going to please everybody, he’s actually breathed new life into a character that was on the verge of petering out. It’s a fresh take on Superman that actually feels fresh instead of just paying the idea lip-service. It’s so nice to finally call the main Superman title must-read comics! 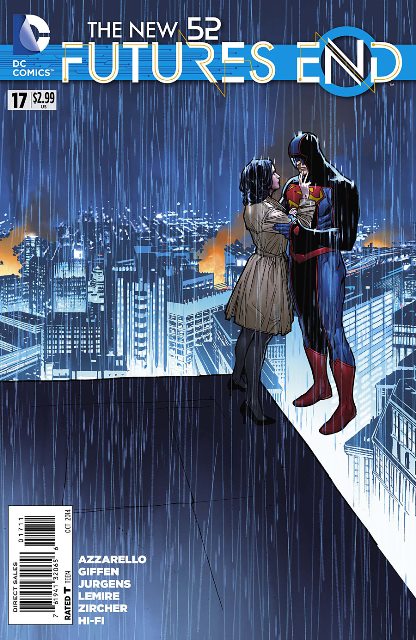 Who is the Masked Superman? What does his identity have to do with last week’s startling ending? The answers will shock you as the entire New 52 gets ready to jump five years into the future!

Picked because: We’ve been asking that question for months now: Who is the masked Superman? It looks like we’re going to find out just before the Futures End event that jumps all DC titles five years into the future for one month. Of course, this “future” is totally hypothetical and likely to drastically change as this event winds down next year. Lots of guesses, hypothesis and theories (totally different things for those who didn’t know) out there, but few answers have come to light. What we can say with virtual certainty is: that’s not the Superman we know under there. In all likely hood, it’s not even Superman at all but someone who’s taken up his title. Futures End has been a back-and-forth book for a while in terms of quality, but it’s always the place to go for out-there DC concepts and some serious “WTF” moments. According to DC Comics, we’ll be getting two big shocking moments in this issue, and with September’s event looming, that’s likely not just hype. Jumping on here might be a bit strange and unwieldy, but there’s still likely to be a few moments that’ll get your attention either way. 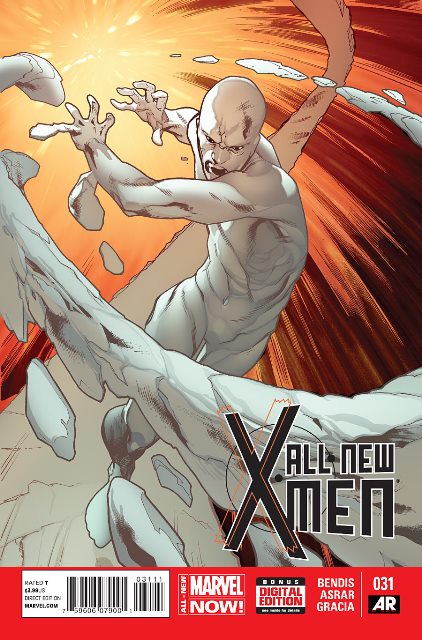 • For someone who’s said she doesn’t find him particularly pleasant to be around, Laura seems to have taken an odd interest in Warren.

Picked because: This issue is setting up something Bendis has been clamoring for a long time: a crossover between the main Marvel ‘616’ universe and the Ultimate Marvel U. Sure, we had Cataclysm, and it was pretty bland, but that was something that could have easily been written off as not mattering in the long run. This time, the current main X-Men title is crossing over with Bendis’ other fantastic title, Ultimate Spider-Man! The crossover event was advertised as beginning in issue #32, but this is where the hole between universes will be exposed again and shown to a group of highly-important heroes in the primary Marvel U. And even though the AXIS event and Time Runs Out are stories taking place in the hands of other writers, it’s possible this could have something to do with the larger meaning behind those two Avengers events, especially since AXIS is supposed to be a team-up of X-Men and Avengers. Could the seeds of an eventual universe merger be planted here first? Could the Ultimate Universe be on the verge of ending (my guess, due to lagging sales and poor reception of all books except Spider-Man)? In any case, this is an historic moment for both titles and shouldn’t be missed by fans of either. And if the relationship between Angel and X-23 keeps going the way it is now, the entertainment value from that alone makes this worth picking up.

Guardians of the Galaxy #18 – Written by Brian Michael Bendis

• You know you want to know how Star-Lord got back from the Cancerverse.

• And didn’t Nova go in there with him? Guess he’s not into the whole “no man left behind” thing.

Picked because: What happened to Richard Ryder? We’re finally going to find out! Fans have been asking (sometimes not so nicely) since the debut of the new Guardians of the Galaxy series and the return of Star-Lord what happened to their favorite member of the Nova Corps. This Original Sin tie-in should answer a couple of burning questions, but likely leave a few more in its wake. Don’t worry too much, though; it should also serve as a pretty decent jump-on point for those who’ve been skipping it up to now. Those folks should also check out Star-Lord’s solo title and the new Rocket Raccoon book while you’re at the local comic shop tomorrow. Not really necessary reading, but fun books nonetheless. Bendis has certainly played the long game with this story and once the truth is revealed it’ll all probably make a lot more sense. Plus, we get to recount the battle between Star-Lord, Nova and Thanos in the Cancerverse! There’s plenty of fun coming from this one already and that’s just in the first couple of pages. If you liked the movie, it’s time to get on this book. 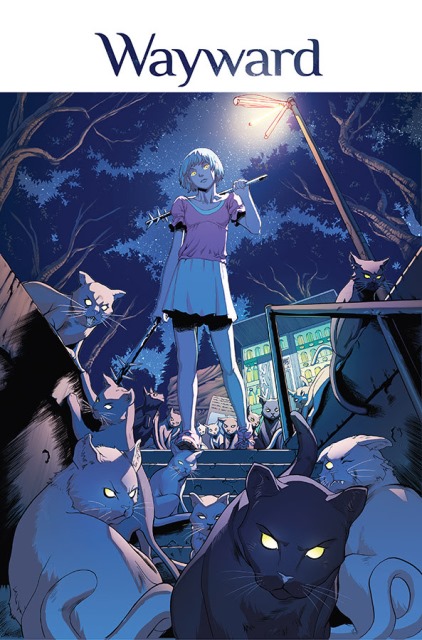 Art and cover by Steve Cummings
$3.50

Writer Jim Zub (SKULLKICKERS, Samurai Jack), penciler Steve Cummings (Legends of the Dark Knight, Deadshot), and color artist John Rauch (INVINCIBLE) team up to create a rich and vibrant Tokyo in WAYWARD. However, this Tokyo just so happens to be filled with monsters of myth and legend laying in wait for one Rori Lane’s arrival.

Rori’s a misfit teen who travels halfway across the world from Ireland to make a new home in Japan with her mother. From the get-go there are some cultural adjustments to be made and Rori feels like a fish out of water—but things take a turn for the weird when she begins glimpsing things, creatures, that no one else can see.

Picked because: Supernatural titles don’t have to be all doom, gloom and scares. Turning them into something fun with well-written characters and vibrant visuals can open up a lot of possibilities for the creative team and the readers. Wayward looks like it intends to do just that with one of the strongest creative teams in comics. Zub is known for writing great adventure stories that mix in a good bit of humor, so adding in a new spooky element sounds like something he can stretch his creative muscles with. And with Steve cummings on art, this book is worth at least one issue on his strengths alone. But the story sounds intriguing and like we’re in for something similar to Buffy The Vampire Slayer meets The Woods and Lumberjanes. The early buzz is very positive around the title and that the Tokyo setting actually feels like the real city rather than a caricature of it puts it a step above other books written by people who’ve obviously never visited their setting city. If you love a good mystery with a creepy yet vibrant setting and plenty of action and humor, give this one a look tomorrow.