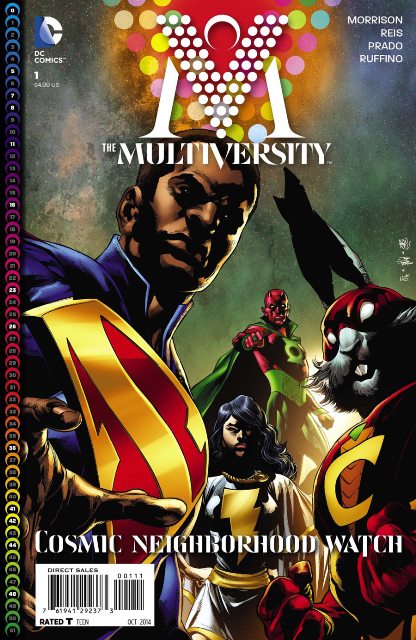 The Multiversity #1 – Written by Grant Morrison

The biggest adventure in DC’s history is here!

In issue #1, pencilled by superstar artist Ivan Reis (AQUAMAN, JUSTICE LEAGUE), President Superman of Earth-23 uncovers a threat to all Reality so apocalyptic it will take a team of incredible heroes from across the Multiverse to face it – including Captain Carrot, like you’ve never seen him before!

But even with a multitude of alternate worlds to choose from, where every variation is possible, can anyone hope to prevail against the onslaught of ultimate evil and undying hatred – in the unstoppable form of a one-time cosmic defender with unimaginable powers?! Join us, if you dare, for the beginning of THE MULTIVERSITY!

Picked because: This books was in the works for so long a lot of fans had written it off as being stuck in development hell, never to be seen by anyone but Morrison himself. But now, we’ve got the first issue of what might be the most expansive exploration of the DC Multiverse yet. Each issue is an anthology-style setup with multiple individual stories looking at a different Earths in the Multiverse. Some characters will be all-new and some will be different versions of classics. There’s even talk that some will be versions from the pre-New 52 DC Universe. But, there’s also an overarching story floating in the background that will eventually link them all together. And with so many stories packed into each issue, the price point is a dollar higher than the usual $3.99. Still, with an artist like Ivan Reis drawing this issue, it’s not one to be missed! Morrison is likely to take a very out-of-the-box approach to this kind of storytelling and that’s perfect for readers since he’s usually at his best when he’s not constrained by 70+ years of continuity. This is Morrison making it up as he goes along, even though he’s already mapped and plotted his entire story long before issue #1 ever hits the shelf. For fans who’ve been wondering if certain favorites were going to be part of the New 52, your answers likely lie within the pages of The Multiversity. Pick it up tomorrow and get ready for one of the craziest trips you’ve ever taken. 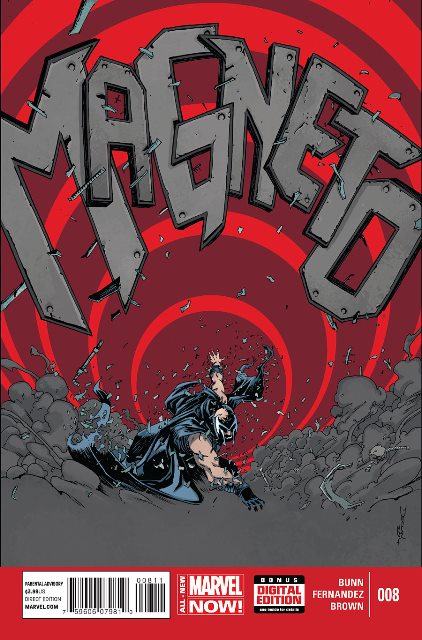 • MAGNETO was once arguably the most powerful mutant on the planet.

• But after his latest tenure with the X-Men, his powers have been reduced to a whisper of what they once were.

• Maddened by the fact that he struggles to safeguard mutantkind in uncertain times yet his own mutant gift wavers, to what lengths will Magneto go to become the Master of Magnetism once more?

Picked because: Magneto’s journey has taken a lot of interesting twists and turns in Cullen Bunn’s incredible solo title, but now as we head toward AXIS, things are about to get even deeper. We already know Magento’s title will serve as a precursor to the next big Marvel event, but it’s not officially starting for another month. However, his attempts to repower himself fully are reaching a boiling point and it looks like this will be a major milestone issue as we lead into AXIS. If you haven’t been reading Magneto, you’ve been missing out on one of the best Marvel titles running today. This book is doing for the character what Jason Aaron’s Thor: God of Thunder did for Thor. It’s put the character in a more simplified position, but without losing any of what makes him unique and fun to read. While Thor’s title has added many complex layers to the story, Magneto’s has stayed along the same track, putting the character in the position to really break down those who would harm the mutant community. Magneto’s time with the Uncanny X-Men was fine, but this is where the character truly belongs. He’s not interested in leading a team so much as he wants to make the world a legitimately safer place for mutants, by any means necessary. The first phase was tracking down those who had committed crimes against mutants and now he’s beginning phase two. This would be a good time to get in on this book and see what everyone’s been talking about.

The Fadeout #1 – Written by Ed Brubaker

Art and cover by Sean Phillips and Elizabeth Breitweiser
$3.50

Hollywood – 1948. A noir film stuck in endless reshoots. A writer plagued with nightmares from the war and a dangerous secret. An up-and-coming starlet’s suspicious death. And a maniacal Studio Mogul and his Security Chief who will do anything to keep the cameras rolling before the Post-War boom days come crashing down. THE FADE OUT is the most ambitious series yet from the award-winning Noir Masters.

Bonus: This 40-PAGE FIRST ISSUE features more story pages, as well as exclusive back pages articles that are only in these single issues!

Picked because: Ed Brubaker with Sean Phillips and Elizabeth Breitweiser. That should be reason enough, but I know you came looking for more. The team of Brubaker and Phillips should be familiar to many readers as they’re responsible for great series like Criminal, Incognito and, oh yeah, Fatale! Brubaker’s abilities to craft a noir mystery are second to none and that art is going to leave fans drooling for more. Make sure to have napkins and/or a bib handy before reading. And getting 40 pages in the first issue is nice bonus, too. It’s titles like these that remind us we’re definitely in the second golden age of comics. Superheroes are fine and even have some great literary stories in their history, but the recent crop of Image books shows how to use the comics medium to its fullest potential. With someone like Brubaker now exclusive with the company, expect even more incredible works to make their way onto shelves in the coming years. And if Fatale is any indication of what we might be in for, getting in on this first issue is a must.

An airliner vanishes en route without a trace! It’s the crisis that brings together, in a historic team-up for the first time ever, Street & Smith’s super star trinity: The Shadow! Doc Savage! The Avenger! This historic cross over is 75 years in the making, JUSTICE, INC. begins here, spawned by a horrific tragedy of death and destruction secretly orchestrated by some of the most powerful and unexpected villains in the history of the pulps! Chapter 1 (of 6): “The Time Machine!”

Picked because: Pulp era heroes have been undergoing a bit of a revival in the last couple of years and this crossover is one fans have been asking for since the characters first hit it big. Michael Uslan had a nice mid-tier hit with his Green Hornet/The Shadow crossover miniseries, so it seems reasonable he’d do well with a project like this one. These kind of releases are great for introducing new fans to the world of pulp heroes without bogging them down in too much of the mythology. The mystery story is definitely there, but it won’t be so heavy on noir tropes that the fun gets lost. These guys were stars of radio serials for a long time, so keeping a quick pace is a must for them. And there’s nothing wrong with a classic, after all.