Welcome to another exciting edition of New Hotness! Once again, Russell picks his top books to grab next Wednesday Tuesday at your local comic shop or online. Wait, Tuesday? What happened to Wednesday? It’s Christmas week, so we get our books a day early! What looks fun? Which titles have major happenings? Is there a new book you shouldn’t miss? Find the answers to those questions and more right here each week!

Forever Evil #4 – Batman vs. Lex Luthor. That’s not reason enough? O.k., it’s way bigger than just that. The Justice League is locked inside the Firestorm Matrix and it’s set to blow. Only Batman and Catwoman escaped the Crime Syndicate and now they’ve got to contend with Luthor’s forming Injustice League AND Deathstroke’s hunting party who’s out to kill all who oppose the Syndicate. There’s also that little thing about Owlman plotting to take out Ultraman and the rest of the Syndicate…with Nightwing’s help! Oh, and Batman has a certain fear-fueled power ring left over from Sinestro’s invasion of Earth a little while back.

The second half of Forever Evil starts here and the stakes haven’t been higher for this incarnation of the DC heroes. When Luthor and Batman butt heads, it’s always full of great banter. And this is Geoff Johns we’re talking about. There’s no way he lets this pass without a great battle of wits… And fists.  And let’s not forget how awesome David Finch’s art has been on this one. His gritty style has been absolutely perfect since issue #1. 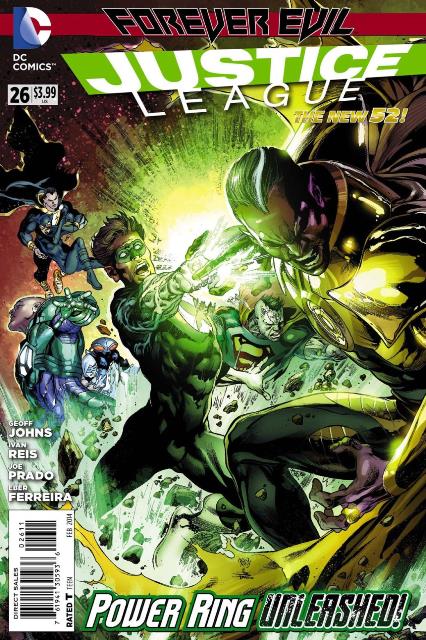 Justice League #26 – Speaking of crazy Forever Evil happenings, if you’re not buying any of the other tie-ins, you should probably be buying this one. After the crazy happenings of issue #25, there’s likely to be some major fallout. Plus, is that Sinestro on the cover?!? Oh yes, and it’s going to be awesome seeing him duke it out with Power Ring, the fearful Earth 3 version of Green Lantern.

While the main title has focused on moving the overall story forward, it’s this title that’s added a lot of depth to the Crime Syndicate. Each issue since Forever Evil began has given us needed background info on the individual members of the villain team. And after the big reveal in issue #25, things are going to get even more complicated for Owlman, Ultraman and Superwoman. There’s also that Ivan Reis artwork. He and Geoff Johns really are one of the best teams comics has ever had. 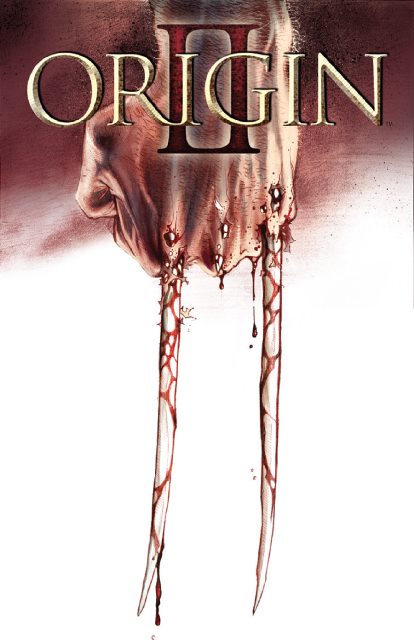 Origin II #1 – This one sounds more like what we were hoping for out of the first Origin. Wolverine’s story is usually more interesting when we don’t know every little detail of his past, but writer Kieron Gillen is picking things up when Logan is living among a pack of wolves and has given up the idea of being part of humanity. Of course, something is going to happen that causes him to come back and that something goes by the name of Sinister. Well, Dr. Nathaniel Essex at this point, but we all know where he winds up. Since it all takes place in the early 20th Century, it’s going to have a really interesting feel.  Gillen is approaching it as a period-piece novel more so than superhero comics and he’s cited Jack London as a major influence. And Gillen is no stranger to the X-Men world. He did have a great run on Uncanny X-Men not that long ago.

And it’d be a crime to not mention the awesome Adam Kubert handling the pencil duties on this one. His brother drew the first Origin in 2001, so there’s some sibling rivalry going on here, too. But really we’re just in for some killer art that’s sure to elevate the book to a higher level. The best part, though, is you really don’t have to have read Origin for this one to make sense. If you’re at all aware of who Wolverine is, then you should be able to jump right in with no worries. If Origin underwhelmed you, this one might just make up for that…maybe. 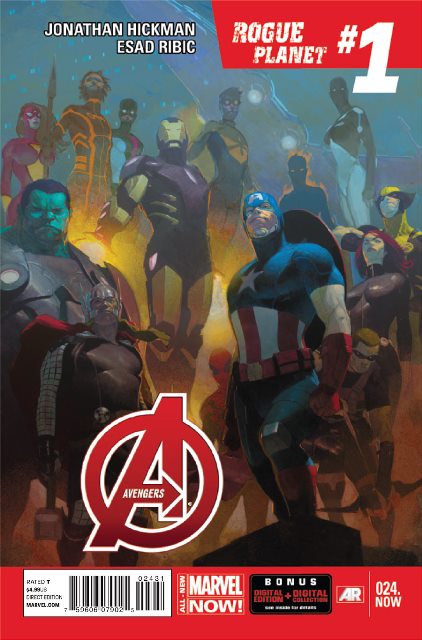 Avengers #24.NOW – Infinity is over, but the fallout will continue on for a long time. Jonathan Hickman has crafted one of the most epic Avengers stories ever and he’s not slowing down for a minute! This is the beginning of Marvel NOW! phase 2. The first part of Rogue Planet might not be the friendliest jumping on point, but Hickman isn’t known for making it easy on new readers, either. He’s one of those that likes real commitment from his readers, and usually gets it, too. Here, the Avengers are on the verge of expansion. We all know that Avengers World is about to launch and this is where the idea for it will be hatched. As the title suggests, there’s an actual rogue planet out there on a collision course with Earth and The Avengers are the ones who have to stop it. Of course, it’s not going to be that simple. There’s going to be way more to this or it wouldn’t be a Hickman story.

The art is being handled by Thor: God of Thunder artist Esad Ribic and, from the preview pages, is going to be at least on par with his work on that title. In other words, freakin’ awesome! His painted, yet kinetic style is going to make every scene leap off the page. That’s reason enough to at least give this first chapter a try. If you skipped the beginning of Marvel NOW! this might be a good time to try it out. If nothing else, some crazy things are bound to happen and you just might find yourself walking out of your local shop with a few trades and/or hardcovers, too.