The Rockets fly by Dwight, the Pelicans go for broke, Grit ‘N Grind finds a new coach, and the Spurs dust themselves off and try again

Since I already threw thousands of words out already about Dwight Howard leaving the Lakers at the altar, how can you not talk about how painfully close the San Antonio Spurs were at winning a fifth NBA Championship from the Heat? When Ray Allen tied the game with a scrambling three-pointer and pushed the NBA Finals to a seventh game, which Miami won at home, even the biggest Spurs hater had to feel just a little bit for what happened to the Western Conference Champions. Bill Simmons said it already: No team has ever come that close to winning an NBA title and not actually grabbed that brass ring. Think about how incredible that is. Instead, the ring went to LeBron James for as second time and the Spurs lost not only a ripe chance at the title but also their undefeated record in the Finals. Popovich himself, who has a mean poker face, admitted at media day that he still thinks about Game 6 at night.

As Miami’s celebration down Biscayne Boulevard closed down in July, the Western Conference general managers got the creative juices flowing to try to win back the NBA Championship after falling short two seasons in a row. We all know who had the biggest idea of the bunch, literally, as the Rockets got their guy in center Dwight Howard. But what happened to the rest of the Southwest Division this offseason? Well, this is what happened. 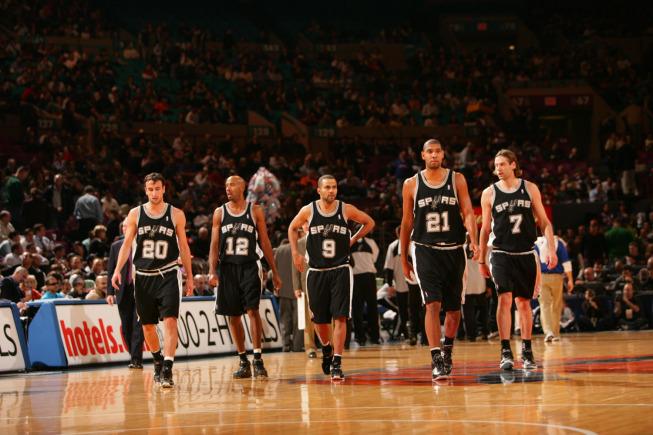 We already touched on the fateful scarlet letter that the Spurs will forever wear after blowing Game 6 of the NBA Finals and ultimately losing the series to the Heat. But a loss that valiant cannot fade into the night, and Spurs GM R.C. Buford refused to let it do so. He kept Splitter, who had some great moments at center for the Spurs before having a lackluster Finals, and Ginobili, who is still good but has really lost his best stuff. Ginobili’s contract extension was particularly flexible to the Spurs’ cap, so that’s a good thing. The one intrigue now is that we might have an official expiration date on their title run, which I mentioned back in June. That date is at the end of the 2014-15 season when Duncan and Ginobili’s contracts both expire, likely leading to joint retirement. Parker, who led France to a gold medal at EuroBasket this offseason, and Pop are set in San Antonio for years to come, but without Duncan, their title hopes definitely take a step back. Belinelli is a scrappy three-point shooter who showed a lot of toughness in Chicago and the only thing I remember about Ayres (formerly known as Jeff Pendergraph with the Pacers) was that he tried to fight Norris Cole and Flo Rida’s manager during garbage time of Game 7 of the Eastern Conference Finals. I hear he is a good shooter at center. Thomas and Jean-Charles, who is out with a knee injury, will both play overseas for the time being. The biggest blow may have been losing two key assistants as Mike Budenholzer now runs the Hawks and Brett Brown takes over for the Sixers. Jim Boylen was hired in the offseason.

PREDICTION: There are two more years of the Poppovich-Duncan-Parker-Ginobili era to look forward to, and this is the second to last dance. Losing Gary Neal will hurt their three-point shooting, but the Spurs way is to find a new role player and plug him in where Neal was. They’ll do it again. And Kawhi Leonard is only going to get better. I expect more of the same here (1st in Southwest Division, 1st in Conference) 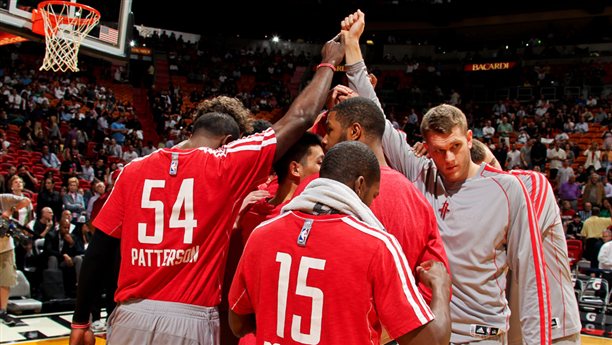 When I first wrote about Dwight signing with Houston, the jury was still out about how Daryl Morey was going to round out the rest of the Rockets roster to appease his new acquisition and James Harden. Instead of adding a third wheel like Josh Smith or Andre Iguodala, the Rockets are going to go with the two-man game and find good role players to finish off the team. Omer Asik originally demanded a trade after Dwight was signed, but that has cooled off since then. Brooks was brought back to back up Jeremy Lin, and Garcia impressed the Rockets in the playoffs. I liked Casspi when he came into the league, but he has gotten worse every year since then. Williams has been on awful Warriors and Bobcats teams, but he is a really good shooter and he can score in flurries. But look at all the three-point shooters! Harden, Chandler Parsons, Lin, Brooks, Garcia, Brewer, Williams, Canaan. Dwight won’t even have to turn his head to find an open man with the way the roster is looking right now. Small ball with a big guy as your centerpiece is not a revolutionary offense, but it is tough to practice against. I just wonder about the perimeter defense in the long run for Houston.

PREDICTION: Obviously, the Rockets will be better than eight games over .500, but the big question is by how much. I don’t see them overtaking the Spurs in that division right now. The Mavericks WON THE NBA TITLE in 2011 and did not win the division from the Spurs that year. I see at least 50 to 55 wins here, but the Rockets are not invincible by any means. (2nd in Southwest, 4th in Conference) 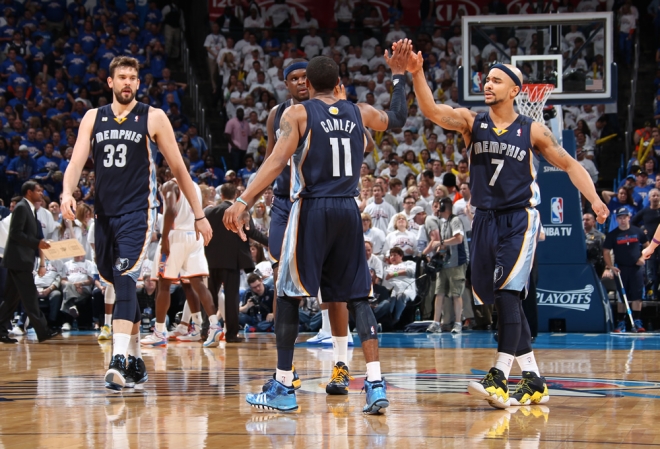 There is no doubt that the Grizzlies are excellent on defense and have a lot of talent to go with their slow ‘em up style. But sometimes I wonder if they got a little bit lucky this past season. They took out a Clippers team that was mentally fragile and played right into their hands, then got to dispatch a Thunder team without Russell Westbrook. The Spurs loss was a pretty humbling sweep to the point that Hollins, who wanted a richer deal, got the axe. The Grizzlies have never won a playoff GAME without Hollins coaching them, so Joerger has some big shoes to fill. They basically kept things the same outside of a swap involving Kuofos and Arthur. I consider that a push. Miller is back in Memphis, where he won Sixth Man of the Year back in 2006, and he can still play defense to go with the threes. Calathes was a good two-guard once upon a time at Florida. I liked Franklin in college. I think Crazy Tony, who re-signed with Memphis, is going to take him under his wing.

PREDICTION: Just like the roster, I expect more of the same with Joerger keeping with the Grit ‘N Grind play albeit with some slight adjustments. They need to vastly improve their outside shooting, and Miller and an improved Quincy Pondexter might be able to help. I don’t see a Western Conference Finals in the horizon, though. There will be some slippage. (3rd in Southwest, 7th in Conference)

The former Hornets not only brought a new name into the offseason with owner Tom Benson, they also brought in a “win now” attitude after Nerlens Noel fell into their laps in the NBA Draft. They used him as trade bait and sent him to Philadelphia in exchange for Holiday, who had an All-Star season and will be the de facto point guard. Step 2 came when they signed Evans from Sacramento as a restricted free agent, tying up a lot of their cap space in their guards to go with Rookie of the Year runner-up Anthony Davis. It looks risky, but Holiday (a true point guard) and Evans (a slashing two-guard) wanted to go there and if the backcourt with Eric Gordon somehow clicks, look out. There is already word that Monty Williams will bring Evans off the bench, so that will be a treat to see. Morrow is a great three-point shooter, Steimsma and Withey can block shots at center, and Aminu was well-liked in New Orleans. They might miss the inside presence of the other Lopez, but I was not super big on Vasquez anyways. He had bloated assist numbers on a terrible team. Austin Rivers has to get better, though, because he could not have played any worse in his rookie year last season.

PREDICTION: There is potential for disaster and there is potential for a 40 to 50-win season if things bounce right. I know, this is my local team and they finished second to last in the conference, and they will probably be battling Dallas to not finish last in this division, but I think this is going to work. My heart says playoffs, but my head says… fuck it, they’re going to make the playoffs! (4th in Southwest, 8th in Conference) 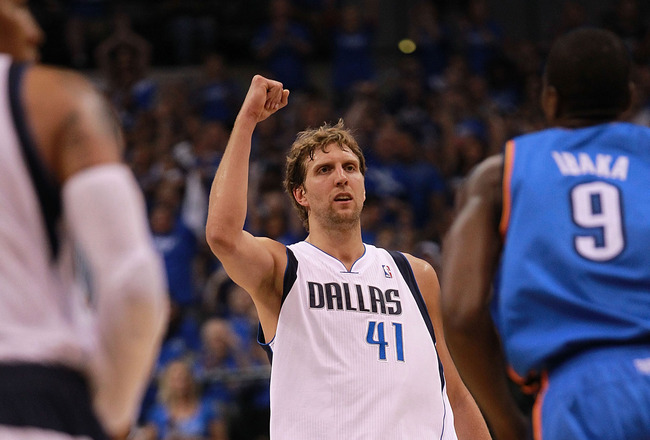 How tough is this division? A team that won an NBA title just two seasons ago might have to duke it out with the Pelicans to not finish last in the Southwest. To quote Bob Uecker in Major League, every dramatic pitch Mark Cuban sent to NBA superstars to try to team them up with Dirk Nowitzki in the last two years has been “juuuuuust a bit outside.” Deron Williams stayed with the Nets. Chris Paul stayed with the Clippers. Dwight Howard turned him down twice! Even Andrew Bynum, who was toxic as a free agent, went the other way on Cuban. Now, for the second year in a row, Cuban is avoiding the full-on rebuild by patching up the roster with good to solid players out of hopes of making a playoff run with interchangeable pieces for Dirk and Rick Carlisle. Bye, Mayo, Hello, Monta. Bye, Collison, Hello, Calderon and Harris. Morrow got replaced by Ellington, Brand got replaced by Blair, and Kaman got replaced by Dalembert.  Brandan Wright comes back and they picked up young guards in Mekel, Larkin (who broke his ankle after the draft), and Ledo, who some call a sleeper pick out of the second round. They tried dumping Shawn Marion’s contract, but no one bit. Fab Melo is still way behind on the learning curve, so hopefully he shows his size in Dallas, and Ebanks was a decent small forward for the Lakers.

PREDICTION: This reminds me a lot of what the Rockets did with Hakeem Olajuwon. The team refused to rebuild in order to please Hakeem, so after the ’86 Finals team fell apart, they stayed with it until they got back to the Finals and won back-to-back titles in ’94 and ‘95. After the Barkley/Drexler/Pippen experiment ended, with Hakeem reaching the end, they tried to bring in a mix of youngsters like Steve Francis and Cuttino Mobley to see if they could salvage something. Those teams always finished at or near .500, but never made the playoffs. I see that happening to the Mavericks. Dirk got his two runs at the Finals and made good the second time around. Now he is nearing the end, and Cuban is doing all he can to stay loyal to his guy. (5th in Southwest, 9th in Conference)