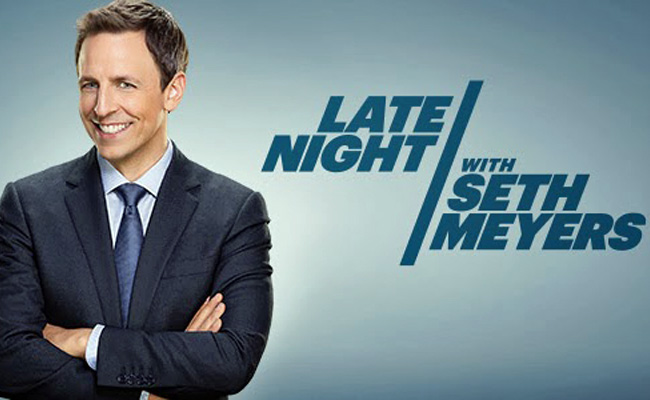 Come into my dorm room every night at 11 PM and you’ll see me watching Conan. Come in at 11:34 PM, The Tonight Show with Jimmy Fallon. After that, Late Night with Seth Meyers. If there is one thing I enjoy as much as movies, it’s late night television and its world of jokes, gags, skits, sketches, interviews. I have been watching Conan O’Brien since I was 14 years old, and I have followed him and his predecessors since. But one of my longest dreams was to view a taping live, and this past Monday, my dream came true.

I won’t disillusion you by claiming that Seth Meyers is my absolute favorite talk show host, but he is in my top 5. When I noticed a post on Facebook announcing the release of October tickets, I set 3 different alarms, and prepared myself. The time came, and I navigated the website as though I was competing in The Hunger Games. 2 minutes later, I had a ticket reservation. By happenstance, the date just happened to be Columbus Day so I didn’t have to miss any class. BONUS.

The weeks that followed were consumed with thoughts of “Will we get there on time?” “Who will his guests be?” Last week, several revelations came through various mediums. Firstly, we would miss seeing my favorite actor, Robert Downey Jr., by one taping. Bummer. Second, our guests would be Minnie Driver, Ike Barinholtz, and music from Florida Georgia Line. I knew two out of three. And third (most exciting) Seth’s Bandleader, the incomparable Fred Armisen, would be returning to the show during our taping after being away filming his show Portlandia since May. This was fabulous news.

Meticulous planning made for a fun filled day in New York City, but I’ll stay on topic. We arrived at NBC at 4PM when a man who sounded like the offspring of Tony Soprano gave us our explicit instructions on how we will be searched prior to entrance, what to do to ensure getting in, where precisely to wait, and a vehement demand to turn off our cell phones. Within the crowd I could hear several imitations of his accent. Whattaya gonna do?

After showing our reservations to the NBC page, we received wristbands and tickets marked with the letter “I” and we were instructed to meet outside a closed luggage store in Rockefeller Center at 5:15 PM. The pages were quite insistent that we not arrive early or late, and numerous attempts to sit in that location were greeted with lectures about the potential fire hazard. Tough, yet fair.

5:15 comes along, and we are sorted into a line between H and J ticket holders and escorted upstairs to wait behind the velvet rope. Approximately half an hour later, we are brought back downstairs to be searched via metal detector and then escorted in small groups to an elevator to the 9th floor. Following the hallway, my friends and I are enthralled by pictures from Saturday Night Live , and when the line comes to a stop outside Studio 8G, I look left through a foyer and it hits me with what exactly i’m seeing. 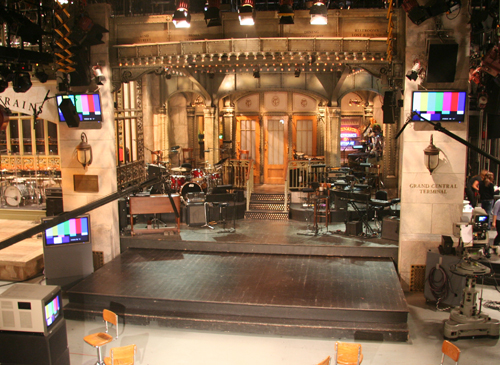 It’s the SNL stage where so many greats have stood since 1976 to deliver their monologue. It was a surreal sight to see, and I remember that not even two days prior, Bill Hader had been standing precisely where I am looking. I felt a tear in my eye knowing how many legends had brought joy to the world from that exact spot, and I felt an optimism that I would someday be in that studio myself.

Coming out of my SNL daze, the doors open and we are escorted into Studio 8G and placed in the third row. I looked at the various cameras, producers, assistants and the set up that was necessary to make this program happen every night. I try taking in the various technical processes I learned in my time at college so far, and I feel as though I’m understanding most of it.

About 6:20, the warm-up comic Ryan Reiss comes out, and gives us the various safety instructions and tells us not to yell out during the show. He also explains that it is important that we react to everything. He also greets us with incentivized t-shirts, tote bags and Starbucks gift cards for having useable reactions. Thus like the avid sports fan, I cheer as loudly as possible throughout the show. He then walks into the crowd and gets to know us. He heckles a gentleman for not being responsive, and upon learning that the man is from Colorado, he remarks “Oh I guess that means you’re just high.”

A couple minutes go by, and then he introduces Fred Armisen and the 8G Band, who enter the studio. Fred greets us, and explains that they will play a song just for the studio audience. They play a magnificent rendition of Billy Idol’s “Dancing with Myself” and I wonder how it is that Fred Armisen plays the track better than Billy Idol himself. Finally, Seth Meyers comes out, welcomes us, promises us a good show, and retreats behind the curtain.

6:30 comes along, and the show begins. It flows mainly the way you see it on television, but being there in person lends a higher sense of gravity to the situation. The technical process is like a well-oiled machine.

Seth begins a joke about conservatives and pornography, and one of my companions chants “woo” aloud during the set-up. Not to be taken off track, Seth improvisingly roasts him for being the sole responder. “Do you feel a little on an island now sir? Did you maybe think it would be a collective reaction to that news? Now you’re ‘oh just me.'” We laugh, Seth seamlessly resumes his monologue, and for creating a funny interaction, my companion is rewarded during the commercial break with a tote bag.

The show proceeds as normal, and we react accordingly to the jokes and performances. Seth has a hilarious back and forth with Fred Armisen about his time in Portland and a supposed “Cat Summer Camp” that he had opened. Whilst guest Ike Barinholtz tells a tale of himself and his wife wearing Game of Thrones costumes, another of my companions greets the show’s mention with a “YEAH!” and is rewarded by a pointing gesture from Mr. Barinholtz. These are minuscule moments to celebrities like these, but they meant the world to me and my friends, and will live on as lasting memories.

After the interviews are complete, Florida Georgia Line comes in to set up their equipment for their set. During this process, Seth himself comes into the audience and explains that a musical guest requires additional time to set-up, and he likes to spend this time inbetween talking to his audience and answering questions. As he comes up into the stands, I alone stand up and reach my hand out, and to my surprise, he looks me in the eyes, extends his, and shakes my hand and says “Thanks for coming.” At this point, my mind is out of my body. This is the same man who every night looks at the world through a television screen. This time however, he can see me looking back.

He fields a few questions prior, then sees my hand raised and he selects me. I look into his eyes once more, and I ask him about the Spider-Man comic book he co-wrote with friend Bill Hader, and whether he would ever do so again. I can’t recall his exact words, because I was in shock at actually conversing with the same man who sat behind SNL’s Weekend Update desk for eight years, and now holds the spot once held by David Letterman, Conan O’Brien, and Jimmy Fallon. But I quickly come back into my brain, and I hear his response. He tells the rest of the audience the title of the comic “Spider-Man: The Short Halloween” and a small bit of background info. He then explains to me that working with Bill on the comic was a great experience, but writing a comic book is more time consuming than writing a TV show, so while he would love to do so again, it would not be soon and it could take a while.

He answers several more questions from the crowd, including “What will you and Stefon name your children?” (a reference to last Saturday’s SNL) and he responds “Well I don’t know about child-ren. We’ll just see what happens with the first and if we keep it. We may name it after our favorite club: Kevin” He records a personal greeting to an audience member’s mother was unable to attend. He also fields a question from my companion. “Do you watch Game of Thrones?” Seth responds “Yes.” My friend follows up with “Who’s your favorite character?” Seth responds “Good question……Jaime Lannister.” My companion says “I can respect that.” Seth thanks him for his respect and continues to field questions from the crowd until it is time for Florida Georgia Line to perform,

They perform their song, and the ending is filmed. However, we are told that the band will also perform one more song for the studio audience and online viewers. Finally, the show comes to an end. As me and my three friends begin to exit, a producer calls up and says “Hey you four! Come here.” We are rewarded for our responsiveness during the show with a Starbucks Gift Card.

As I mentioned, these are small events in the lives of these people, but for us, they are memories that will last forever. Not only did I get to actually interact with one of my heroes, I got a behind the scenes look into the profession I hope to someday find myself working in. We saw what the television audience doesn’t get to see including the bumper promos being filmed, the interactions during commercial breaks, and the tireless efforts that go into making this show happen so smoothly. No matter what happens, I will never forget my experience of this day.