One thing we at Place to Be Nation like to celebrate is the subjectivity inherent in entertainment — be it in wrestling, comics, music, television or, indeed, film. With that in mind, ten members of the PTBN staff will be picking the movies of the PTB generation. In this series, panel members will collect their five favorite films of each year, beginning with the year in which the oldest writer was born — 1976. The only rule given to each contributor was to provide his or her own criteria. Some writers may go with the most artistic films, while others might side with the most iconic blockbusters. We welcome your lists on Facebook and Twitter. Each staff member has submitted a list of five movies from 1994 ranked 1 through 5. A first-place vote is worth five points, a second-place vote worth four points, and so on. Using that point system, we have identified the top 5 movies of 1994.

1994 featured a fairly big upset, as the movie that ranks No. 1 on the IMDB Top 250 failed to crack our top 5. Instead, the top 5 consisted of a classic indie comedy, an unbelievably fun action movie, perhaps the best known efforts from both Disney and Quentin Tarantino and one of Tom Hanks’ best performances. But before we reveal the top 5, let’s see the movies that received votes, but fell short of making our final list.

Four Weddings and a Funeral — 3 points 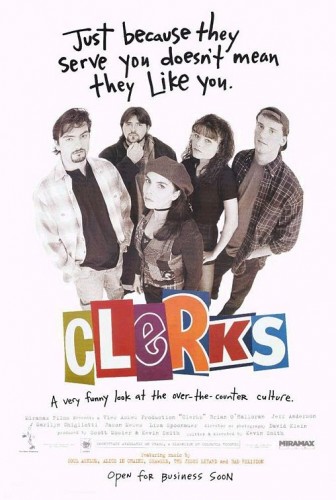 Nick Duke: I’m not usually the biggest fan of independent films, largely because I find them to be pretentious and not nearly as smart as they think they are, But, in the case of Clerks, we have an indie film that’s much smarter than it’s given credit for. Sure, the acting isn’t exactly amazing in most instances and the cinematography will never be accused of being innovative, but what the movie does better than almost any other I’ve ever seen is capture that certain malaise we’ve all been through at times in our lives. That feeling where we’re not really content with our lives, yet we’re too damned lazy to do anything about it.

What enables Clerks to shine is unquestionably the script by director and writer Kevin Smith. Drawn from many of his own experiences as a convenience store clerk, Clerks offers some of the most realistic dialogue I’ve encountered. There are lots of movies I love, yet none speak my language quite the way that Clerks does. And while I said the acting is spotty at times, the script couldn’t come to life without at least a couple of great performances. Brian O’Halloran as Dante Hicks is a bit whiny and unlikable, but I think we all have more Dante in us than we’d like to admit. The yang to Dante’s yin, however, is Jeff Anderson’s Randal Graves, who I think we don’t have nearly enough in us. Randal is one of my favorite film characters in history, and one I can relate to one whole hell of a lot, especially after the character development Smith brought to Randal in Clerks II.

But we’re not talking about Clerks II, we’re talking about the original. For its dialogue, its endless supply of quotable scenes (37!?!) (I’m not even supposed to be here today…) (Salsa shark.) (Ok, I’ll stop now.) and the inspirational true story of how the film got made and sky rocketed Smith from clerk to cash cow, Clerks is my favorite movie of 1994. Suck it, Shawshank. 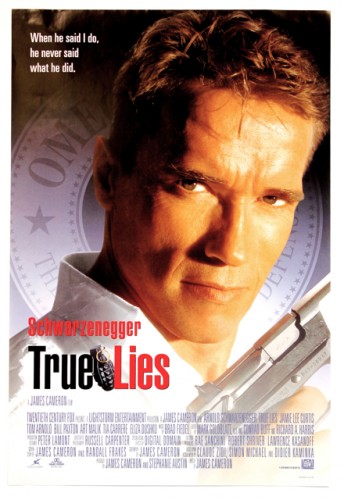 12 points, ranked by 5 of 10 voters, highest ranked by Aaron George, Greg Phillips and Andrew Woltman at No. 3

Greg Phillips: Scorsese and De Niro. Ford and Wayne. Ramis and Murray. Some director-actor tandems are magic. Such is the case with James Cameron and Arnold Schwarzenegger. The Terminator was a great action-thriller with plenty of horror elements in it. Terminator 2 amped up the action and shifted the focus to the thrills rather than the chills. And then came True Lies, a film that stuck its tongue in its cheek and went about poking fun at the very tropes both men employed in their previous films.

Simply put, True Lies is 141 minutes of pure, unadulterated fun. Everything just works — Cameron’s flawless pacing, Arnie’s charm and comedic timing, Jamie Lee Curtis’ steady (and sexy) character development, and Tom Arnold’s hilarious antics (along with his brief role in Austin Powers, this is Tom at his best). The movie walks a delicate tightrope — it never takes itself seriously, yet it is committed to is plot and its characters. It’s a comedy with more subtlety than virtually anything coming out today, and it’s an action movie with more power than virtually anything coming out today. In addition to the one-liners, the explosions, the striptease and the butt kicking, it also stands out because of Cameron’s understanding of the basic qualities that make action films work — strongly written heroes, unlikable villains, believable effects andenough consistencies to create a suspension of disbelief. 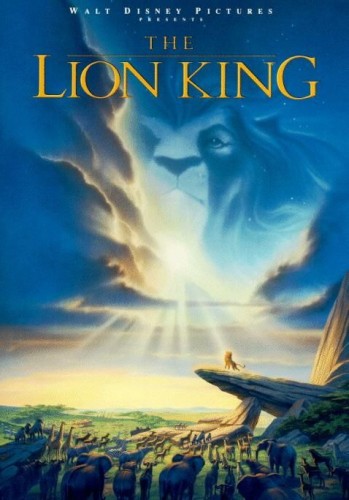 Kati Price: The Lion King is yet another Disney Classic to make our top 5. Until Finding Nemo in 2003, The Lion King was the highest grossing animated film of all time. I feel like this film is liked by so many because it is not a princess movie. The main character is male and it is not centrally a love story. This film is said to have taken inspiration from the biblical stories of Joseph and Moses, as well as the Shakespearean story of Hamlet. It is one of the few original stories; many of Disney’s stories are derived from existing fairy tales.

The Lion King takes place in Africa and many of the landmarks are inspired by actual places in Africa. The story follows a young lion cub names Simba from birth to adulthood. In The Lion King we are taught the life lesson of the circle of life. Simba’s dad, Mufasa, tells him about death and how it is part of the circle of life shortly before he is killed by his brother, Scar. Scar convinces Simba it is his fault, so he runs away. Scar takes over the pride while Simba spends years with a warthog named Pumbaa and a meerkat named Timon. When Simba comes across his childhood friend Nala, she tells him how Scar has ruined the pride and convinces him to come back and take his rightful place as King.

This movie is so awesome. It has a humorous script and an amazing cast. With stars like James Earl Jones, Whoopi Goldberg, Jeremy Irons, Matthew Broderick, Nathan Lane and Rowan Atkinson, the voice work is stellar. This cast really made this film. But we can’t forget about the music. All of the music was written by the great Elton John and Tim Rice. The music and story are so brilliant, it has been turned into a Broadway production. With one scene taking 3 years to animate, we can’t forget how amazing the animation was.

The Lion King is currently in the Disney vault so if you haven’t seen it, you’ll have to wait a bit. If you have seen it, you have likely seen it multiple times. I know I have. I love this film. It is one of the greatest Disney films and it deserves its place on our list. 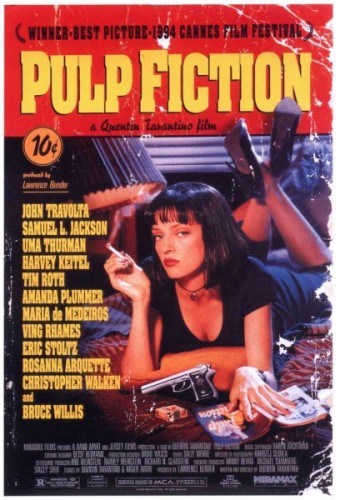 25 points, ranked by 7 of 10 voters, highest ranked by Anthony Estrada, Steve Wille and Andrew Woltman at No. 1

Andrew Woltman: As I previously said, Quentin Tarantino is one of the most influential directors of all time. If Reservoir Dogs was a masterpiece, Pulp Fiction was solid gold (or whatever you happen to think was in the briefcase.)

The non linear theme that he tinkered with in his last endeavor is modified even further to show us what amounts to a jigsaw puzzle. We receive dark humor, excessive violence, and complete personalities thrown into our characters. It’s a complete bag where everything is fully engaging and fun with moments that sparkle. Samuel L. Jackson’s chilling performance, Bruce Willis and Ving Rhames going at it, John Travolta dancing with Uma Thurman.

When you see it the first time, you will not know what to expect, and you will enjoy every turn. It’s funny, daring, and engaging. You will love every minute. 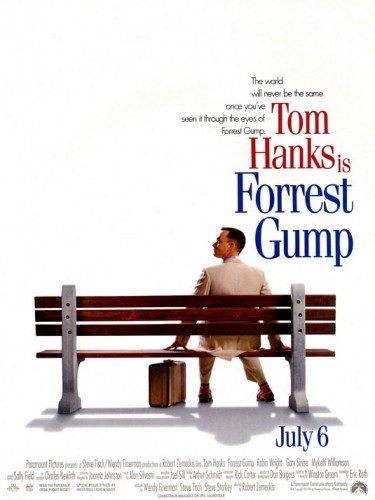 31 points, ranked by 7 of 10 voters, highest ranked by Aaron George, Greg Phillips and Andrew Riche at No. 1

Andrew Riche: At the Academy Awards in 1995, Tom Hanks set quite the milestone. He won his second consecutive Oscar for Best Actor, the first time that had happened since Spencer Tracy did it way back in 1937 and ’38. The first gold statue was as a man suffering from AIDS in Philadelphia, a transformational performance. But unbelievably, Hanks topped him for the next performance that struck gold, and that was as the incorruptible but not so smart Forrest Gump. Gump grows up as a disadvantaged Southern kid with a heart of gold raised in Greenbow, AL, by his loving and protective mother, played by Sally Field.

Although he is mentally challenged, the challenges of life hold no water to the determination and sweet-natured outlook that Gump refuses to let go even as he grows to be a man. We watch Gump, like the feather in the film’s opening scene, float through the chronicles of American history and never seem to lose his own footing while everyone else around him fall to prosperity, mourning, betrayal, rebellion, regret, and many other emotions that the country suffered through from the 1950’s to the 1980’s. Gump relentlessly runs like the wind through everything put in front of him while making the world just a little bit brighter along the way, all in the pursuit of winning over his childhood sweetheart Jenny, played by the Princess Bride herself, Robin Wright.

There are so many things to love about this movie, which won six Academy Awards including Best Picture. Director Robert Zemeckis and screenwriter Eric Roth both went home with trophies for their contributions, and while Zemeckis has made a littany of great movies from Back to the Future to Cast Away to Romancing the Stone, Forrest Gump, to me, is still by far his greatest directorial achievement. The visual effects from Industrial Light & Magic that seamlessly place Forrest in several historical clips were revolutionary and also won an Oscar. The soundtrack is loaded with classic songs through the decades and Alan Silvestri’s musical score is masterfully crafted.

But what still resounds with me the most are the performances, starting with obviously Hanks’ tour de force as Forrest himself. Wright plays Jenny perfectly as a sweet hometown girl who doesn’t overcome her own vices and insecurities to commit to Forrest until it is too late. Field is her awesome nurturing self as Mama Gump and I still think Gary Sinise should have won Best Supporting Actor for his role as Liutenant Dan, a lost, miserable soldier crippled in Vietnam that Forrest saves and befriends on the homeland. The story is quite epic in terms of passage of time, but like Forrest running through the fields of Alabama, the story motors right through without a single lull of boredom. The lines are classic and the film has a perfect balance of humor (“Sorry to break up your Black Panther party”) and somberness (Forrest saying goodbye to Mama and Jenny). The most memorable line in the film is Forrest reiterating one of Mama’s last words when he says at the bus stop, “Life is like a box of chocolates, you never know what you’re gonna get.” Maybe, but we know exactly what we got when I watch Forrest Gump: We got a cinematic masterpiece.