One thing we at Place to Be Nation like to celebrate is the subjectivity inherent in entertainment — be it in wrestling, comics, music, television or, indeed, film. With that in mind, ten members of the PTBN staff will be picking the movies of the PTB generation. In this series, panel members will collect their five favorite films of each year, beginning with the year in which the oldest writer was born — 1976. The only rule given to each contributor was to provide his or her own criteria. Some writers may go with the most artistic films, while others might side with the most iconic blockbusters. We welcome your lists on Facebook and Twitter. Each staff member has submitted a list of five movies from 1988 ranked 1 through 5. A first-place vote is worth five points, a second-place vote worth four points, and so on. Using that point system, we have identified the top 5 movies of 1988.

1988 brought the panel back together after a few years of division, as this year saw the release of what many consider to be the best action movie ever made. But before we reveal the top 5, let’s see the movies that received votes, but fell short of making our final list.

The Naked Gun: From the Files of Police Squad! — 12 points

The Land Before Time — 2 points 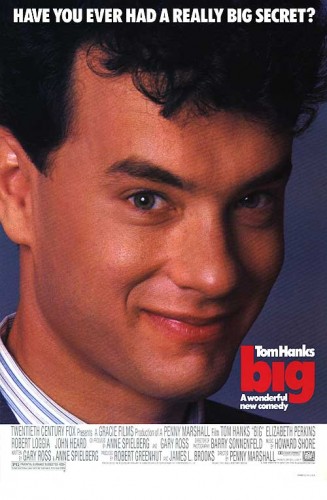 15 points, ranked by 6 of 10 voters, highest ranked by Russell Sellers, Steve Wille and Andrew Woltman at No. 2

Russell Sellers: Everyone knows Tom Hanks’ Oscar-winning roles. Philadelphia, Forrest Gump … both really good films. But in 1988 he wasn’t exactly known as the greatest actor. He had largely done goofball and dark comedies, but that all changed when he landed the lead in this fantasy/drama from director Penny Marshall.

Every kid at some point in their lives wishes they were a grownup. For this one kid, Josh, it actually happens one night after he makes a wish on a mysterious machine at a carnival. The morning he wakes up to find himself taller and with hair in funny places quickly turns into one of the most dramatically intense and heartbreaking moments of the film as he’s chased out of the house by his own mother who mistakes him for a burglar/rapist/kidnapper. Even his best friend takes some convincing, but from there it becomes a movie that shows the dangers of wishing your life away, but also shows that sometimes adults really do forget what it’s like to be young.

Josh’s adventures in New York City take him, unexpectedly, to the top of one of the top toy manufacturing companies in the world as his kid sensibilities are a natural fit. Hanks brings his A-game to the role making you believe that he really is a 12-year-old trapped in a 30-year-old body. A great supporting cast, especially Elizabeth Perkins and Robert Loggia, help to emphasize those moments when Josh both loves and regrets his wish.

This is one of the best coming-of-age films ever made and is a perfect example of Tom Hanks’ abilities as an actor. And if nothing else illustrates just how well thought out the movie is, the toy store scene alone is worth watching the whole movie for. And the ending will grab those heartstrings and make you long for home. Every. Single. Time. 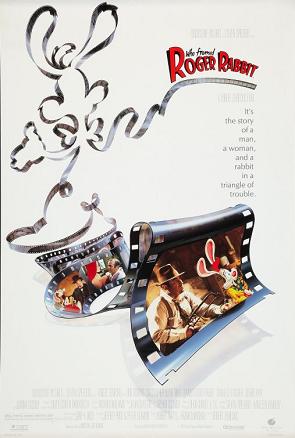 Kati Price: Who Framed Roger Rabbit? is a animated/live action crossover, comedy that follows Roger Rabbit who thinks his wife, Jessica Rabbit, is cheating on him. He seeks the help of private detective, Eddie Valient, portrayed by the late Bob Hoskins.

Along the way, Judge Doom (Christopher Lloyd) tries to get rid of the beloved Roger Rabbit. Along the way you will see many notable cartoon characters that have crossed into the human world. In a good way, this is just a silly little movie with some brilliant acting alongside some even better voice work. Roger Rabbit has such an iconic voice! I grew up watching this film and have always enjoyed it. This is a classic for all ages. 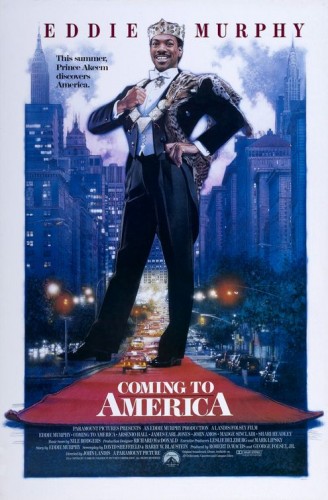 18 points, ranked by 4 of 10 voters, highest ranked by Nick Duke and Anthony Estrada at No. 1

Anthony Estrada: What’s your feel good movie? The one that, no matter how many times you’ve seen it, you’ll stop what you’re doing to watch it, at least for a few scenes. For me, Coming to America is one of those movies. It’s a time capsule, distinctly 1980’s, capturing a world where the Mets ruled New York, douches rocked jheri curls rather than faux-hawks, and Eddie Murphy was royalty.

Make no mistake about it – this was prime Murphy. The Nutty Professor gets noted for displaying Murphy’s versatility but he’s never better than here, portraying four distinctly different characters with unique comic flavors. There’s Randy Watson, flamboyant frontman for the band Sexual Chocolate, who performs the best bad cover of “Greatest Love of All” you ever heard. Clarence, the beleaguered barber, spends his days arguing with the other old timers in the barber shop about race, sports and whatever else comes up. Their dialogue is like jazz – freestyle riffing, each taking turns playing off the others. One of those old timers is Saul, an ancient white man who seems to communicate exclusively in shouting bursts only tenuously related to the conversation everyone else is having. He reminds me of my grandfather in a way that makes me smile.

Finally there’s Akeem, African prince and hero of the film. In many movies, we identify a character as a prince because he’s wealthy and sheltered. Here, Murphy infuses Akeem with this presence that makes him stand out, even while picking up trash in a McDowell’s uniform. Akeem has integrity. He’s decent to the core and we root hard for him to succeed in his mission of finding his queen. Eventually he meets Lisa, and the chemistry they share feels as genuine as most anything you’d find in a more conventional romantic comedy.

By the end of the film, Murphy has covered an astounding amount of ground. The guy’s a genius and this may be his most underrated work. I wish it were on right now. 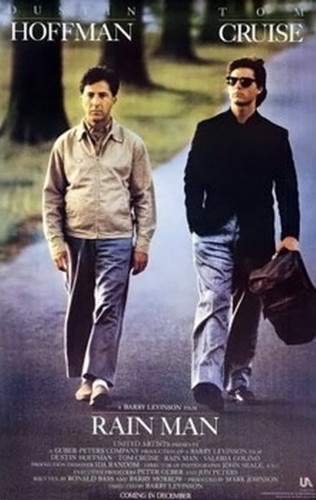 Andrew Riche: As a person who has an older brother and a younger brother (along with a younger sister) in my family, I felt a more personal connection to the 1988 movie Rain Man than many others probably did. Rain Man tells the story of a Charlie Babbitt, a struggling con man whose father suddenly passes away. Charlie gets the Roadmaster in the will, but he comes to find out that the other $3 million goes to Raymond Babbitt, Charlie’s older brother whom he didn’t remember. Raymond turns out to be an autistic patient at a mental institution, from which Charlie takes him away as a ploy to get some share of the family money.

While Charlie never gets any share of the inheritance or custody and Raymond eventually is ordered by the court to return to the institution, Charlie finds resolve and a deep understanding of his older brother (whom he used to call “Rain Man” as a child) on their cross-country road trip. The scenes between Tom Cruise, playing his most dramatic role to date at that time as Charlie, and Dustin Hoffman, who won an Oscar for Best Actor as the autistic savant Raymond, are borderline magical in their balance of humor, awkwardness, and battlement. This was only Hoffman’s third movie in the 1980’s after Tootsie and the disastrous Ishtar before going to Broadway to play Willy Loman in Death of a Salesman, and he surely made the right choice in playing Raymond. Not only did the film win Best Picture and Best Director for Barry Levinson, but it also grossed over $170 million in the box office, a certified cash cow for an R-rated dramedy.

Cruise was robbed of a Best Supporting Actor nomination by the Academy, but many still think this was one of his best performance alongside what can only be described as a tour de force by the veteran Hoffman. Raymond’s autistic behavior has been aped for years among casual conversation let alone movie ones because of how convincing it was. There are so many scenes that I can pick from that I love, from Charlie’s girlfriend dancing with Raymond in the elevator to Raymond’s counting of the toothpicks at a diner while babbling about underwear at K-Mart. But the scene that has always touched me the most was the final one (which had no script due to a Writer’s Strike during filming) in which Charlie has to say goodbye to Raymond at the train station. Charlie went into their relationship only for monetary value, but what he wound up getting out of it was the only thing he ever really needed in his life: A brother who loves him back.

Greg Phillips: Hot off the heels of Predator, action director John McTiernan amped things up the next year with one of the most influential films of all time: Die Hard.

At one time pitched as a sequel to the 1985 Arnold Schwarzenegger action romp Commando, the film instead morphed into a very different kind of action film, with a very different star to carry the load. Where Arnold was like a real-life superhero, Bruce Willis was an everyman. Where Arnold always rushed in to save the day with few problems along the way, Willis seemed like he could fall into depression and alcoholism at any moment. Their one similarity, of course, was a quick wit and confident delivery of classic one-liners.

Though some films, such as 1987’s Lethal Weapon, had already presented flawed, unstable protagonists, Die Hard was among the first to fully embrace its hero’s vulnerability. Willis, as John McClane, gets the daylights beaten out of him for much of the movie. His cuts and bruises don’t heal as quickly as those of Arnold’s characters, and when he is placed in danger, there’s a real fear that he might lose.

Like all great action films, it wouldn’t work without a great villain, and the incomparable Alan Rickman stepped up to the plate and crafted an all-timer with Hans Gruber. Every line Gruber speaks in the film is laced with arrogance and danger. And, in one of the film’s highlights, he uses a faux American accent to attempt to trick McClane into trusting him. The scene is brilliant, as the viewers implore McClane not to fall for Gruber’s deception. And, in a refreshing change of pace, Die Hard‘s main hero isn’t naïve, so he sees right through the façade.

Ultimately, though, if there’s one scene that displays Die Hard‘s importance, it’s the iconic shot of McClane walking across broken glass. Where Sly or Arnie might dance a two-step with no problem on the shattered glass, Willis gasps and frets his way through it, establishing just how much pain McClane must endure to escape.

It also stands as one of the great Christmas films ever, so there’s that, too.