One thing we at Place to Be Nation like to celebrate is the subjectivity inherent in entertainment — be it in wrestling, comics, music, television or, indeed, film. With that in mind, ten members of the PTBN staff will be picking the movies of the PTB generation. In this series, panel members will collect their five favorite films of each year, beginning with the year in which the oldest writer was born — 1976. The only rule given to each contributor was to provide his or her own criteria. Some writers may go with the most artistic films, while others might side with the most iconic blockbusters. We welcome your lists on Facebook and Twitter. Each staff member has submitted a list of five movies from 1987 ranked 1 through 5. A first-place vote is worth five points, a second-place vote worth four points, and so on. Using that point system, we have identified the top 5 movies of 1987.

1987 continued to see the panel deeply divided, as 9 different films received No. 1 votes and no movie received more than 20 total points. But before we reveal the top 5, let’s see the movies that received votes, but fell short of making our final list.

Some Kind of Wonderful — 5 points

The Pick Up Artist — 3 points

Harry and the Hendersons — 2 points

Three Men and a Baby — 1 point 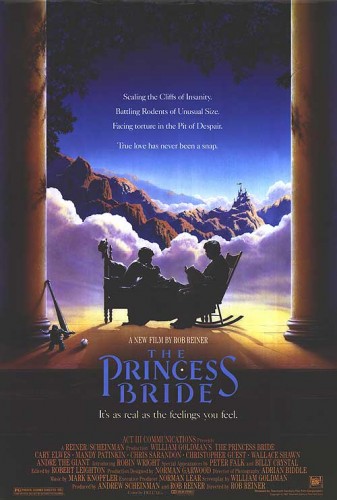 Kati Price:  I love how this film has a little bit of everything. It’s a love story but it is also packed with action and comedy. I grew up watching this film but it seems that it has recently risen in popularity again. And it’s no wonder why. This film has amazing acting, great writing and truly has something for all movie lovers. I love all of the actors in this. Perhaps my favorite is Mandy Patinkin. He was given the opportunity to portray any character and he chose excellently! Using his father’s recent passing to fuel his character, Patinkin gave a stellar performance.

Robin Wright, likely more notable for her role as Jenny in Forrest Gump, also did very well as a fairly new actress. There hasn’t been a movie Cary Elwes has been in that I didn’t like him in. And for wrestling fans we see Andre the Giant in a somewhat comedic roll along side Wallace Shawn. Of course this movie is a story within a story so we can’t forget a young Fred Savage and Peter Faulk who portray a sick grandson and his story reading grandfather, respectively.

I don’t have any criticism of this movie, really. The Princess Bride has become a cult classic, so it’s likely you’ve watched it, but if not, I implore you to do so. Like I said, it has something for everyone and I think you will enjoy it. It’s a very fun and quotable film, which is why I voted for it. 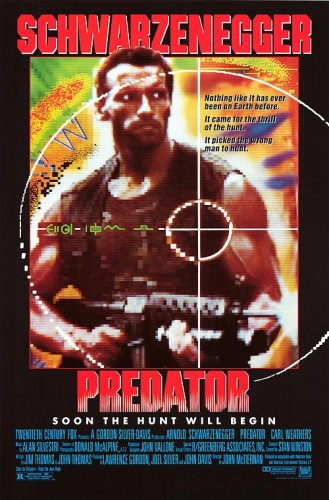 Russell Sellers: As action films go, this one is essential. By 1987 most everyone knew who Arnold Schwarzenegger was, but the real breakout star of this film was director John McTiernan. His slow-build style along with a heavy focus on character development rather than just cutting to the next explosion earned him a reputation as the go-to action director, especially when he followed this up with Die Hard the next year.

But this wasn’t just good action, it was classic sci-fi. The story of a Special Forces platoon being taken out one-by-one by an unseen enemy who is apparently skinning them and keeping skulls as trophies was as chilling as it was fun. Like Alien before it, the story centers on a single protagonist (Dutch, played by Arnold) surrounded by almost obvious cannon fodder. However, thanks to some expert writing and directing, you actually start to care about some of these characters. It’s hard not to get a little misty-eyed when Mack mourns the loss of his buddy or to root for Dillon to “get even.” And when Billy prepares to stand toe-to-toe with the beast, you wish you could be right there with him even though he doesn’t stand a chance. And who doesn’t want to wield “old painless?” Unlike Alien (but more like Aliens), this one goes for the throat in the action, even if it does seem to take forever getting to it.

There are all sorts of intricate subplots running throughout this one and it serves to invest you in the characters, even if none of them really make much difference in the end. Once the team starts to realize what they’re dealing with, the movie makes a strong point about petty squabbles being utterly pointless in the face of real danger. And not to mention the outstanding visual effects and well-timed action set pieces. It’s awesomeness has been known to put a song in my heart, and I don’t just mean Little Richard’s epic Long Tall Sally. 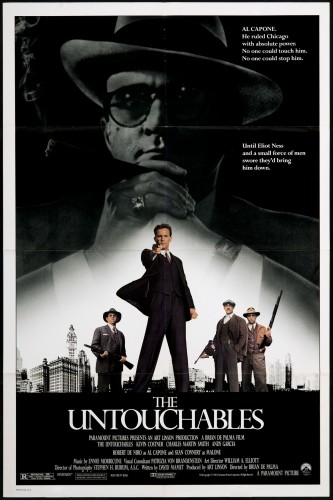 16 points, ranked by 4 of 10 voters, highest ranked by Andrew Riche and Russell Sellers at No. 1

Andrew Riche: Brian De Palma has had a long and storied career as a movie director, and his resume was already pretty stacked before the year 1987. But regardless of what he made before or after that year, I have always felt like his best movie was The Untouchables, an adaptation of the real life memoir by Eliot Ness. Ness was a government agent during the Prohibition era assigned to take down Chicago mob boss Al Capone. The struggle is more than fortuitous as Ness can only rely on three other agents or law enforcement officers in Chi-town not alreadybought out by Capone’s money or influenced by his violent power. The race is on between Ness’ “untouchable” but small crew and the rest of Capone’s cronies on both sides of the law to find him guilty of tax evasion in court.

Although Ness never winds up falling under the influence of Capone’s seedy resources, the film’s greatness was influenced by a variety of sources, namely De Palma’s signature stylishness. His camera shots and knack for suspense are perfect in making a movie set in the 1930’s feel like a modern thriller. The shootout at the train station to the backdrop of a tumbling baby carriage originally meant as a tribute to the silent film The Battleship Potemkin has lived on as one of the greatest sequences in cinema history. The script was written by David Mamet, who just just recently won the Pulitzer Prize for his play Glengarry Glen Ross. Mamet’s own style of rapidly short dialogue and bare bones realism was a perfect mix for the exotic beauty of De Palma’s camera work. Add to it the excellent musical composition from Ennio Morricone (Seriously, listen to the film’s signature theme) and try not to get lost in its majesty), and you have yourself a dandy of a story.

All of those factors don’t even involve the performances from the actors, which are equally great. Robert De Niro really sinks his teeth as a villain as the cocky but unforgiving Al Capone. Ness is played perfectly by an up-and-coming Kevin Costner, with the relentlessness of a grizzled cop but a heart of gold. Ness’ mentor is the Irish-American cop Jimmy Malone, played by Sean Connery in only the way that Connery could do it. Connery won an Oscar for Best Supporting Actor (the film’s only Academy Award), but he was still one part of many that made The Untouchables such an unforgettable piece of work. Let’s face it: Comparing any ordinary mobster movie to The Untouchables would be like bringing a knife to a gun fight. 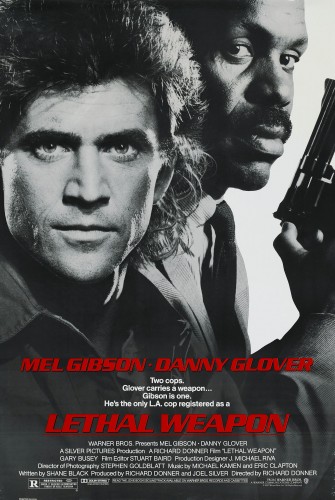 Steve Wille: To me, the buddy-cop genre is a tired-out, well-worn genus that, outside of some cult television shows of the 1970s, rarely produces quality entertainment. The Lethal Weapon series (well, at least the first three) exists on its own plane, reinventing the genre. Richard Donner, director of previous PTBN Generation picks Superman and The Goonies, enters a new realm, depicting Mel Gibson and dramatic actor Danny Glover as, you guessed it, two police officers with completely different personalities. Gibson’s nutty, irreverent and, essentially, suicidal, while Glover portrays a seasoned, somewhat grizzled, veteran who is, infamously, “too old for this shit.”

It shouldn’t work, and yet, not only does it succeed, it triumphs. The film perfectly meshes action scenes (accurately depicted, but never grotesque) with witty, memorable dialogue and a touch of slapstick humor. Donner sneaks in some family dynamics into the mix of shootouts and chases (Glover’s daughter has a thing for Gibson? Awww!) but never loses sight of the frenetic, yet coherent pace. You leave the film feeling like this is a franchise, and three more adventures come over the next eleven years. None match the quality and sheer amusement associated with this genre-breaker.

Glenn Butler:  Alex Murphy is a Detroit cop. That’s relatable enough to a modern movie-goer. Alex Murphy is a cop in a dystopian nightmare vision of Detroit, where monied interests have explicitly taken over government services while the untermenschen fight for their scraps. (Insert the obvious joke about modern Detroit.) For this, Murphy is gruesomely killed by a bunch of thugs, and the tattered remains of his flesh are wedded to cybernetic components to form RoboCop, a new hero for our generation.

This does not say a lot of great things about our generation. Murphy has had his physical, literal humanity stripped from him — he’s encased in his cyborg suit, he carries his gun inside his thigh, and his actions are constrained by directives programmed into him. While he regains some small amount of his physical humanity during the movie, discarding the upper part of his mask to reveal his whole face, Murphy is mostly left to struggle for his humanity in a metaphorical, emotional way. He has to struggle for his soul, if you believe in that sort of thing. Peter Weller, as the star of the movie, has to get a lot of this across even while the premise restricts his acting to a dull monotone and a narrow range of facial expressions, but he more than makes it work, he makes Murphy’s plight feel real.

The movie was directed and otherwise shaped by the enigmatic Paul Verhoeven, whose movies, as Roger Ebert said in his RoboCop review, “are not easily categorized.” RoboCop has a dash of a police thriller, it incorporates obvious sci-fi elements, the ultraviolence of its action scenes really put the gore in phantasmagoria, and it’s one of the best examples of what we’d later recognize as Verhoeven’s trademark combination of black humor and social commentary, commentary which is as biting as it is unsubtle. All of those elements were combined with a classic score by the late, great Basil Poledouris, as well as the trademark quotable lines of many of our favorite 80’s films — “Your move, creep.” “Somewhere there is a crime happening.” “I’ll buy that for a dollar!” — to form something that’s stuck with us through diminishing returns in sequels, TV series, and reboots.