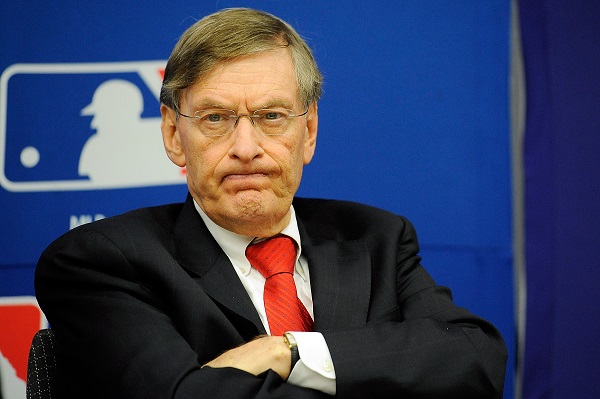 With the recent decision by Major League Baseball to ask Apple to remove a significant number of team-related baseball podcasts, MLB has not only angered a great deal of fans over an insignificant concern, it has shown that the sport continues to take two steps back for each step forward with its fans.

After showing a remarkable (and uncharacteristic) ability to react in-season to the harsh criticisms of the transfer rule, MLB also garnered a lot of praise for its adoption and use of in-game, large-scale instant replay, with umpires and on-field personnel getting along at seemingly unprecedented levels. And the calls that are getting overturned are, mostly, the right calls! The game, it seems, just handle positive press. I can see it now.

Executive #1: Isn’t this great? Replay is working out, we fixed that silly transfer rule, and our game is swimming in money! It’s just fantastic!

Executive #2: You’re right! We haven’t screwed up in quite a while.

Executive #1: Yeah. We’d better do something about that.

Executive #2: *glances at his secretary’s computer, which has iTunes open, wickedly grins* I have an idea…

I mean, that has to be what happened, right?

The action taken by MLB has angered a great many fans, many of whom love nothing more than to talk baseball winter, spring, fall, rain, shine, whatever. Podcasts are a fan-driven enterprise. They are, essentially, free public relations for the sport. Podcasting, as any number of the PTB staff can attest, is a labor of love. The hosts and guests do not do it simply to hear themselves talk. They do it because they love their subject and wish to share what they enjoy and their opinions with others. To connect, to reach out, and to find like-minded fans and friends from all over the world.

MLB’s actions here seem to be founded on a very petty argument, which is essentially this: the podcasts in question use team logos (or slight variations thereof) to advertise their shows. Someone in the MLB power structure determined all of the free publicity and marketing and *ahem* ENJOYMENT was not properly licensed, so they pulled all of these shows.

MLB has apparently passed the buck to Apple, saying it was a mistake, and Apple was merely supposed to remove the copyright-offending logos, but not the actual podcasts themselves. While Apple has yet to comment on the matter as of this writing, it certainly sounds like a case of MLB attempting to pull its foot out of its mouth, and swiftly kick Apple in the ass.

Many podcast producers and listeners are finding alternate ways to listen, which is fantastic, Personally, I gave up on podcasting through iTunes about a year ago, and can still listen to all my favorites with no concern.

But, unlike the petty, insecure bullies at school that mama told you to “just ignore and they’ll go away,” this is not an issue that requires ignorance. Rather, we, as the audience — and producers — of so many excellent podcasts, need to make our voices heard.

Let Apple and MLB know that these podcasts matter. These voices matter, and the sport’s attitude toward its most loyal, devoted fanbases matters too.