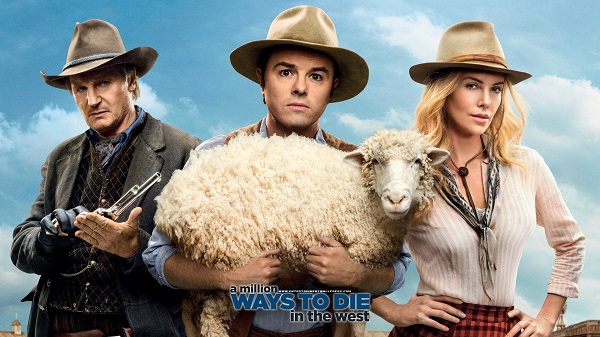 I am not a tough man. I floss regularly and mumble “Sorry” when I bump into people. My wife and I buy a lot of things with cats on them. And that’s okay. The times we live in don’t require toughness, at least not in the traditional sense. The Wild West, on the other hand, is a whole different story.

And that’s the premise behind Seth Macfarlane’s A Million Ways to Die in the West. How would a man of today – soft hands, self deprecating humor and gentle demeanor – fare in the rough and tumble 19th century West? Now, to be fair, this description doesn’t apply to all men. There are still plenty of bad asses, in the traditional sense, walking these streets. But the streets have PinkBerry on the corner and the cars passing by contain grown men singing Taylor Swift’s latest.

Albert, Seth MacFarlane in a capable leading effort, seems like he was plucked from our world and deposited on the dusty ground beside a saloon. He’s disgusted by his peers and fearful for his safety at every turn. And rightfully so. Peril lurks around every corner, from duels and wild animals to kooky doctors and giant blocks of ice.

Albert’s life is made bearable by the presence of his two friends, Edward and Ruth (played by the talented and underutilized Giovanni Ribisi and Sarah Silverman).   He’s also slavishly devoted to his girl, Louise, who accepts that he’s a lowly sheep farmer still living with his parents. At least until she dumps him for Foy, played with finesse by the scene-stealing Neil Patrick Harris, the debonair owner of the town’s local Moustachiery.

The film’s first act plays like Seth MacFarlane’s stand-up routine of everything he feels is wrong with the time he lives in – ignorance, religion and violence – set to the backdrop of period-appropriate visual gags (as a side note, he seems to use the West as a safe proxy on which to unleash the vitriol he has for so-called “conservative” tendencies in today’s America). And it works. The humor is a mix of bathroom and social commentary familiar to Family Guy fans. The supporting characters contribute a lot, and this feels like the beginning of a solid ensemble comedy. Then Liam Neeson rolls onto the scene.

Neeson plays Clinch, a gun-toting villain of local legend.  He’s accompanied by his gang and wife Anna, played by Charlize Theron. The two become separated and Anna winds up in Albert’s town. The two meet, sparks fly and the movie becomes something else. The pace slows, the supporting characters fade into the background and Albert and Anna have a paint-by-numbers insta-relationship:

They meet – They’re friends! – She helps him get his girl back by taking him out of his comfort zone – He struggles – He improves! – Is there more to the friendship? – There’s more! – Her husband returns – You’re married? – But he’s evil and I love YOU – Too late – Or is it? – Final showdown!

Not that there’s anything wrong with romantic comedies. They’re like any other genre – some are mediocre, some are amazing. The problem with this movie is that it was shaping up to be something better and more interesting than how it turned out. It’s not that the movie is without humor once the romance begins. There’s a great musical number – a Macfarlane specialty – and chuckles sprinkled throughout, mostly courtesy of Harris and his endless charm. But they’re too few and far between, and the movie slowly rolls towards its conclusion like tumbleweed past a batwing door. And I sat in the theater thinking of different ways I could be spending my time, and wondering when the next Taylor Swift album would drop.