Out comes the douchebag Batista to the ring. He lists off his past accomplishments and wonders why everybody wanted him back (that seems a bit exaggerated, but this *is* wrestling) only to boo him out of the building every week. He doesn’t understand why the WWE fans love somebody like a goat-faced Daniel Bryan when they have Batista. Stephanie McMahon’s slap to Batista and then the subsequent spear to Randy Orton gets replayed from Monday Night Raw. Batista is confident he’s walking out of WrestleMania 30 the WWE world heavyweight champion and doesn’t care who he beats; Orton or Triple H. He comments that perhaps Stephanie should be in the match since she slaps harder than all of them. Well, that brings out the COOHHH to the rescue. Nobody says anything about his wifeypoo and gets away with it. Batista feels she matters because Triple H wouldn’t be wearing a suit right now or have the Chief Operating Officer title otherwise. Helmsley reminds Batista that this is the “reality era” and feels Batista shouldn’t worry about how something is the way it is. HHH wonders why Batista is trying to make this personal, but he reminds HHH that he’s never beaten him and now Triple H is just trying to “implant himself (or Daniel Bryan) into the WrestleMania main event” to win what Batista returned to get: the WWE title. Triple H says that Batista only defeated him when he was “fresh off of standing by his side”. Once success hit Batista, HHH thinks he got lazy and ran off to Hollywood where the stunt men and assistants do all the work. Long story short, Triple H doesn’t feel like Batista is the “Animal” he once was ever since he came back to WWE. HHH says he showed the world what he still could do when he assaulted Daniel Bryan a couple weeks back. When Batista was faced with the same opponent, he couldn’t even finish off Daniel Bryan. HHH is prepared to help Batista hone his skills though with a match tonight against…Sheamus. And there ya go.

Let Us Take You Back: Smackdown, 3/21/14. Kane and the New Age Outlaws left the Shield laying in the middle of the ring.

Both teams exchange very short control segments here. Ambrose gets a hot tag and handles 3MB by himself. Mahal gets dumped out for a pescado by Rollins. Meanwhile, Ambrose puts away McIntyre for what he’s now calling Dirty Deeds for the win. (3:00) It’s that headlock DDT he does. Nothing too interesting since 3MB aren’t much of a threat, but the Shield looked great as always. *

Corporate Kane walks out with the New Age Outlaws and puts the Shield boys into another match, this time with Rybaxel.

This match started during the break. Ambrose is stretching Axel on the mat, but then ends up on the wrong apron, and knocked to the floor. Back inside, Rybaxel manage to keep Ambrose in their corner for a few moments. Ambrose counters a suplex by Ryback into a DDT to set up the hot tag to Rollins. He’s got the most exciting hot tag in WWE today. Ryback tries to grab Rollins on the apron, but gets punted away and then tackled by Ambrose. Meanwhile, Axel gets dumped out on the floor so that Rollins can wipe out Rybaxel with a somersault plancha. Back inside, Rollins puts away Axel with the Curb Stomp formerly known as the Black Out for the 1-2-3. (4:00 shown) Afterwards, Roman Reigns nails Ryback with the Superman Punch just because he can. To further send a message to Kane and the NAO, Ryback also receives the Triple Powerbomb. I mean dang, bring out the Real Americans so the Shield can just dominate the entire tag division in ten minutes, why don’t you. But seriously, this just confirms what we already know. The Shield will bring it to the New Age Outlaws and Kane at WrestleMania. Fun stuff. **

Rematch from Monday Night Raw. Doubt there will be any Scooby Doo appearances here. Before you know it, Sin Cara surprises Sandow with an O’Connor roll for the three-count. (1:00) What are the odds that Sandow wins the Andre the Giant Memorial Battle Royal? ½*

In the back with Renee Young, Big Show cuts a quiet promo as he prepares for Bray Wyatt in tonight’s main event, saying that he’s got a *giant* problem on his hands. Then again, so does the Wyatt family.

Summer Rae is wearing her “Aladdin” outfit tonight, says Cole. Then the “I Dream of Jeannie” references come up for all the kids out there who have no idea what they’re talking about. Goldust gets dominated to start, but comes back with his usual. Out to the floor they go, Summer Rae runs some interference and allows her man to stomp Goldust on his way back inside the ring. Fandango pins Goldust with a handful of tights for the cheap win. (3:15) JBL calls our winners, “Fred Astaire and Ginger Rogers”. Just stop, you guys. *

Cole correctly calls this a “first time ever” meeting of these two. COOHHH watches on from backstage. Batista is busy ducking Sheamus to start. Once he’s on the floor, he lets Sheamus chase him back into the ring so that he can stomp Sheamus real good. Batista takes over and gets a little rough with Sheamus with clotheslines and knee smashes to the face. Spinebuster connects and Batista sets up for the finish, but Sheamus hops up and clotheslines him down. Sheamus pounds on Batista’s chest and delivers the powerslam. Batista slides out before he sees the Brogue Kick and grabs a chair to jab into Sheamus for the DQ. (5:30) Batista hits Sheamus again with the chair and runs him into the post before taking him back inside for the Batista Bomb. Once again, Batista reminds us he’s leaving WrestleMania 30 as the WWE champion. Deal with it. Wow, Batista is blown up! **

Time for the Raw Rebound: John Cena gets the sheep’s mask! For all the details, check out Scott’s Raw Recap.

In the deepest and darkest place in the arena, the Wyatt family discusses the metaphor of hiding behind masks. Bray Wyatt has broken you, John. Tonight, Bray will slay a giant with his sword. And then he quotes something Sister Abigail says, I suppose. He’s got the whole world in his hands…

Smackdown GM Vickie Guerrero joins us for commentary to hype her first-ever “Vickie Guerrero Invitational” match over the Divas title at WrestleMania 30. She won’t tell anyone what the rules will be. Nikki just gave AJ a Disaster Kick and it’s never mentioned. Tamina comes in and drops Nikki with a Samoan drop. AJ grabs a guillotine choke and then switches over to a sleeper hold on Nikki’s back. In comes Tamina after a tag. Another Smackdown, another miss from Tamina off the second rope. Tag to Brie, she knocks Tamina to the floor with a missile dropkick. Brie catches AJ napping, but then gets a forearm smash to the other side of the ring by Tamina. After that, AJ starts yelling at Tamina for some reason, and gets shoved down. All confused, AJ is tagged in and receives the Bella Buster for the victory. (3:15) Actually, not that bad of a match. You knew the problems were coming between AJ and Tamina once Tamina smiled at the fact that she would be in the VGI match at WrestleMania. Maybe it was a long time coming and I just didn’t even notice. Hmph. *½

Earlier today, Santino Marella and Emma go on a fancy dinner together. Uh oh, Santino has been friend zoned. When he tries to tell Emma how he feels, he gets the dry heaves and is afraid he’s going to puke. Somebody’s been watching Sunny in Philly! He takes a sip of wine hoping it will make him feel better, but spews the wine all over Emma. Time to leave, pal.

Los Matadores will now join the Real Americans, Rybaxel, and the Usos in a fatal four-way match over the WWE tag titles at WrestleMania 30. Jimmy has little trouble with Swagger to start. He’s hitting him with a plancha onto the floor, a flying bodypress for a nearfall, and a corkscrew moonsault press. He looks for the buttalanche in the corner, but Swagger cuts him off at the knees and applies the Patriot Lock for the tapout. (2:00) Short and sweet with a lot of action. *

– Mark Henry vs. The Miz

Mark Henry used to tell his pals in school he was friends with Andre the Giant? That kid needed some real friends. Miz avoids the World’s Strongest Slam to start and goes after Henry’s knee. Henry comes back with a powerslam and JYD headbutts Miz to a corner. Pump splash from Henry misses. Miz tries for the Figure-Four, but gets kicked away. When Henry leans on the ropes, Miz runs over and flips him out to the floor, which just pisses off Mark. He proceeds to throw Miz into the steps and then into the barricade. Back in, Henry delivers the World’s Strongest Slam for the win. (3:30) Not a good week for Miz. Just filler getting us hype for the ATGMBR. ¾*

More WWE Hall of Fame inductee videos. What a weird class this year. It should make for an interesting ceremony, for sure. 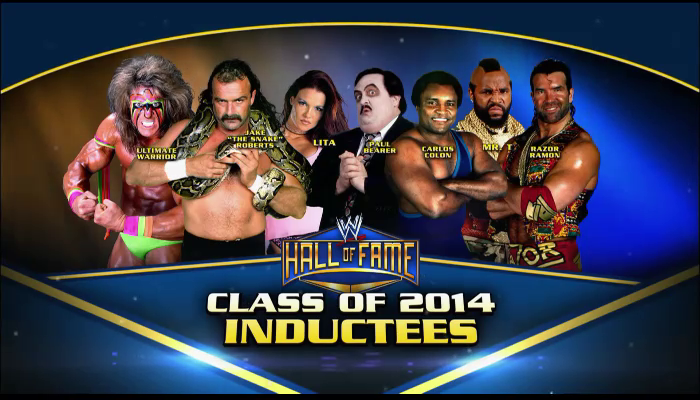 Show throws Bray around to start and then gets dared by Bray to show him some more. He SHHH slaps Bray in the corner and puts him down with a big boot, but misses an elbow drop. Bray stomps him a bit and delivers a senton splash for two. With Show in the corner, Wyatt does the crab walk and charges into a clothesline. Show misses a corner charge and receives an avalanche. Bray tries one more time, catches the boot from Show, and drops to his knees to hyperextend Show’s knee. Bray hits Show with the running body block. As Show rolls to the ropes, Luke Harper catches him with his big boot. With Show now completely out of it, he’s easy pickings for Sister Abigail to give Wyatt the victory. (4:00) I said two weeks ago he needed a big win before facing Cena and this could be it. Follow the buzzards, ya’ll. *½

Final Thoughts: They managed to get the most out of the shortest segments here to continue the hype for WrestleMania. I wonder what they will do for next week’s Smackdown though, because there’s no taping scheduled for April 1.