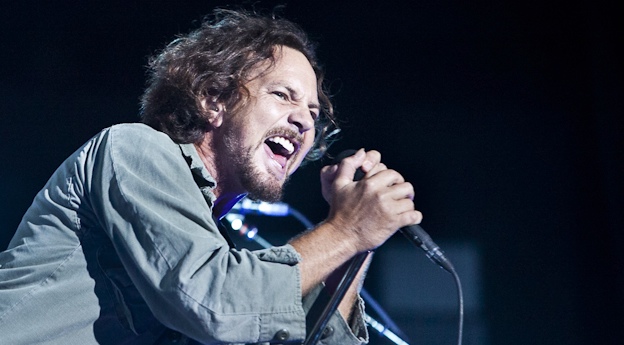 I will preface this piece by telling you up front…Pearl Jam is my favorite band. The first time I heard “Yellow Ledbetter” coincided with the best night of my 15 year-old life. I had visited my older cousin in college and had a night for the ages with the older guys. I can’t reveal too many of the details to protect the innocent, but let’s just say a stripper in a Domino’s pizza delivery uniform was prominently involved. Much like “Tuesday’s Gone” represented the end of the best party in Dazed & Confused, “Yellow Ledbetter” capped this night off perfectly as I sat in silent reflection of the crazy things I had done. In my mind, I had made the transition into adulthood and Eddie Vedder was right there with me to guide me through with the unintelligible brilliance that is that song. If you call my cellphone today, this is the song you will hear.

Fast forward seventeen years and I was laying in a hotel room at Planet Hollywood in Las Vegas at 3:00 AM, just hours away from marrying my best friend. While others were out carousing, I was watching Pearl Jam: Twenty; the fabulous Cameron Crowe biopic. Again, the rockers from Seattle were with me as I embarked on a terrifying, yet wonderful, journey into another phase of my life. As I watched the documentary and became entranced by the story and unbelievably good music, I came to a realization: Pearl Jam’s story coincided pretty neatly with my own. Let’s just say we both started out stronger than anyone could have anticipated, including ourselves. A lengthy rough patch followed where we lost our way for a bit and arguably became our own worst enemies. In the end, through perseverance, self reflection, and some good old fashioned love, we found our way back to what birthed our success in the first place and came out of the doldrums relatively unscathed. With all that said, I had never seen my favorite band live. This is criminal, I know. When the opportunity presented itself to attend their concert at the DCU Center in Worcester, I jumped at the chance. With my beautiful wife by my side, we took our seats for what would be a nice night of “old” music for her and a truly religious experience for me. As the lights dimmed, an hour later than anticipated due to the Red Sox victory in the ALCS (KOJI!!!!), I gave my wife a quick glance that she didn’t notice and took a moment to again reflect on my experiences of the last nineteen years. As it was to the young man sitting in that college dorm room so long ago, the moment was perfect and one that I will never forget.

The concert was nothing short of amazing. Pearl Jam opened with the powerful “Release” off of the iconic “Ten” album. Even his late 40s, Eddie can still bring it. With a Boston Strong patch on his sleeve, he roped the crowd in from the opening verse. Throughout the marathon first set, they seamlessly transitioned from slower, more melodic tunes such as “Elderly Woman Behind the Counter in a Small Town” and “Nothing as It Seems” into hard rocking jams like “Even Flow” and “Do the Evolution”. They kept the crowd on a string through the first 19 songs before closing with an extra long version of “Better Man” that had the audience in a frenzy. Eddie somehow found the time to drink a full bottle of wine and use the words “God”, “David Ortiz”, and “Boston Miracle” in the same sentence. To say this was a popular statement would be under selling it. For the first encore, Eddie came out with his acoustic guitar and played beautiful versions of “Man of the Hour” and “Just Breathe” amongst others. They followed that up with hard hitting “Spin the Black Circle”. To commemorate this, a vinyl edition of their new album “Lightning Bolt” was provided to a lucky fan in the front row. “Lightning Bolt” was actually released to the public on the same day as the concert and Eddie was happy to let everyone know that as of 10:00 PM or so it was currently the #1 selling record on iTunes in over 50 countries. They finished up the first encore with a crazy version of “Porch” where the lightning rod lead singer channelled his younger self and swung out over the audience on what looked like a very large, green Christmas ornament.

For the final encore, they started out with “Last Kiss” and were nice enough to face the fans who were seated directly behind the stage. They followed that up with “Crazy Mary” and a lengthy version of “Alive”. At that point, the roof felt as though it may literally pop off the building. They closed things up with “Indifference”. Unbelievably, this was the 32nd song they had treated us to. As they left the stage for the evening, many members of the crowd stayed standing and cheering for a full five minutes hoping against hope that this wonderful show didn’t have to end.

As we were walking back to our car, Pearl Jam t-shirts in tow, my wife remarked to me that it was the best concert she had ever attended. Mind you, she is quite a bit younger than me and did not grow up during the grunge era. She had listened to Pearl Jam many times before, not always willingly, and was never much of a fan. After seeing them live, she is now a member of our not so exclusive club.  As for me, of course it was the best show I’ve ever been to and I would highly recommend it to anyone. Here’s to another two decades of life, love, and Pearl Jam!