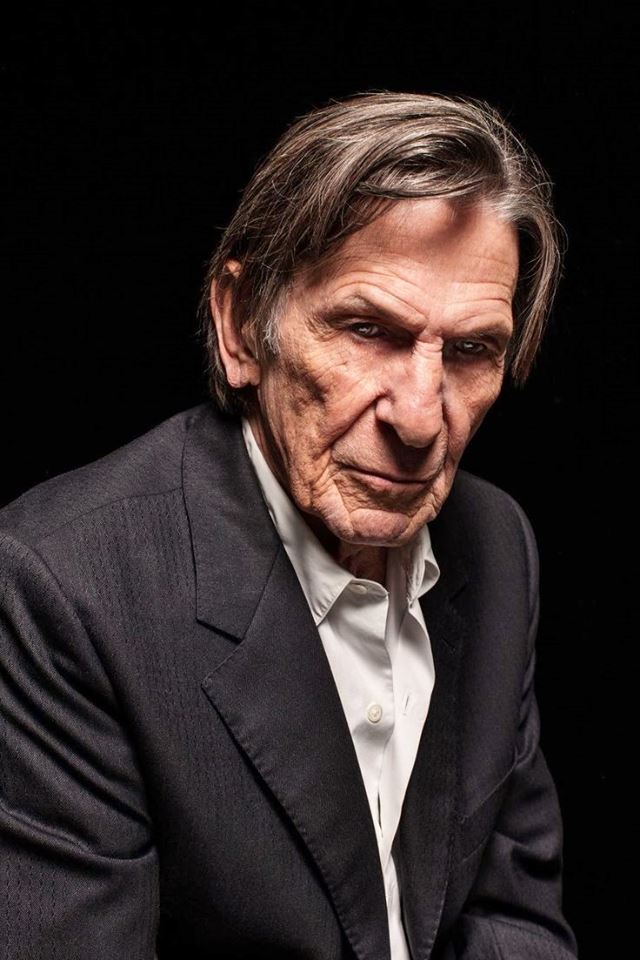 Leonard Nimoy was a poet, a photographer, an author, a father, a grandfather, a singer, a pilot, and a director. In his photography he emphasized confidence, honesty, and beauty found in places where one is not usually told to find it. On Twitter he was a warm and generous presence for his legions of fans, offering to serve as an honorary grandfather to anyone who needed one. Now we are without our grandfather.

Obviously, Nimoy is best known for his vast contributions to Star Trek. Among everyone who created the series and has shaped the franchise since, Nimoy stands out as someone whose role has stretched from the first, ill-fated pilot episode, completed fifty years and one month ago, all the way to the most recent film in 2013. First imagined as a relatively smaller role, serving under the captain to fill the requisite alien role as the “satanic” Spock, the character gained his trademark logical ideology between the show’s first and second pilots, and when the series began in earnest he experienced an unexpected boom in popularity. While all of the characters in the original series came to be beloved to an extent, Spock outpaced even the dashing Captain Kirk. For some, Spock served as an easier figure to identify with — whether as an outsider, a person torn between two worlds, or someone who experienced vicious bullying as a reaction to his differences from others, he offered hope and consolation. For others he was simply the most intriguing character on the show. Written at first as a cold, dispassionate person with lines like “‘Irritating?’ Ah, yes, one of your Earth emotions,” Nimoy never played Spock as totally emotionless, always giving Spock shades of feeling beneath his controlled exterior. Once the series’ writers picked up on the subtleties of Nimoy’s performance and integrated them into the character, Spock (and every major Vulcan character since) had the pathos that made him so appealing: his cold exterior is just that, a front that he must sometimes struggle to maintain but which also keeps him at a remove from the people he’s steadily, somewhat unwillingly, growing closer to.

In Star Trek: The Motion Picture Spock makes a very serious attempt to do away with his emotions once and for all, but is swept up into the plot of the film (as he must be), eventually having a transcendental experience and realizing the wisdom that lies in integrating the two halves of his being. The character doesn’t change drastically, but Nimoy’s performance in the rest of his appearances is as a Spock who’s a little more at peace with himself. While Nimoy changed his mind a couple of times about whether or not to appear in the Star Trek films or whether to stay once he did (an ambivalence with his role expressed in his autobiographies I Am Not Spock and I Am Spock), he asked that Spock be killed off in Star Trek II: The Wrath of Khan and then decided that in order to be lured back for Star Trek III: The Search for Spock he would need to direct the film as well. Nimoy would direct the third and fourth Trek movies, both of them among the best in the series, with The Voyage Home proving to be one of the most popular and commercially successful entries as well. In 2009, Nimoy, long since retired from acting, returned as Spock to add a sense of legitimacy to J.J. Abrams’ new Star Trek. Rather than a straightforward recasting & reboot, Nimoy’s presence shifted the movie in a more interesting direction as a sort of sideways continuation, the combination of Nimoy with Zachary Quinto’s younger Spock emphasizing the character even further. Nimoy enjoyed the experience of working with Abrams so much that he was convinced to take a prominent guest role on Fringe, adding one more role to his sci-fi legacy, in addition to one last cameo in Star Trek Into Darkness. Recent rumors have suggested that roles were being considered for both Nimoy and William Shatner in the thirteenth Star Trek film, their first appearance onscreen together since 1991, which will now be impossible.

Nimoy was recently diagnosed with COPD, nearly thirty years after he quit smoking. He’s survived by his children, grandchildren, honorary grandchildren, and millions of fans. May his memory be a blessing. 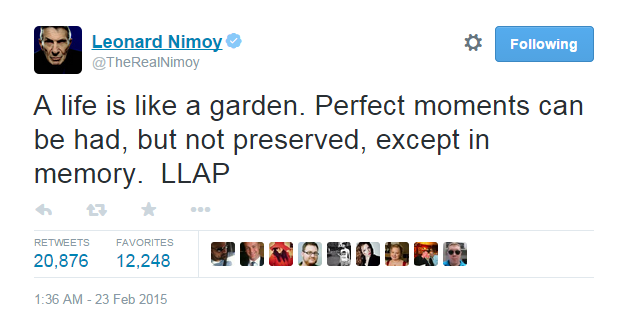