(Warning: Spoilers and in-game jargon ahead.)

I’ve never been one for RPGs. For me, having to deal with so many stats for so many different people and objects tends to detract from gameplay — so much so that I never completed a game in this genre for most of my gaming history. Despite this, my best friend bought me a copy of Fallout: New Vegas last year, insisting that it was an RPG that I would enjoy much more than the others I’d tried.

For the most part, she was correct. It wasn’t long before I found myself deeply invested in the storyline and adjusting to the various weapons, but again, the stat system was killing my enjoyment quite a bit. To resolve this, my bestie put my save file on a flash drive, disappeared for about half an hour, and then returned to tell me that my file had been hacked and I was now essentially a god, courtesy of TooTooBang’s Mod. With the stats eliminated, I happily resumed what I did best: Wrecking shit and completing dialogue trees.

This all came to a screeching halt, however, when I completed the Lonesome Road DLC chapter. 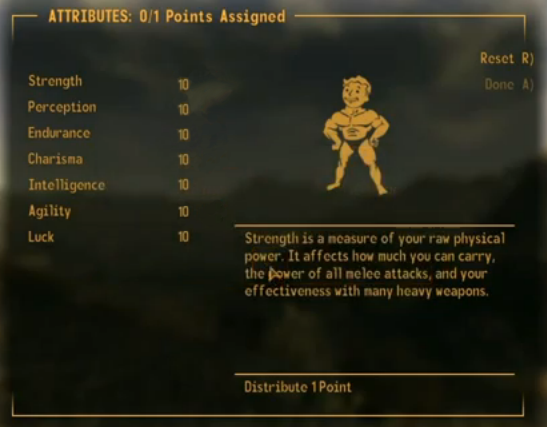 As many gamers before me have woefully discovered, this menu pops up upon leaving The Divide and returning to the Mojave Desert. The game is trying to reward the player by offering a free point to one of the courier’s S.P.E.C.I.A.L. traits, but as you can see, all fields are maxed out. The point can’t be added, the numbers can’t be lowered, and this screen can’t be skipped.

This was going to take some ingenuity.

Like any lazy gamer seeking a quick solution, I turned to Google for help, expecting the endeavor to take maybe five minutes. To my surprise, all I could find were ways to hack the PC version of the game (along with a lot of people sneering at hacking games in general). My drug of choice happens to be an Xbox 360, for which I found significantly fewer solutions and a lot more bad news; in fact, the Fallout Wiki itself states that if you get an automatic S.P.E.C.I.A.L. point while your stats are maxed (specifically citing Lonesome Road as an example), the screen is impassible and the only way out is through console commands.

Without a lot of options available, I realized that I had two “solutions” at my disposal. I’d either have to leave The Divide before confronting Ulysses (and thus forfeiting the reward he leaves afterwards), or I’d have to find a way to avoid getting that point all together.

After several rounds of testing, I determined that an in-game timer activates to set off the pop-up menu once the courier is deposited back at the Canyon Wreckage site. This timer only lasts 3 seconds, but if you choose to launch the missiles at one or both targets, this buffer is actually extended to 10 seconds (as the game wants you to watch the explosions before the menu appears). That’s more than enough time to try a trick or two, especially since the timer pauses if you pull up your Pip-Boy.

Following much trial and error, I’ve ironed out that the following techniques DO NOT work:

The ONLY THING that will get you out of this situation is the Transportalponder.

To get this item, you must have the Old World Blues DLC and complete it PRIOR to completing Lonesome Road. Even TooTooBang’s Mod doesn’t have the DLC items in the schoolhouse, so it can’t be obtained without going through the Big Empty.

Before you flee Ulysses’ Temple, make sure you have your Transportalponder equipped, especially if you’re not firing off any missiles. I also recommend setting a save point before you finish as well, just in case something goes awry and you want to try again without repeating the battle. As soon as you’re back in the Mojave, you can raise the Transportalponder (it’s at your hip by default) and fire to instantly teleport to the Big Empty before the Lonesome Road exit timer expires.

If you let Ulysses live and want to gather the loot that he left for you as well, it can be done before you leave should you fire the missiles. Remember, the timer won’t begin until after the explosions have finished, giving you about 10 seconds of control in total before the menu activates. (If you didn’t shoot the missiles, you’ll only have the 3 seconds, which doesn’t seem to be enough time; as of this writing, I’ve never successfully gotten the footlocker items and escaped in this circumstance, but perhaps a better gamer out there can pull it off.)

The moment you regain control, take a couple steps forward and look down. The footlocker from Ulysses is literally right in front of you.

Open it up and pillage everything you’d like to keep. Like the Pip-Boy, the inventory screen pauses the timer, so you can spend as much time here as you like without panicking. After taking everything you want, back out of the inventory and raise your Transportalponder (if it’s still at your hip) and fire it to warp away.

Returning to the Divide

Anything you have left to do in The Divide must be completed BEFORE you warp away with the Transportalponder. ONCE YOU LEAVE THIS AREA, YOU CANNOT COME BACK AGAIN. Just because you’ve escaped the timer doesn’t mean you’ve eliminated it. The timer is connected to the Canyon Wreckage location, and from what I can discern, your presence activates the countdown. If you try to go back to The Divide again after having left, the counter will resume and the impassible menu will pop up. Saving and reloading the game file doesn’t have any affect on this.

That having been said, there IS a way to get back inside The Divide before you leave for good, provided that you fired the missiles. Once you have control or your character, immediately turn around and run back to the door into The Divide; if you want the items from Ulysses, you must collect them before you head back inside. Assuming you don’t have any major hang-ups, you should have plenty of time to collect your goodies and still make it in. (If you chose not to fire the missiles, there’s no way for you to get back in; the timer runs out long before you make it to the door, even at top speed.)

Once you’re on the other side of the door, you can breathe easy, as the timer isn’t running within the Lonesome Road DLC. You can now round up any remaining achievements you missed or speak with Ulysses if he survived the showdown. I recommend going through his entire conversation tree, as he’ll give you several items and craft things for you if you have the supplies.

When you’re completely finished with The Divide and are at peace with never returning, make your way back to the door to the Canyon Wreckage, again with your Transportalponder at the ready. As soon as you make it outside, hit the fire button to immediately warp to the Big Empty; the timer will reactivate once you return to the site, and if you don’t shoot right away, the menu will pop up and you’ll have to try again.

Saving, Achievements, and Other Things

Regardless of how you escape — whether you get the loot, back inside, or leave right away — I recommend immediately saving and reloading your game once you arrive in the Big Empty. I’ve found that the game becomes prone to lagging and/or freezing once you escape, possibly because the game expected an event that never happened, and reloading clears this up as far as I can tell.

Speaking of lag, I’ve also found that the game sometimes hangs up when you try to re-enter The Divide as the explosions are going off in the distance. If the image locks up but the sound continues to run, give it a moment or two to see if it’ll resume on its own. If it doesn’t free up, press the home button on the Xbox controller and give it a few more minutes. Once the home menu appears, back out of it, and the game should snap back into action. (This technique has almost always worked for me while playing Fallout: New Vegas in any situation where the game hangs up, not just at The Divide. I don’t know if there’s a PS3 or PC equivalent of the problem, let alone the solution.)

You can still win the Hometown Hero achievement for completing this DLC, but in order for the console to recognize that you’ve finished, you’ll almost definitely have to go through the ending sequence twice. In every instance I’ve observed, the achievement doesn’t appear until the menu pops up, so unless yours just happens to unlock early, you’ll probably have to win the achievement and then reload.

And even if you mess any of this up, don’t worry; none of the events in the Canyon Wreckage make the game auto-save, so even worst case scenario you’ll still be able to go back to the save just before confronting Ulysses and try again. Maybe someone out there can even use this fact to get the rewards out of the footlocker and escape without setting off the missiles. If you manage to pull it off, let me know!

Otherwise, I hope this was helpful to all of those Xbox players that don’t have the luxury of a game editor.