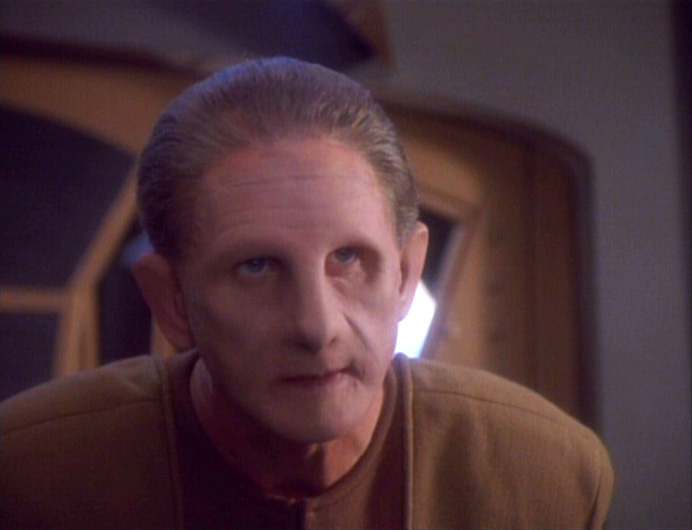 Constable Odo has a seemingly innate sense of order that gives him his sense of justice. It must be distinctly irritating, then, to have new administrators imposing new restrictions on what he can and cannot do to get his job done. “Laws change depending on who’s making them,” he tells Commander Sisko, “but justice is justice.” For Odo, whose essence as a shapeshifter is emphasized over and over again in “A Man Alone,” this unchanging moral center is what gives him stability; he can change at a whim, but justice stands fixed. The trouble, of course, is that there is no objective standard of justice, and no matter how much Odo personalizes his job — referring to the central avenue of the station as his promenade, to police as he will — he’s still one part of a larger system.

The position of the security chief became one of the expected parts of a Star Trek ensemble on The Next Generation, after not being emphasized in the original series. In Deep Space Nine, though, it’s essential: where Gene Roddenberry famously sold the original series as Wagon Train to the Stars, DS9 was conceived of in broad strokes as The Rifleman in Space, and if you’re taking your cues from a western in any but the broadest strokes, you need a sheriff. Odo’s gruffness and pragmatism fits with one version of the sheriff archetype as well as providing one of the alien perspectives on humanity that Trek has in every incarnation, this time with more of a cynical eye than viewers would have been used to on TNG.

It’s reasonable enough to introduce the security chief/sheriff of this new show through a murder-mystery plot, though as the title of “A Man Alone” belies, the episode is far more interested in examining Odo’s isolation and its effects than in pursuing a straightforward investigation. In “Emissary” Odo had a brief bit of exposition to tell the audience that he doesn’t know where he came from or whether there are any other shapeshifters like him out there, somewhere, establishing his internal pathos; in “A Man Alone” we see that same uniqueness more externally, in terms of how others relate to him, including more fear and prejudice than one might expect to see in Star Trek at this time.

Odo’s “justice is justice” line comes when he wants to lock up a man, Ibudan, who hasn’t yet caused any trouble for anyone; this being a TV show and Odo being a part of the main ensemble, Ibudan will cause trouble very soon, but we can still see his desire to lock someone up for having a dodgy past as slightly more fascist than we ought to be comfortable with, and deservedly moderated by Sisko. And yet when Ibudan is murdered and the scant evidence seems to point to Odo, he doesn’t try to cover anything up, he just continues his investigation. Justice is justice, remember, and since Odo knows he didn’t kill Ibudan, he’ll just keep trying to find out who did. It almost doesn’t even occur to him that anyone would have a problem with him investigating the crime because, after all, justice is justice, and surely he’s still the best person around to carry it out. The humanoids see things differently, though for different reasons. Commander Sisko, whose character largely stays in the background this week while the show fleshes out the rest of the ensemble, removes Odo because of a simple conflict of interest. The guest stars and background players, though, use that reasonable objection as a pretext to cover the racism that only becomes more pronounced later. 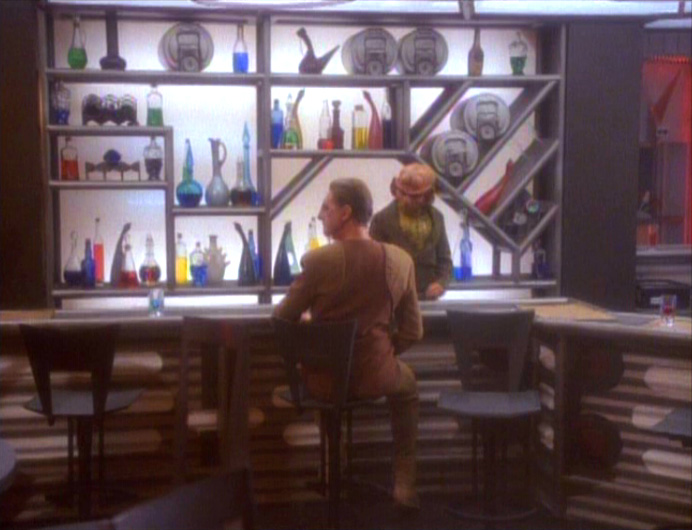 Where in “Past Prologue” we saw one man from an extremist splinter group express nativist sentiments — Bajor for Bajorans! — in “A Man Alone” that’s being expressed by a representative of the Bajoran government, Zayra, and tacitly agreed to by what quickly becomes a mob. Zayra acts as the lead instigator of a riot that threats to break out, at one point making the episode’s intentions blatant by asking “How do you get a rope around the neck of a shape-shifter?” DS9 is a young series, and is still establishing many things about the intersecting worlds that form its premise, but to have a lynch mob form so quickly among the citizens of the station is somewhat disquieting. (Viewed from another perspective: the people have no faith in the person who’s been entrusted with policing them. They don’t feel they’re safe, they don’t feel that someone from outside their community should have this sort of authority, and they believe that some evidence pointing to his culpability is enough to convict him in the court of public opinion. But Deep Space Nine isn’t yet prepared to make this sort of critique of authority, and “A Man Alone” is structured such that the crowd is not only wrong, but quick to resort to racism.) 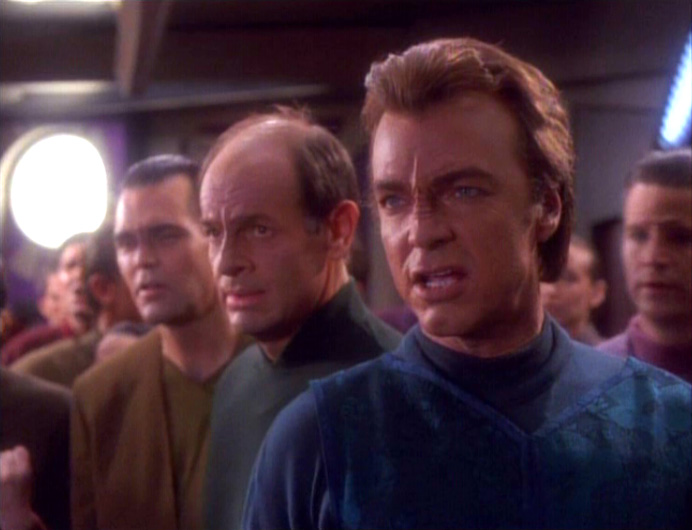 There’s a great scene in which Odo returns to his security office to find it vandalized, computer panels shattered, “SHIFTER” carved into the wall. (As racial slurs go “shifter” is relatively tame, but this is television. It at least suggests that Odo is, well, shifty. Ha, ha.) Quark appears and the two banter as usual, Auberjonois and Shimmerman showing the chemistry that already makes their characters work so well together. The actors’ chemistry combined with the characters’ banter puts a layer of friendship under their adversarial relationship that doesn’t need to be spelled out (though it was in an earlier scene). Judith & Garfield Reeves-Stevens’ book The Making of Star Trek: Deep Space Nine reveals that a subtle bit of characterization in this scene — Quark picking up data PADDs from the floor only for Odo to snatch them out of his hands, except for the last one, which Quark offers and Odo accepts gently — wasn’t in the shooting script, and was improvised by the actors during filming. So while the show is still fleshing out its characters and the relationships between them, Quark and Odo already have their subtext set: Quark does not share Odo’s unbending sense of justice or his devotion to it, but he understands it, and he can work with it. Odo might be lonely, but he’s not completely alone.

The exact nature of the murder mystery’s resolution — that Ibudan cloned himself, murdered the clone, and framed Odo as revenge for imprisoning him years earlier — is of such little importance to the episode that it’s only touched on as absolutely needed. Once Odo is removed from the investigation, Bashir and Dax basically spend the rest of the episode waiting for a biological sample to grow large enough for them to discern that it’s a person, giving them the final lead needed to discover that it’s another clone of Ibudan. (This is just as well, as Star Trek has what one might call an uneven track record with murder mysteries, and it’s typically best to avoid too much specificity about twenty-fourth-century forensics.) Bashir interrupts the near-riot on the promenade, explains the plot, and all that’s needed to tie everything up is for Odo to get his revenge via a Scooby-Doo-style unmasking of the real Ibudan. 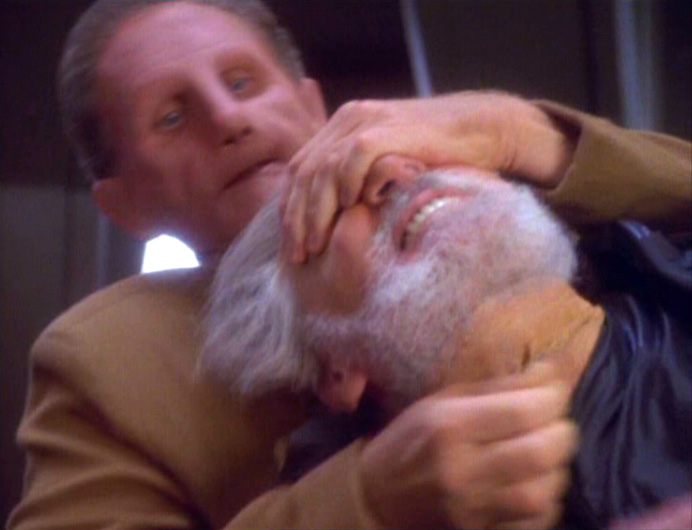 The focus on character that makes Odo’s development more prominent than the murder-mystery plot drives the episode’s B- and C-plots even more in that direction, as part of the continuing effort to give everyone in the main ensemble and the guest cast something to do. This is mostly why “A Man Alone” was pushed back one week in the airing schedule and “Past Prologue” moved up, as the latter had more of an action hook to supplement Kira’s character work, and it was thought that the first regular episode following “Emissary” should be more plainly exciting. “A Man Alone,” instead of beginning with a starship chase or explosions, shows where its focus will be with a character moment between Lieutenant Dax and Doctor Bashir, each of whom has had a little to do so far in the series but don’t really have their characters set. Dax in particular is the focus of some awkward and irritating attempts at romance by Bashir. She tells him that Trills find human-style romance a nuisance and use their elongated lives to live on a higher plane, but considering Sisko’s stories about carousing with Curzon Dax back in the good old days (not to mention the rest of the series), one gets the sense that this is just a bit of misdirection to get Bashir to back off since he didn’t appear to accept Dax’s more subtle refusals. Then of course there’s Bashir’s idea that Sisko is “the competition” and his expectation that they’re going to enter into a tired TV love triangle, deftly defused by Sisko valuing Dax first and foremost as a friend and wanting to build a new friendship with her, different from the one he had with Curzon but still important to both of them, in an interesting sort of relationship you can only really do in science fiction. However, we’ll see in future episodes that Julian Bashir: Nice Guy isn’t quite done yet.

Another potentially problematic element of the episode is Keiko O’Brien’s unhappiness with life on the station, somewhat stereotypical arguments with her husband, and eventual decision to start a school on DS9. While schoolteacher is also a stereotypical occupation for one of the show’s women, Keiko is introduced as a botanist with serious scientific interests as well as a concern for the station’s children, and Kira & Dax provide contrasting roles for women as officers, intellectuals, and scientists. On TNG, Chief O’Brien was unique as a recognizable minor character with a family and a home life; on DS9 he’s unique for a starring member of a Star Trek ensemble for the same reason. Sisko’s son gives him a home life as well, but the O’Briens have a conventional three-person nuclear family, the depiction of which will be a long-term concern of the series. Keiko opening the school also highlights an element of twenty-fourth-century life that was somewhat glossed over on TNG, which had families and school classes on the Enterprise but rarely showed them, and to connect many of the show’s characters: Jake’s attendance connects Commander Sisko, Nog, his father Rom and uncle Quark, Keiko O’Brien, Chief O’Brien, their daughter Molly, and anyone else who may be involved with the school or interested in what’s going on with it. If we are to see Deep Space Nine as a community, the school is another way that the show is building a web of connections between characters’ personal lives outside of the chain of command, and even though Jake and Nog’s fathers are not pleased about their nascent friendship, that reach across cultures is emblematic of the coming-together of disparate species that is at the core of the series, and the reason it must ultimately reject mobs that would reject what they see as outsiders.

All Star Trek articles on PTBN can be found here.