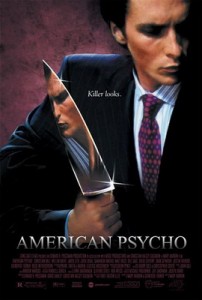 Plot: A wealthy New York investment banking executive hides his alternate psychopathic ego from his co-workers and friends as he escalates deeper into his illogical, gratuitous fantasies.

Review: I have to return some videotapes.

One of the best horror movies of the 2000’s happened to come out right at the start and with a sorta new actor in Christian Bale. American Psycho was based off of the book of the same name by Bret Easton Ellis and would bring us a new style of villain in Patrick Bateman. Keep in mind that, even though the film is based on a book, we’re only reviewing the movie.

Patrick Bateman (Bale) is a wealthy investment banker living in New York in the late-1980s. His life revolves around dining at trendy restaurants while keeping up appearances for his fiance, Evelyn (Witherspoon), and his circle of equally wealthy, shallow friends, most of whom he dislikes. Throughout the film, Bateman describes the material accouterments of his lifestyle: his daily morning exercise and beautification routine; his music collection (namely Genesis, Huey Lewis and the News, and Whitney Houston), his taste for expensive designer clothes; and the lavish couture of his apartment. Patrick is obsessed with horror movies, pornography, his business cards, and leads a secret life as a serial killer.

After becoming embarrassed by the superiority of coworker Paul Allen’s (Leto) card, Bateman makes plans kill him. Bateman gets Paul drunk and lures him back to his apartment. Bateman ambushes Paul and murders him with an ax. Bateman disposes of Paul’s body off-screen, then goes to Paul’s apartment to stage the situation so that others believe Paul has run off to London. After a few days, a detective named Kimball (Dafoe) shows up asking Bateman questions about Paul Allen, but Bateman is able to avoid suspicion.

Meanwhile, Bateman is getting even more sadistic with his victims. Picking up escort girls and killing them along with other random models he meets at nightclubs. The murders go from simple stabbings to straight torture with chainsaws. Bateman uses Paul Allen’s apartment to murder people as well as hiding the bodies. He ends up getting into a shoot out with police officers who try to arrest him for shooting a random woman on the street. Bateman is able to get to his office and call his lawyer for help, confessing everything on an answering machine. The next day, Bateman visits Paul Allen’s apartment one last time and finds it empty, for sale and the bodies he hid there are gone, as if nothing has happened.

Bateman meets with his friends and his lawyer asking him about the phone message. His lawyer thinks the message was a joke and then confuses him for a colleague, and even says he himself had dinner with Paul Allen just a day or so earlier. Bateman then realizes that he will continue to escape the punishment he deserves. He laments that there has been no catharsis and that he still remains a mystery to himself. Although he regrets that nothing has been gained, he still wants his pain to be inflicted on others. He finishes his inner monologue by stating, “This confession has meant nothing.”

I’ve always enjoyed American Psycho because it’s a different type of horror film. We’re following the killer, seeing his rapid decent into madness and honestly there’s no feeling sorry for this guy. The setting works great for the film as well, as we can see what it was like in the 80’s, when the young generation were making a killing on Wall Street and snorting away the nights like there was no tomorrow. It’s entertaining to watch Bateman navigate his world and deal with the characters in it.

The violence in the film is pretty tame by horror movie standards, but what makes the violent act have impact is that they are, for the most part, against women. Is the film saying women are the weaker sex? I don’t think so. I think Patrick Bateman just wanted to kill whoever he got and he got more chances to kill women than men.

Mary Harron does a great job taking us back to the 80’s and hanging out in New York. The nightclubs, the Wall Street offices, Patrick’s apartment, the whole yuppie vibe and lifestyle are done perfectly here. The film never gets boring as we’re either seeing Patrick killing someone or dealing with his brain-dead friends who constantly confuse him for someone else – a nod to these people being interchangeable with one another.

The soundtrack is one of the best, getting Whitney Houston, Huey Lewis and the News (a personal favorite) and Genesis in the film. Patrick’s obsession with music is an odd character trait to say the least, but the way he’s able to break down the meaning of the music and lyrics gives you a sense that there’s more to Patrick then we’re ever going to find out between his rampages.

My complaints, not many, revolve around not seeing much of the supporting cast. I would have loved to see Bateman dealing with his lush of a fiance, and his interactions with Detective Kimball were always fun. I also think the ending comes up suddenly with little build. Before we know it, the credits are rolling and there always feels like something’s been left out of the film.

Acting: Christian Bale had been acting in many films before American Psycho, but this his breakout role without a doubt. He is Patrick Bateman, no one else could have played the role. From his hilarious quirks to his sadistic acts, Bale nailed this role.

Willem Dafoe chews up the scenery as Detective Kimball, shame he had little to do in the film.

Reese Witherspoon is cute and funny as Evelyn, Patrick’s fiance. She’s barely on-screen but the time she’s there is hilarious.

Jared Leto played Paul Allen and did fine getting hacked to pieces.

Gore Factor: Let’s see, we get an ax to the face, a hooker getting a chainsaw dropped in her back, a stabbing and a few shootings. Fun for everyone!

Nudity Factor: The ladies get Bale bearing his backside and the guys get plenty of boobs from a few girls throughout the film. The three-way to the song Sussudio is hilarious.

Overall: American Psycho is not the perfect horror film, it’s not built to be a slasher nor is it there to really scare you. Instead we get a character piece and a chance to see things from the killer’s point of view. While we don’t feel sorry for Bateman, it is interesting to see what this guy does as he continues to basically lose his mind. The film does follow the book and those who enjoy the film should check the book out, as there’s more graphic killings and more violence then they could get into the film.