Professional wrestling and comic books have a lot in common: over-the-top theatrics, clearly defined heroes and villains, larger-than-life personas, and a unique mixture of action, comedy and romance. Yet when the world of wrestling crosses over with the world of comics, the results have often been disastrous.

From The Ultimate Warrior to Kevin Nash, several wrestlers have had comics based on their fictional exploits, but the books almost invariably introduce supernatural elements while treating pro wrestling as sport rather than spectacle, keeping the goings-on strictly “kayfabe.” As a result, wrestling fans find the books insulting while comic book fans find them laughable.

Enter: Mike Kingston. In 2007, Kingston developed the concept of Headlocked, a comic book series based on a college theater major, Mike Hartmann, who leaves his life behind to pursue a career as a pro wrestler. Beginning with “Headlocked: Work of Art,” Kingston worked with a variety of artists to create a fictional world that soon grabbed the attention of wrestlers such as Jerry “The King” Lawler, Rob Van Dam and Shane “Hurricane” Helms.

The latest book in the Headlocked universe, “Headlocked: The Last Territory,” has already surpassed its goal on Kickstarter and is expected to ship in January. With interior art by Michel Mulipola and Kickstarter-exclusive content from Lawler, Van Dam, Helms, Christopher Daniels, Beth Phoenix and more, the book focuses on Hartmann’s journey through the last remaining regional territory on his quest to make it to the big leagues of the WFW. The only way to secure a copy of the graphic novel is to contribute to the Kickstarter fund, and Kingston says any contributions made now will be used to fund future Headlocked installments. Greg Phillips of the Hard-Traveling Fanboys recently conducted an interview with Kingston about the project, its inspiration and its growing popularity. 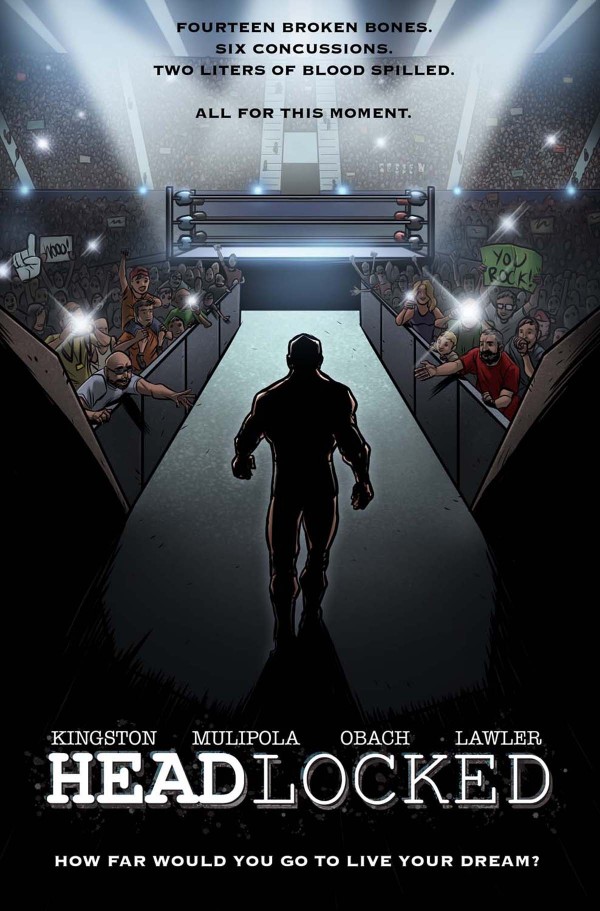 Greg Phillips: There is a long and less-than-stellar history of crossovers between pro wrestling and comic books. I’ll start with the question likely on the minds of both comic and wrestling fans — what made you want to merge these two worlds, and what make Headlocked different?

Mike Kingston: Like any wrestling fan that loves comics, I was frustrated by the quality of wrestling comics that would come out. So when I decided I wanted to write comics, I decided I would try and write the type of comic that I, as a wrestling fan, would want to read. You won’t see demons, post-apocalyptic futures, or naked Santa Claus. Headlocked is a book about wrestling and the passion it inspires.   I think the thing that separates Headlocked from other books is that everyone involved with the book is passionate about wrestling, comics, and art. We’re not here to sell action figures, cash in on a hot trend, or put over someone’s personal philosophies. We’re here to tell a story about a kid chasing his dream. A college theater major who unexpectedly falls in love with wrestling and his journey through the wrestling business. Is it going to be all sunshine and puppy dogs? Obviously not. But the story will always be respectful to the art and the craft of professional wrestling.

GP: You mention your love and respect for the art and craft of wrestling. How will you approach the actual wrestling in the comic? In the past, comics have taken a similar approach to video games and approached pro wrestling as actual competition. I get the impression Headlocked “pulls back the curtain,” so to speak. What do readers need to know about the industry heading into “The Last Territory,” and how will you and artist Michel Mulipola go about presenting the in-ring product?

MK: When I was coming up with the basic plot for Headlocked, I knew I wanted to make it accessible to everyone. So we begin Mike Hartmann’s journey at ground zero: the moment he falls in love with wrestling. At that point, he’s simply a fan. So to follow and enjoy the story all you really need to know is basically what professional wrestling is. It’s been tricky making it accessible to everyone but still making it engaging enough to keep longtime wrestling fans interested, but I think we’ve managed to pull it off so far.

As for the in-ring presentation, there is definitely no illusion of competition in Headlocked. It’s a reality based story so we are definitely pulling back the curtain on some things. But as any fan of wrestling will tell you, even though it’s predetermined (I hate calling it fake) it’s still a spectacle. Michel definitely does an amazing job of capturing the power, beauty, and raw athleticism that makes professional wrestling so near and dear to all of us.

GP: As a diehard, lifelong wrestling and comics fan, that’s music to my ears. You mentioned starting Mike Hartmann’s journey at the beginning, but I understand “The Last Territory” isn’t the beginning of his tale. Do readers need to read Mike’s previous adventures to get what’s going on in the new book? Also, tell us a little bit about Mike as a character. What makes him tick?

MK: We have a previous collected edition titled “Headlocked: A Single Step,” which covers Mike’s initial decision to become a wrestler and his first attempt to try out for wrestling school. It’s not necessary to following and enjoying “The Last Territory.” As an independent, I’m always aware of the idea that someone may be jumping on at any given point so I’m very conscious of the accessibility of whatever story I’m telling. With that being said, it’s still a good read and a lot of people have dug it…so check it out!  Cheap plug: You can get “A Single Step” through our website and it’s also included in several reward tiers through our Kickstarter. *Thumbs up, Mick Foley style!*

As for Mike Hartmann’s character and what makes him tick…well that’s really what the story is all about. Headlocked is Mike’s coming-of-age story and fortunately, or unfortunately depending on the circumstances, he’s chosen to do that in the most insane environment possible. One of the prevailing themes in Headlocked is about identity and how we decide who we are and what we present to the world. Of course in the wrestling business, you can explore that both as a person and as a character, and we’re going to have a lot of fun examining that.

GP: Like many kids, you grew up a fan of both wrestling and comics. Likewise, comic pros have expressed their love for sports entertainment, while some of the biggest superstars in the wrestling world are diehard comic book fanatics. What is it about these two fields that seems to draw their fandoms together?

MK: I think there’s an argument to be made that wrestlers are the closest thing we have to real life superheroes. Colorful costumes, over-the-top characters, good vs. evil. It’s only natural that the two worlds would meld.

GP: With regards to the challenges of finding yourself in a business as wild as professional wrestling, did any wrestlers offer you advice or insight along the way?

MK: So far the story is completely my own. I’ve spent a little time working out with some guys to get a feel for it and I’ve studied the business for most of my life. I’m sure there will come a time when I need insight or advice but, as of right now, that time hasn’t come.

GP: Are there any particular comics that influenced you, either with regard to your writing style or in Headlocked itself?

MK: “Concrete: Think Like A Mountain” was the comic book that made me want to be a writer. I had read X-Men and a few other superhero books pretty religiously for years and loved it but Paul Chadwick completely changed my mind about what comics could be. And although it came later, I think “Unknown Soldier” was the best comic book story I’ve read in the last twenty years.

GP: What about your favorite wrestling memories?

MK: I’ve been fortunate enough to have attended a lot of really amazing wrestling events — Survivor Series ‘97, Royal Rumble ‘92 and multiple WrestleMania events. My single favorite wrestling experience of all time was seeing Samoa Joe vs. Kenta Kobashi in 2005 for (Ring of Honor). I can’t explain to you the energy that was in that building that night but I would put the 1,500 fans in that building up against any crowd ever.

GP: How do you approach the world-building aspect of something with a large scope like Headlocked? How do you go about capturing the many colorful personalities one might find in professional wrestling?

MK: The world-building aspect of Headlocked is definitely tricky. Obviously since the book follows Mike Hartmann’s journey, we only get to see what he sees. But we’ve done a few short stories in our convention books to flesh out some corners of the universe and that’s actually the types of stories that Shane, Rob, and Chris will be contributing to “The Last Territory.”

GP: How far do you see the ultimate story of Headlocked going? Does it have a finite end, in your mind, or is it a story that could continue for years with new twists and turns?

MK: I definitely have an end in mind for Hartmann. As for story length? I could end it tomorrow or I could tell it for the next ten years. There are so many interesting place that you can take him and there are so many different things you can examine with wrestling. This really is my dream project.

GP: Is there anything we haven’t addressed that you’d like to add about the book, or a final pitch to comic fans who might not be as aware of wrestling?

MK: One thing I’d like folks to be aware of is that all of the wrestler-produced content is exclusive to backers of the Kickstarter as a reward to those who are helping us out when we need it the most. Aside from giving those supporters some really cool content, we think it’s going to make the book a bit of a collector’s item.

And finally, we’re really hoping to prove something with this Kickstarter. The money we are trying to raise is solely to fund the art, printing, and shipping costs. But beyond that, we’d like to make a statement that there is a market for good wrestling comics that treat wrestling and its fans with respect. I’ve heard a million reasons from retailers and publishers why they think wrestling comics can’t sell and I’d like to make a few of ‘em eat some crow!

GP: What is the timetable for the book’s completion? And how will fans be able to get a copy once the Kickstarter is completed if they weren’t able to contribute?

MK: The Kickstarter ends on Sept. 13, 2013. Our target for shipment is January 2014. The book in this incarnation is not available anywhere else but Kickstarter. I’ll be doing a separate edition without the wrestler generated content that they can get a cons and my website. I’m going to work on other forms of distribution once the Kickstarter is complete.

As of this publication, more than $17,000 has been contributed to the book’s Kickstarter fund.