Nick: Don’t check your calendars, loyal readers, because while it may be the first Monday of the month, this time out we’re forgoing Off the Page in favor of a special bonus edition of The Longbook Hunters!

That’s right. It’s been a while since we’ve gone out for a Longbook Hunt, but we figured it was time to dust off our rifles and other hunting-related analogies and take a look at a (somewhat) timely trade collection.

In this case, we decided to grab the first volume of the run that inspired this year’s biggest hit film — Dan Abnett and Andy Lanning’s Guardians of the Galaxy. 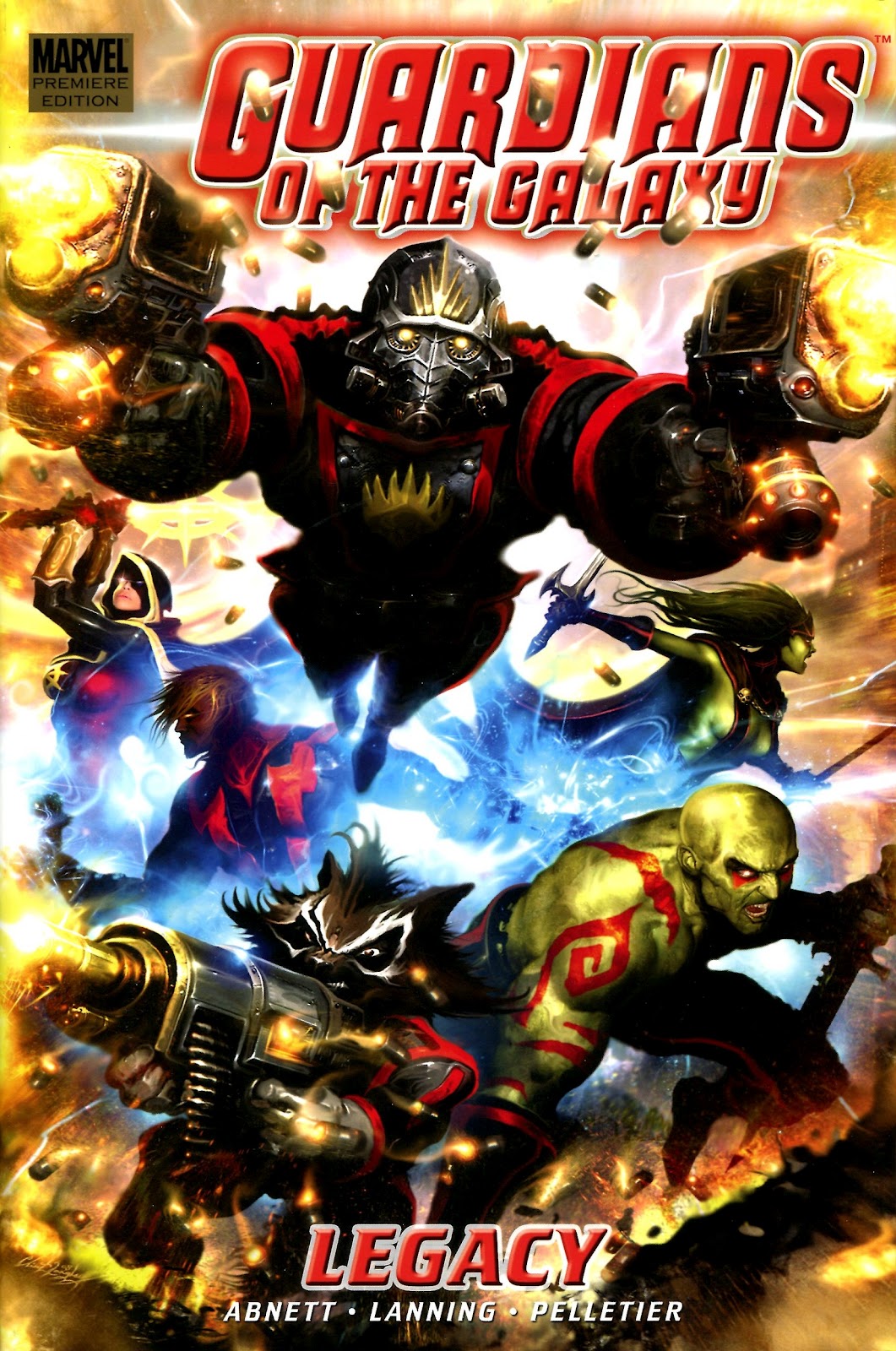 Nick: While this may be October, back in August the world was taken by storm by a little movie featuring a group of ragtag criminals and bounty hunters. That movie, of course, was Guardians of the Galaxy.

Greg: With art by Paul Pelletier (of Aquaman fame), “Legacy” was a complete renovation of the Guardians concept by the writing tandem of “DnA.” It introduced the team dynamic we saw on the big screen and followed on the heels of DnA’s well-regarded (though still unread by the Hard-Traveling Fanboys) cosmic Marvel books Annihilation and Annihilation Conquest.

Nick: DnA’s run has since been pointed to as the main reason for the resurgence in popularity for the Guardians and cosmic Marvel in general.

Greg: Indeed, Abnett and Lanning (who have been working together for years in both DC and Marvel) set about the task of rejuvenating the space-oriented side of Marvel that was once among its most popular lines. As an aside, Young Greg was always drawn more to the cosmic side of the Marvel Universe than anything short of the X-verse. I have wonderful memories of my friends and I recounting the Infinity saga and arguing about who would win a fair fight between Silver Surfer and Adam Warlock.

To say I am happy about the newfound resurgence in popularity for that particular genre would be an understatement. But with all that out of the way, let’s set the stage for “Legacy”: In the aftermath of two universe-threatening wars, a guilt-ridden Peter Quill (a.k.a. Star-Lord) decides the universe needs a team to protect it and prevent future wars from occurring. With the help of his buddies Richard “Nova” Rider and the mysterious telepath Mantis, Quill assembles a ragtag group of ex-outlaws, mercenaries and unstable heroes: the tank-like Drax the Destroyer, the dangerous Gamora, the newest female incarnation of Quasar (a star-hopping hero dating back decades), everyone’s favorite Bradley Cooper-voiced talking animal Rocket Raccoon, and the enigmatic and uber-powerful Adam Warlock (a.k.a. My Boy).

Nick: That’s right — all the major players from the movie are here, albeit with a few additions. I must say I wasn’t overly familiar with Quasar beforehand, and my only exposure to Adam Warlock came as part of the Infinity Gauntlet storyline.

Warlock in particular has always been a fairly big deal in the cosmic Marvel pantheon, so it was good to see him doing his thing in GotG.

And yes, Cosmo! What may sound ridiculous at first wound up beink one of my favorite aspekts of the book.

Sorry. Yes, Cosmo is a major factor in the book and quickly became one of my favorites. I especially loved his contentious relationship with Rocket, who is immediately distrustful of Cosmo. There’s nothing quite like a dog and a raccoon trading insults.

But Cosmo acts as the head of security for Knowhere, a farflung space locale that acts as the base of operations for the Guardians, and subsequently is the setting for a large portion of the book.

Greg: Indeed. Much of the book is constructed cinematically in a nonlinear fashion. We get flashes of the characters in the present as they discuss the events that happened in the near past. We’re shown those past events interspersed with each character’s (often differing) takes on what exactly happened. It makes for an intriguing dynamic and serves to establish the characters’ personalities. While the initial villains, the Universal Church of Truth (no relation to the R variety of truth, I think), weren’t the most intriguing (perhaps because I’m so familiar with other spacefearing religious zealot groups in comics), the main characters and their relationship dynamics were instantly interesting.

Nick: Yes, in my view, the Church was just a token threat to give DnA an excuse to get into those aforementioned flashbacks on what happened, thus allowing readers to get to know the Guardians and their similarities and differences a bit quicker. The good thing, though, is that in addition to providing a solid foundation for the book to build upon, this early segment involving the Church doesn’t last all THAT long.

Greg: Yeah, the first couple chapters are essentially setup issues designed to let us know who these characters are and why they’re teaming. Unfortunately, the effect was a little underwhelming from a story standpoint early on. After hearing so much hype for the book, and after loving the movie, I was a tad disappointed with the early chapters.

Luckily, that wouldn’t last long, as the book found its footing once the team was established and able to have some of its own adventures and mysteries. Those adventures include an encounter with a time-displaced Vance Astrovik from the 1970s incarnation of the Guardians, an apparent double-cross by a member of the team, and a pretty great tie-in to the “Secret Invasion” event.

Nick: Yes, once the Church bit was wrapped up and the Guardians were officially formed, we were on to the next story. And the next story, for someone not very versed in the ways of cosmic Marvel, was a bit convoluted.

You see, the Guardians now known the world over weren’t the original incarnation of the team. No, the original Guardians were a team from the farflung future. Vance Astro, who Greg just mentioned, was the apparent leader of that team.

And while Secret Invasion wasn’t the greatest event ever, this was a pretty good example of a tie-in done right. It added to the greater SE event, yet could completely stand on its own merits if you have no knowledge of that story.

Greg: I’d go so far as to say it’s probably the best thing to come out of that event. It was crisply paced, suspenseful and had a twist that actually made me stop and think.

I’m not sure about you, Nick, but I definitely think “Legacy” picked up the pace with each issue. As the book found its footing, I gradually became invested.

Nick: Easily. The book, thanks to overwhelmingly positive reviews and how much I enjoyed the movie, had some pretty unrealistic expectations to live up to. I think once I realized there was no way it could be as good as it had been sold to me, I was able to enjoy it on its own merits.

One other thing I’ll say is that if you come in expecting something tonally similar to the movie, be warned that while comedy certainly plays a role in the book, it isn’t nearly as humor-based as the movie.

Greg: Great point, and one we need to address. I was certainly expecting something along the lines of the movie, and I think that’s part of what took me so long to get engaged in the story. There are some great comedic bits — mostly from Rocket and Cosmo, but also occasionally from Star-Lord and Gamora — but it’s much more of an action book than a humor book. There’s a lot of political intrigue, Geoff Johns-like background mysteries and space action, but not as many wisecracks and laugh-out-loud moments.

I was also surprised by a few of the characters. While Star-Lord and Rocket are largely similar to their big-screen counterparts (interestingly, Rocket is funnier in the comic than on screen, while Star-Lord is more serious in the book than on screen), I was struck by some of the differences in Gamora and especially Drax. Gamora is much more rough around the edges here, with a less overtly “good” personality. Whereas Dave Bautista’s portrayal of Drax had us rolling in the floors at the movie theater, the Drax of the book is a kind of generic, stoic badass. His was the only character that really disappointed me in the book, though he had some big moments near the end. It took me a while to get used to this different portrayal, as I came in expecting the aloof alien warrior who doesn’t understand metaphor and enjoys getting drunk with anthropomorphic teammates.

Nick: Yes, I almost wish I had come into the book fresh, as it’s hard to get the impressions of the movie out of my mind. As Greg said, some of the differences are pretty vast.

Star-Lord’s more serious angle worked for me, as it made sense that the team would follow this man who clearly had a sense of responsibility and honor, rather than the rather dubious character from the film.

And Gamora, I honestly found far more interesting than her film counterpart. Here, I had no idea what exactly she might do next, which always kept me on the edge of my seat. And as my counterpart said, movie Drax is approximately 100 times more interesting and entertaining than comic Drax, at least in this volume.

Greg: That brings us near the end of this particular Longbook Hunt, and it leaves us with two key questions to answer: Would you recommend this book to new readers? And are you interested in reading future volumes? What say you, Nick?

Nick: I would recommend the volume, albeit with the caveats we mentioned previously — try to come in with a blank slate, rather than expecting a carbon copy of the movie’s tone, characterizations and structure.

But, once you get past those caveats and dive into the book, you become increasingly drawn into the story being told and how the characters interact, making future volumes an extremely tantalizing proposition.

What about you, Greg?

Greg: I’d have to agree. This is one of the few editions of this column where neither of us had read the book before this reading. As such, it’s interesting that our reactions were largely the same. And like you, I’m interested in continuing the DnA run and seeing what they have in store for these characters.

With that, we bid you adieu. Remember to check in with us next week for Countdown and then again in two weeks when we come back with a SECOND Longbook Hunters for October. This time, we’ll be delving into one of my favorite books from the New 52: All-Star Western.

Greg: We’ll also accept faxes, but you have to figure out the number.