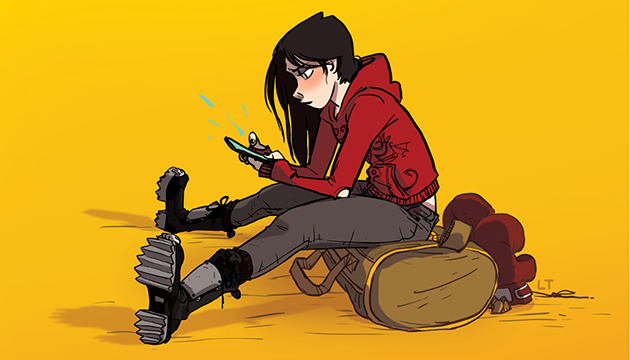 The comic book medium can be intimidating to newcomers and veterans alike. Frequent reboots, crossover events and long, confusing back stories can scare even the most seasoned of readers. After his fandom waned, this author strayed away from the popular press of the comic book world, looking to find stand-alone stories, hidden gems and books slightly to the left of the mainstream.

I have always been intrigued by slice-of-life and coming-of-age stories, especially when the creators put a unique spin on the concept. In the world of mainstream comics, where spandex and capes are the norm, it can be difficult to find a story that fits one of the aforementioned narratives and nearly impossible to hit one that fits both attributes.

When I returned to the world of comics, I started to seek out the independent publishers listed in Previews in the hope of finding original books that fit these genres. Exploring titles like Adrian Tomine’s Optic Nerve and Sean McKeever’s The Waiting Place served as niche books that counteracted my pile of unread Spider-Man and Flash books. These days, the larger publishers realized that they need to appeal to a wider audience that is now interested in comics. Boom Studios, a company I lovingly refer to as a “mid-major,” noticed this opportunity over ten years ago. Its “Boom Box” imprint, started in 2013, allowed creators to publish “experimental content,” the most known of which is the teen and young adult juggernaut Lumberjanes. However, my pick for the gem of the imprint, and perhaps my favorite comic on the market right now, is the college romp Giant Days.

Originally drafted as a mini-series, Giant Days focuses on a trio of friends that meet at an English university. The book, written by John Allison, initially centered around Susan, a self-described feminist trying, like all young adults of this age, to figure out her ultimate identity. As the series progresses, roommate Daisy (a book-ish introvert ready to break through her shell) and Esther play more of a role in the main plot. Esther, a cross between a fashionista and an English goth in a post-emo world, particularly intrigues the reader, a character who, according to Daisy in issue #15, has an enormous ego that is incredibly fragile, ultimately, a solid description of many college students.

Despite having two different artists, Lissa Treimann and Max Sarin, over its fifteen-issue run, the look and feel of the book never changed. In fact, upon reading the cover on the most recent issue, I didn’t even notice the change. The pencils and colors stand out, like the plot, from a typical super-hero book, almost cartoon-like in its presentation. Despite this, and the general mirth of the story, one can easily relate with every character, their motivations and their actions, making it a rare gem in the comic industry.

Though it started under the radar, the creators’ peers took notice of Giant Days‘ high quality, nominating it for the Best Continuing Series and Allison as Best Writer. Hopefully, this recognition will help the book find a larger audience. Some critics unfairly brand the book as targeted toward women, which on some level may be true, but this commentary does a grave disservice to potential readers. This book targets anyone who enjoys true-to-life stories with a humorous edge, Anglophiles and, really, anyone who experienced the joys and angst of living on a college campus.

You can find Giant Days at your local comic book store or for online purchase at Amazon.