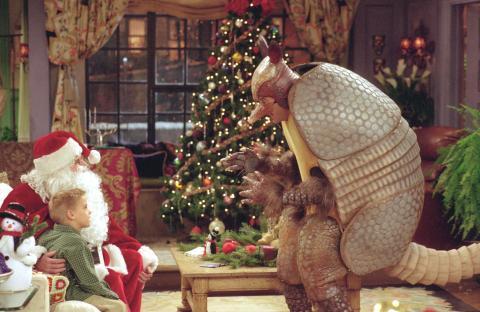 “Years and Years ago, there were these people called the Maccabees…”

Ross has to utter that phrase three times before finally getting the opportunity to tell his son Ben about Chanukah. The interruptions were always amusing, Ben singing ‘Jingle Bells’ over Ross’s story, Chandler walking in on the story whilst wearing a Santa costume and stealing Ross’s holiday thunder, and Joey barging in wearing a Superman costume.

Ross attempting to teach Ben about Chanukah is the A storyline of the episode, and by far the funniest. The whole scene with Chandler and Ross in full Santa and Armadillo costumes, respectively, is pretty hilarious. It brings us the funniest lines of the episode:

Ross: What are you doing here, Santa?

Chandler: Well, I’m here to see my old buddy Ben. What are you doing here, weird…turtle-man?

Ross: I’m the Holiday Armadillo, your part-Jewish friend. You sent me here to give Ben some presents. Remember?

Chandler: Because, if Santa and the Holiday…Armadillo? (Ross nods) …are ever in the same room for too long the universe will implode. Merry Christmas!

And possibly my personal favorite,

Ross: That’s right, and that’s why we celebrate Hanukkah today. The end.

Chandler: My favorite part was when Superman flew all the Jews out of Egypt. (Glaring at Joey who’s nodding.)

Ross: The Armadillo was actually not so thrilled about that part!

The B Storyline involves Phoebe and Rachel. Their apartment, which had recently been ravaged by a fire, is now ready for the girls to move back into it. Chandler and Monica, however, make Phoebe feel like Rachel may not want to move back in with Phoebe, because she is having so much fun living with Joey. This prompts Phoebe to try to drive Rachel out of Joey’s apartment, by buying Joey annoying/frightening gifts, such as a drum set and a tarantula. This scheme backfires, however, because Rachel likes both gifts. When Phoebe comes clean about her intentions, Rachel makes it clear that although she likes living with Joey, she likes living with Phoebe more. Aw. So, Phoebe and Rachel go to check out the apartment, which has unexpectedly been remodeled into a one bedroom, that Phoebe decides she wants to live in alone, so Rachel agrees and continues to live with joey.

The C storyline centers around Chandler and Monica, to be more exact, Chandler’s inability to tip/bribe the host at a fancy restaurant. He spends the entire episode trying to smoothly slip money into people’s hands. He just can’t do it!

As an aside, I’d also like to mention that season 7 Rachel’s hair, is my favorite. Actually, I am a fan of everyone’s hair that season, but Rachel’s season 7 hair is way better than her world famous season 2 coif.