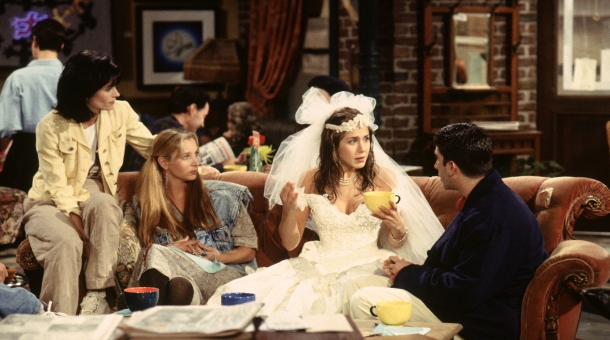 Friday with Friends: Season One, Episode One –The Pilot, or The One Where it all Began

Friends debuted on September 22, 1994. I was ten years old, and addicted within the first episode. Every couple years or so, I dust off my DVD collection of the series, and watch the whole thing through. In disbelief that it is the 20th anniversary of when it all started, I got a little sentimental, started thinking about my favorite fictional sextet, even doing a little personal life comparison. I’m 30 now, what were Rachel and Phoebe doing at 30? They didn’t seem to have things figured out yet, so it’s totally OK that I don’t. Phew. Still time. Anyway, in honor of the Central Perk Six—I don’t believe anyone has ever called them that, or ever should again—I’d like to celebrate my love of one of the best sitcoms ever by showcasing some of the good and not so good moments, analyzing whether or not the shows plots and themes stand the test of time, and getting to the bottom of what was going on with Joey’s hair in season one. So take a seat Seinfeld, because we’re fixing to talk about something.

The episode centered around three big events: 1. Rachel leaving Barry at the altar. 2. Ross trying to move on after his divorce to Carol 3. Monica going on a big first date

Absolutely. Not only did I still find every joke amusing, but all of the storylines still apply. Rachel freaks out and leaves her groom at the altar. She realizes she can’t marry Barry because she doesn’t love him, and that it is time for her to grow up and get her own life. Break-ups and the newly single girl taking on the city is always relatable. Fresh independence reigns supreme.

Ross is similarly going through a break-up, not similarly is that he has just divorced his wife…because she realized she was a lesbian. What a twist!

The third, and most controversial storyline, according to NBC execs, is Monica going on a first date with Paul the Wine Guy. The controversy back in 1994 was that Monica would come off as unlikeable and a slut if she slept with a guy on the first date. OK NBC. There is more of a chance that Monica came off as unlikeable because she was wearing suspenders when she opened the door to go on that first date, even way back in super conservative 1994.

Anyway, the more important point of Monica’s tale, sleazy wine guy dupes doe-eyed chef, is still totally relevant. There will always be those not so nice guys with a line or two on reserve, and those sweet naive girls who will sleep with them.

Funniest line of the episode is uttered by Chandler of course, as he leaves for work.

Chandler: “If I don’t input those numbers…doesn’t make much of a difference.”

Most iconic line comes from Ross at the end of the episode when Monica catches him leaving her apartment on cloud nine. It’s such a nice moment, because it is the first time Ross seems to be OK about his divorce, and has begun to move on. He’s ready for Rachel.

Ross: “I just grabbed a spoon.”