Batman v Superman is out this weekend, but you might be wondering what kind of history these two characters have together. In short: plenty!

So which of those stories should you read in order to help you better understand some of the conflict and comradery between these two DC Comics icons? Here are my Top Five picks that you’ll want to check out before (or maybe after) you see Batman v Superman: Dawn of Justice. 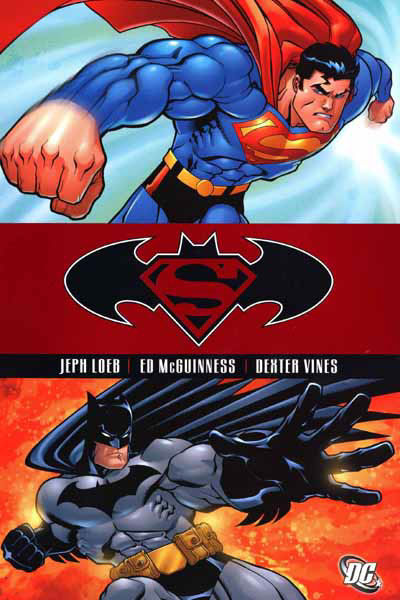 Sure, it’s more of a team-up story than one that highlights the conflict between the two, but you won’t find a better illustration of why Superman and Batman work so well together. The inner monologues run juxtaposed to one another and show that while the two have their differences, they are far more alike than either might care to admit. It shows that they have differing methods, but they recognize the same problems and find ways to work together in order to solve them.

The central conflict in this story arises when President Lex Luthor (yes, he’s President of the United States in this story and no you don’t need any more back story than that), claims that a giant Kryptonite meteor headed for Earth is only coming because of Superman. A warrant for the Man of Steel’s arrest is issued, but Batman knows better than to trust anything Luthor says. The Justice League is split down the middle and a massive conflict between heroes happens. Not to mention a bunch of villains jumping into the fray to try and collect a $1 billion bounty on Superman’s head, placed by Luthor.

Its plot is not terribly thick, but the character drama and interaction are some of the best you’ll find in any comic story from any era. Superman and Batman do have some minor conflicting ideas, but this story is one that will illustrate to you why these two are meant to work together, despite any differences they may have. 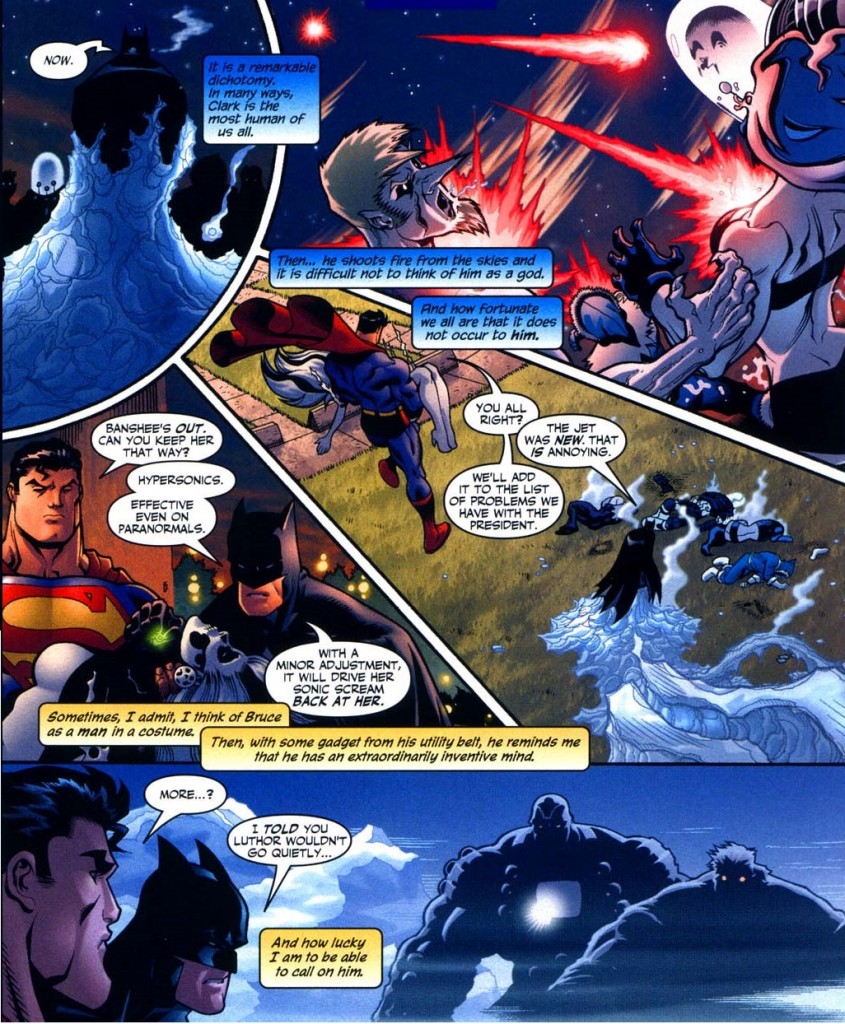 Superman and Batman ultimately working together in the film could easily take some cues from this story. It also illustrates some of the ulterior motives of Lex Luthor and his lust for power more so than money. These character moments will likely translate over to the screen in a way that builds from conflict to resolution to at least a shaky alliance once the heroes realize who the true villains are. 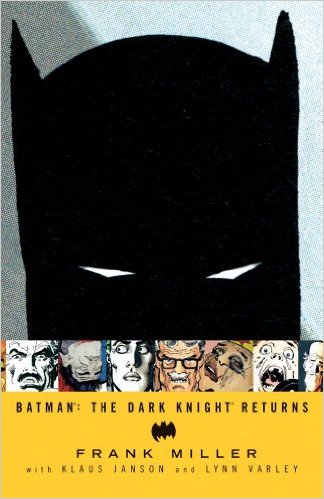 The Dark Knight Returns by Frank Miller and Klaus Janson

Of course this is on the list, how could it not be? For the uninitiated, this self-contained, out-of-continuity story takes place in a distant, dystopian future where Batman has retired due to age/health and Gotham City hasn’t exactly faired all that well in his absence.

There’s a gang calling themselves The Mutants who essentially run the streets. Harvey Dent, seemingly cured of his split personality following a Bruce Wayne-funded facial reconstruction surgery, goes off the deep end and holds Gotham hostage. And Bruce can’t take any more of this as the police are clearly overwhelmed. He dons the cape and cowl again, returning as Batman after 10 years of retirement.

He’s effective, but not without consequences. Joker, who’s been in a near catatonic state since Batman quit, gets that old spring in his step upon seeing his rival return. Chaos begins to unfold as Batman confronts both The Mutants’ leader and some of his old foes. Superman is called in by the US government to try and reign in a vigilante who eventually comes to run Gotham City using a private army of former gang members. 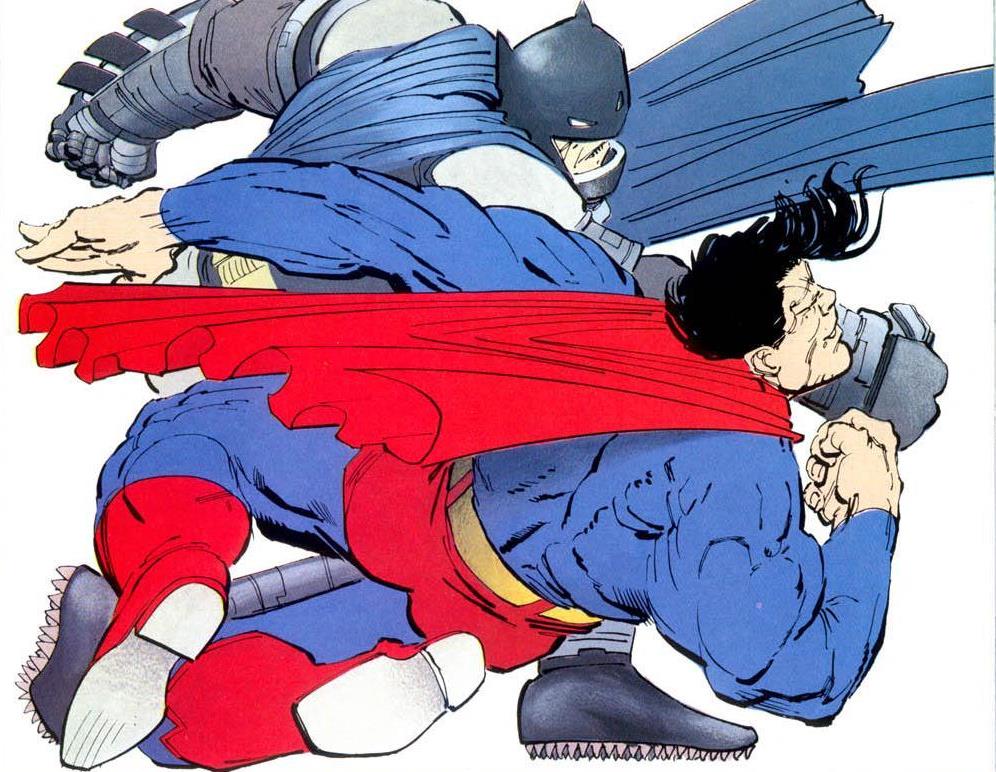 The conflict between Superman and Batman here is one of ideology that ultimately comes to blows. Neither side is wrong, but neither is completely in the right, either. Moral ambiguity is a theme that runs in this story, though Frank Miller does tend to lean heavy toward Batman in many instances. The big fight scene between Superman and Batman in this story is a major influence on the physical confrontation the two have in Batman v Superman: Dawn of Justice. The circumstances are different, but this story has many points that highlight why Batman approaches things the way he does and since it’s told from his perspective, you’ll see Superman as this version of Batman sees him: as someone who wields a lot of power, but is often too naïve for his own good and has to be shown he can be beaten from time to time.

If ever there was a version of Batman that has influenced so many different takes on the character, it’s this one. Lines from this story might even wind up used in the film, too. 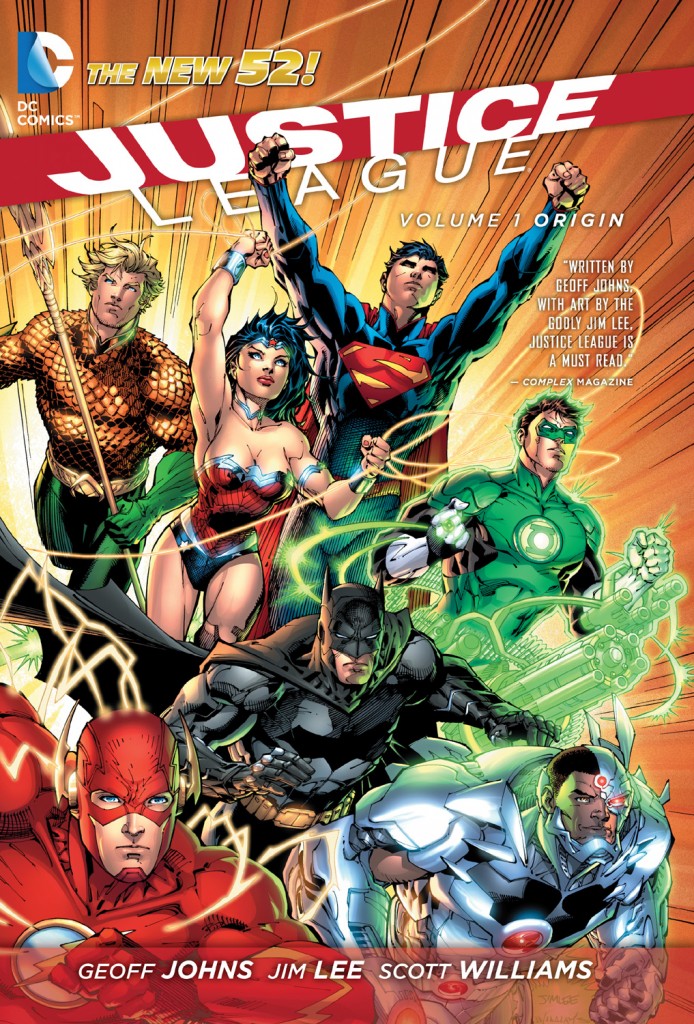 It’s right there in the title “Dawn of Justice,” so you know Justice League is coming. It starts filming next month. So, how might the team come together on film? Well, this comic has a few ideas that might be mined for the translation. And this 2011 Justice League reboot (part of DC’s New 52) is a great place to see a modern JL come together.

An invasion is coming from another dimension, and Earth’s separate, but very powerful, heroes have to come together to fight it. While the plot isn’t so groundbreaking, there are some perfectly written character moments (Wonder Woman steals all the scenes and anytime Johns writes Hal Jordan/Green Lantern, it’s a must-read) and the action is as fast-paced and fun as you could hope for in a superhero comic. It’s hard for Jim Lee not to turn out something incredible when he’s on pencils. And the first meeting of Batman and Superman here is a battle The Dark Knight was not fully prepared for. Neither realizes the other isn’t a threat at first so they both kind of rush to judgement and decide to go on the offensive. Batman is in no way a match for Superman in this scenario and Superman even seems to move much slower when he realizes Batman isn’t really capable of beating him. Although Batman does have one major surprise up his sleeve that brings everything to a halt. 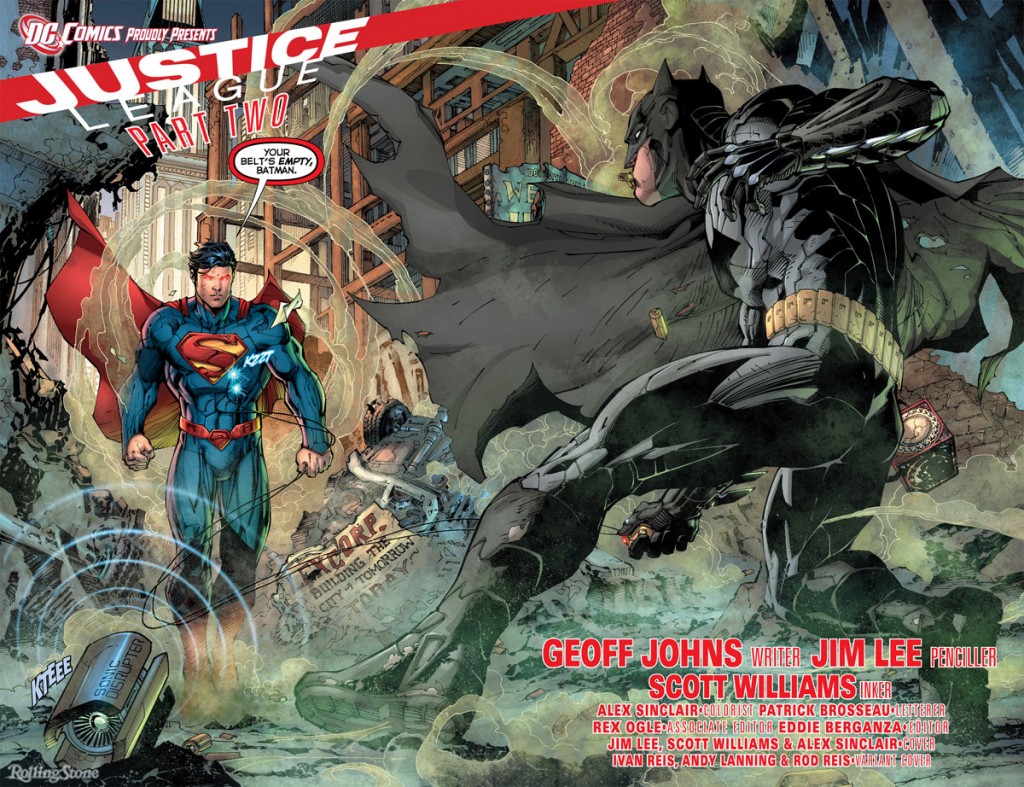 This story is likely to have had some influence on how Batman v Superman’s conflict plays out between the two heroes. Ultimately, it’s obvious the two will come together (along with Wonder Woman) to take on a bigger threat (Doomsday and Lex) and bring the heroes of Earth together. Justice League: Origin will give you some valuable insight into the team dynamics and how each fits into the larger whole. Not to mention, this is also the origin story for Vic Stone/Cyborg in the modern era and he’s got a small role in Batman v Superman, too, so you’ll likely want to check it out for that, as well. 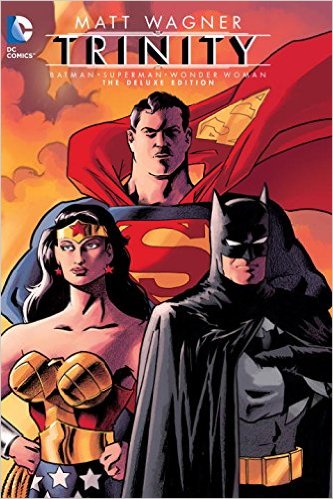 If ever there was a comic that seemed to parallel some of the finer story points of Batman v Superman, it might be this one. Where Lex Luthor and Doomsday/Zod are the antagonist of the film, Ra’s al Ghul, Bizarro and Artemis team up to wreak havoc throughout the world by dismantling communications satellites, destroying the world’s oil supply and ultimately dropping a nuke on Gotham and invading Themyscira in order to free the planet from the tyranny of man. Ra’s is portrayed as more of an eco-terrorist in this incarnation.

The biggest take-away from this story is the differing world views of Superman, Batman and Wonder Woman. Each has their own way of doing things and it often bumps up against the other’s methodology. Wonder Woman and Batman nearly come to blows over the interrogation of a member of “The Purge,” when trying to figure out where Ra’s is hiding out. Batman breaks the guy’s jaw even after Diana is able to get answers using non-violent methods (her lasso of truth). Superman attempts to play peace-maker, but it takes a while for them all to finally come together. Batman’s crush on Wonder Woman later is more than a little evident, too.

Expect to see the three heroes questioning each other’s methods in the film and ultimately realizing they complement each other instead of hindering. However, it’s more likely that Wonder Woman will be the one playing peace maker to the two male heroes’ conflicts with each other. 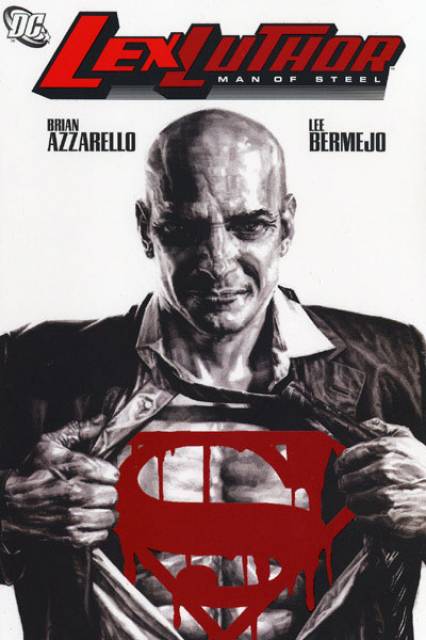 Is Lex truly evil all the way through or is it a matter of perspective? That’s the big question posed by this limited, out-of-continuity series. We see a side of Lex most comics have never bothered to explore: the generous side. He even goes out of his way to help someone who most would think he’d see as beneath him. And he likely does, but even Lex is still human.

What’s even more interesting is getting to see heroes like Superman and Batman from Luthor’s point of view. He illustrates the duplicitous nature of hiding behind a mask and pretending to be heroic only when it suits them best. But if the chips were really down, they’d be like everyone else but without nearly the same amount of intelligence and capability as himself. He sees Superman as the biggest threat of them all. An alien who looks human and therefore people seem to trust him. But what if he ever decided he wanted to rule humanity? Who could stop him?

Lex is shown as a master manipulator in this story, too. He gifts Bruce Wayne a piece of kryptonite while convincing him that Superman is the greatest threat humanity has ever known. Unfortunately for Batman, he doesn’t take into account Superman’s super breath ability and loses the piece of kryptonite before the fight between them ever truly begins. Superman wins easily when Batman doesn’t have a ton of experience or battle armor on his side. 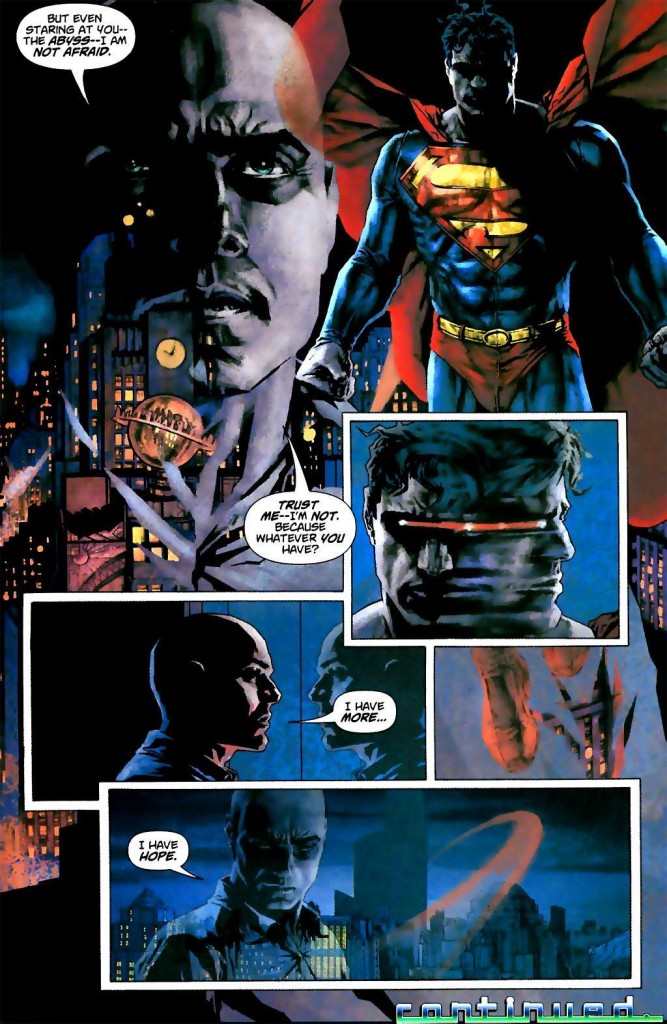 This is a piece that has likely influenced the film’s take on Luthor in a few ways. While Jesse Eisenberg’s performance will differ from any conventional take on the character, his keen mind and ability to hide his true self until he’s ready for it to be seen will likely come almost straight off the page. And he’s likely to be the mastermind behind pitting Superman and Batman against one another, so this will give some context to their conflict in the film from an outsider perspective.

There you have it, the Top Five comics you should read before or right after you watch Batman v Superman: Dawn of Justice. Don’t forget, the movie opens March 25 everywhere and you can find a review of the movie by me right here on Place To Be Nation that morning.