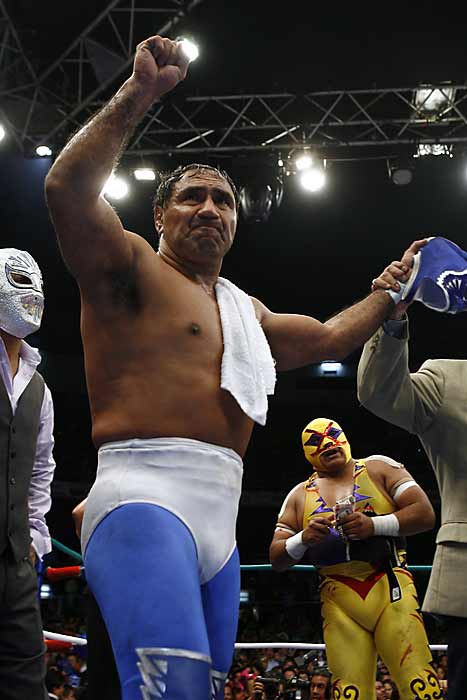 The critical moment of “Mad Men” season six and really the whole series overall occurs in the season finale when Don Draper gives a speech to Hershey executives and reveals Dick Whitman (his true identity) to them in a symbolic story about his childhood.  The viewer had known since season one that Dick Whitman had assumed the identity of Don Draper coming back from the Korean War but this felt like a watershed moment in the show where Don could truly be himself for the first time in a workplace environment.  Don in the ending scene, shows his children the whorehouse that he grew up in and has a sense of embarrassment but pride at this crucial moment in his life.

That unlikely balance between embarrassment and pride is what makes apuesta (bet) matches in lucha libre so spectacular and gut wrenching to watch.  These matches mean more to the combatants than just winning and losing.  Even titles come and go in a lifetime.  Losing your mask and having your identity revealed only happens once.  Having your head shaved by your opponent in the middle of the ring is an emotional rollercoaster that is carried for a lifetime.  CMLL (Consejo Mundial de Lucha Libre) is the oldest pro wrestling promotion still currently in existence.  Their 80th anniversary card will take place this Friday highlighted by two apuesta matches.  All signs point to this card being one of the biggest events in historic lucha libre history.

The Blue Panther vs. Averno hair vs. hair match should be a heated affair that has potential to kickstart a long running feud into the next gear.  The main event of the show won’t be known until more than halfway through the evening.   Atlantis & Ultimo Guerrero face off with La Sombra & Volador Jr. in the fifth match on the card in a match entitled Relevos Suicidas.  This match features heated rivals teaming up for one sole purpose: To win this tag match and main event the show in a mask vs. mask match against each other.  Someone’s identity will be revealed and all four participants have arguments that can be made for or against them as to why they will be the one losing their mask on Friday night. 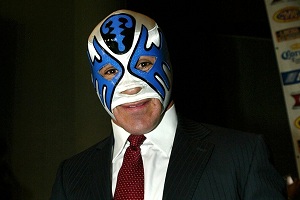 Atlantis will be celebrating his 51st birthday in two weeks.  A grizzled maestro of both the ring and apuesta matches; Atlantis has accomplished everything in his career and been a main event level star in CMLL for 20 years.  While never really being the top star in the promotion, Atlantis has been a loyal stalwart within CMLL and has been a key integral part in some hugely important matches.  Shockingly, Friday night may not even be the most important match Atlantis will compete in his career.  He wrestled Villano III on March 17, 2000 in an apuestas match that won the Wrestling Observer Newsletter Match of the Year.  That was the only time a lucha libre match has won that award.  It is also one of the five biggest matches in lucha libre history and a climatic journey where the winner was in doubt up until the final pinfall (honestly fairly rare in apuesta matches).  Atlantis would be my third choice to lose his mask on Friday night.  Atlantis losing his mask would be a true historic moment sending shockwaves through the wrestling world.

Ultimo Guerrero is not as tenured as Atlantis but is still a wily veteran that has been around CMLL for 15 years.  Ultimo Guerrero also has the distinction of working as a rudo almost exclusively throughout his career.  He formed a successful tag team with Rey Buccanero and Atlantis throughout the 2000s but he also has achieved some success in singles competition against Mistico in addition to taking Villano V’s mask as revenge for Villano defeating Blue Panther to take his mask at the CMLL 75th anniversary show in 2008.  Now the former tag champs (Guerrero and Atlantis) are locked in a bitter feud that apparently won’t end until one of them is unmasked.  Guerrero is also an integral part behind the scenes in the booking aspect of CMLL.  If I had to wager a guess, I would say Guerrero would be my choice to be unmasked on Friday.  The unmasking would not be as newsworthy and historic as Atlantis being unmasked, but still a momentous event worthy of the climax of the 80th anniversary show.

At the ripe age of 23, La Sombra is certainly the future on the horizon of CMLL.  Amazingly, he is already been in CMLL for the past six years and has been poised and built to become the major face of the promotion once Mistico left for WWE.  La Sombra was featured in some high profile matches with the likes of Negro Casas and Shinsuke Nakamura.  His apuestas record is brief at this age but very impressive as he took Felino’s (brother of Negro Casas) mask.  He also defeated Olimpico at last year’s anniversary show when they were the final two men remaining in a multi-man cage match.  La Sombra seems on the surface to be the least likely at losing his mask since he is only beginning to reach his peak and could be the integral star in CMLL for years to come.  The only slight wildcard in this equation is if somehow WWE has signed La Sombra and he will be losing his mask on his way out of the promotion.  There has at least been some mild interest shown in La Sombra before by WWE.  This does seem highly unlikely though at this juncture and I would be shocked to see Sombra unmasked on Friday. 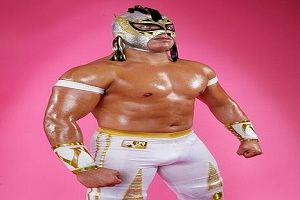 For years Negro Casas was the natural foil for El Hijo Del Santo.  It seemed destined that Mistico and Volador Jr. would follow this same path and be the two building pillars of CMLL.  Then suddenly, Mistico signed with WWE and Voladar Jr. sputtered for a couple of years.  Volador’s heel turn was an enormous success but once Mistico left, Volador seemed directionless.  Starting into a program with Mr. Niebla as a reluctant tecnico didn’t help Volador elevate his legacy following Mistico’s departure.  Now at the not so raw and young age of 31, it is time for Volador to really decide what he wants to accomplish as a wrestler and what his legacy will entail.  The feud with La Sombra has revitalized Volador and is a good stepping stone of his future within the company.  Volador’s apuestas record is weaker than any of the other combatants in the match.  Many lucha experts are thinking that a rudo almost certainly will lose their mask at the show.  Steve Sims, in a podcast on F4Wonline.com this week, indicated that Voladaor and his dad (wrestler Super Parka) have been trying to raise their financial situation.  This gives fuel to the fire that Volador would lose his mask and receive a hefty payoff as a result.  Lucha expert Kris Zellner stated that Volador Jr. was the safe and likely choice to lose.  I still think I lean more towards Ultimo Guerrero losing based on the fact that it will be a bigger news item for the 80th anniversary.

Each of these four individuals has a road that has led them to Friday night.  Each one is also at different paths.  Atlantis as the true legend of the sport, La Sombra as the clear future and face of the promotion, Ultimo Guerrero as the ultimate foil seeking his biggest victory, and Volador Jr. at the crossroads of his career with a shot of redemption.  Thinking back to the first paragraph and the emotions of pain and embarrassment and remembering previous unmaskings in lucha history, numerous emotions of my own are conjured up.  In my own personal life, I think back to times of my biggest embarrassments.  Tons of emotions rush through in those instances of grief and shame but never once pride.  That is what makes an unmasking in lucha so unique.  You have just suffered the most terrible defeat of your career and must relinquish the one thing you have striven to protect throughout: your identity and persona.  Yet in this moment, much like the final sequence of “Mad Men”, an individual is able to regroup and have a sense of pride and accomplishment of what they have become and reflect back on their career as a whole.  Usually the wrestlers are surrounded by their families for the unmasking and their official name and age is read, not entirely different from a prisoner being cleared of murder charges and released from prison.  This is a rebirth for the wrestler that rids themselves of the mask.  Blue Panther lost his mask in shocking fashion five years ago and has progressed and been featured in entirely new top programs including his hair vs. hair match on this show.  Losing the mask doesn’t ruin a career, but it does forever alter it.  This is why in a year where the Undertaker’s WrestleMania streak defense was never really in question, this is by far the biggest wrestling match that will take place in 2013.

I implore any wrestling fan to watch this show.  The show will be streamed for free on terra.com and should be on youtube immediately following that.  Any wrestling scholar should find something to appreciate in the presentation of the show regardless of whether you are a fan of the lucha style or not.  Like other forms of art, an appreciation for the craft being done well can be a driving force for entertainment.  At the end of the show, tears will most likely be shed by the wrestler that loses their mask, something that is a certainty.  No cop-out finishes need to be worried about.  A certain tragic occurrence will occur and primate emotions usually not reserved for wrestling will be fleshed out.  As a long term fan that can feel immune to many of the events that happen within the world of pro wrestling, these unique emotions and developments are what keep driving my interest and curiosities.  The wrestler that loses their mask will never be the same from a professional, and perhaps, personal sense, I will be forever changed as a wrestling fan and know at a bare minimum, that I witnessed wrestling history.