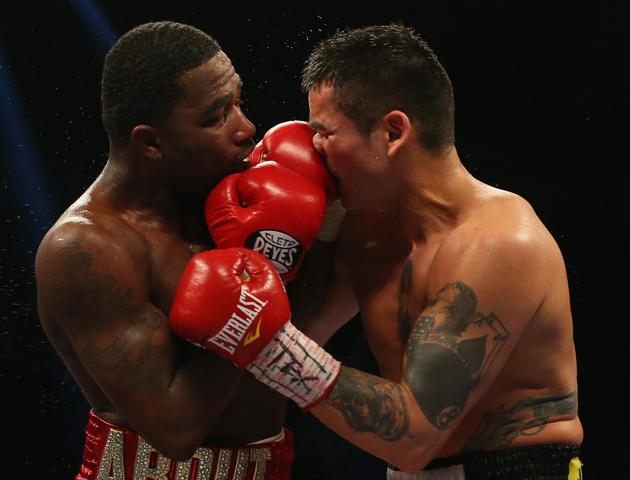 A unanimous decision was reached and the crowd started to buzz. The plastic crown that was probably bought at Party City an hour before the show was revealed in synch with Jimmy Lennon Jr. announcing a new WBA Welterweight Champion (the fact that I had to look up what belt was won is another issue). Marcos Maidana had solved the problem of Adrien Broner and handed him his first professional loss. In true school yard bully fashion, Broner treated this decision reading and loss by bolting to the back in a time that would turn eyes at the NFL combine. As he was showered down with drinks and curse words on his way to the back, the explosive and transcendent 2013 boxing season came to a close. All the hype that had surrounded Broner as he knocked out glorified scrubs on his way to the Paulie Malignaggi match seemed more like a mirage.

The Malignaggi match could have been an aberration. I had Broner winning that fight barely but he was badly exposed in his passive, inactive approach he took in fights where the action is pushed against him. Floyd Mayweather will always be a defensive genius first. However, like in any other professional sport, turning great defense into offense is a key for Mayweather’s success. His flurries that result from his opponents’ frustration are masterful and really show him having a handle on the fight. Broner has known shown a tendency in consecutive fights to turtle up and throw far significantly less punches than his opposition. The fight was taken to him right away on Saturday night. Maidana dropped him in the second round with a masterful left hook set up by a bevy of body punches he threw up to that point that mimicked the same beginning motion. Broner was wounded and could have possibly received a generous count to recover in adversity where seconds meant everything. He was visibly woozy throughout that round but was able to right the ship and make it out of the round. Maidana inexplicably went against the jab in the waning moments of the round making me ponder whether he had punched himself out to some degree in that flurry. That theory was put to rest with his output in the subsequent rounds. Broner was able to mix in more punches than in the onslaught of the first two rounds, but Maidana still was firmly controlling the fight overall.

The next big event in the fight occurred in the 8th round with another knockdown delivered by Maidana and a “headbutt” later in the round that he delivered as well. Broner had been consistently warned by Laurence Cole throughout the fight for shoving. Overall, Cole didn’t do a very good job refereeing this fight in my opinion. Mind games are a part of the Broner act but little things like him being directly in front of Maidana’s face at introductions and him giving some knees in the end of round one should have at worst been given a stern warning. Broner is a “give an inch, take a mile” fighter who will manipulate the referee any way he can and Cole fell victim to this. The headbutt situation is the most egregious example of this throughout the fight. Paulie Malignaggi in the post-match analysis said this was Broner’s “out” in the fight to get Maidana DQ’d. I agree with that assessment as Broner acted rocked from the headbutt that seemed to have very minimal impact. Nonetheless, Maidana was deducted a point and had to overcome some adversity of his own as now Broner was given another opening.

The final four rounds of the fight had Broner creeping in on some fight cards and I did give him three out of the last four rounds on my own personal card. I ended up with the fight 116-109 overall. Maidana had a tendency to punch himself out in later rounds but still looked fresh especially in the latter half of the final round. Broner should have been aware that he was trailing on the scorecards and yet was unable to swing for the fences and deliver that knockout blow.

The right person won much to the delight of the San Antonio audience. Broner refused any media interaction and that is where we stand heading into the 2014 boxing year. Some outpouring of support has come Broner’s way by the way of social media but this loss is a big blemish on his overall resume up to this point in his career and a steady rehabilitation effort is in order to bring Broner back up to the upper echelon of pound for pound boxers. The difference in the fight and in Broner’s whole demeanor is the concept of him living the gimmick. This is a just money-making strategy and certainly has made Broner an outlandish and unlikeable persona to most of boxing fans. Trash talking and constant showmanship are memorable but backing that up is what makes true boxing legends. Muhammad Ali had it and Floyd Mayweather currently displays it. Living the gimmick is one thing, BEING the gimmick is another. Whether Broner becomes a boxing legend or not is still up in the air, the most definitive thing that can be said about Saturday’s fight is that he ran away with his tail tucked between his legs and has to do more soul-searching going into the next fight instead of trash talking.