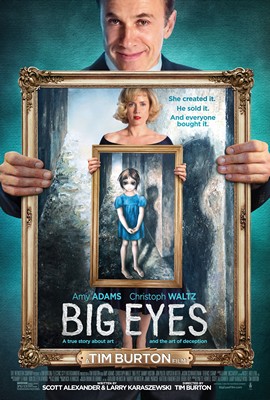 I have a well documented distaste for Tim Burton. His work is largely unoriginal and reeks of Johnny Depp/Helena Bonham Carter nepotism. The man directed a remake of his own movie for crying out loud. If you asked me, the last good movie that Burton helmed was Batman Returns in 1992…ok, Ed Wood was pretty good. That makes at least 20 years without a decent Tim Burton movie. I’m not exactly sure what compelled me to see another of his films, but I decided to give him one last chance.

In the late 1950’s artist Margaret Keane is painting her signature depictions of children with large eyes. However, her husband Walter receives all the credit for them as he believes people will be more receptive to a male artist. With her spirit broken, Margaret is at a loss for what to do.

After seeing Dark Shadows, my thoughts were that the only way Tim Burton can stay relevant is to mix up his style. That movie was a huge stinking pile of garbage and that’s because it wasn’t so much an adaptation of the television show, as much it was an excuse to instill a melee of Burton-isms. To my pleasant surprise, Tim Burton seems to have learned something.

Big Eyes isn’t the Hot Topic commercial that Burton has been making with his most recent movies. It’s more honest. The story is very well-crafted (of course it is based on a true story), telling us a strong tale of how women were kept down, and then they find their voice. It’s a strong feminist message, one that’s appropriate for our time (and any time). Burton hasn’t taken this opportunity to make it about him and his quirks, he respects the source material too much, and for that I commend him. There is a sequence involving the application of the “big eyes” to Margaret’s imagination, but it doesn’t feel out of place. It works in the sense of the character and the turmoil she is experiencing.

However, and no spoilers, the third act is a little cheesy. It gets a little out of hand with the actions that Walter chooses, and it kinda takes you out of it. But thankfully, this doesn’t last too long or ruin what came before.

Amy Adams has a wide range, one that can go from innocence to empowerment to depression as fast as shifting gears on a Pontiac. We feel the strength she puts into Margaret and we cry for her when she is being silenced. When she finally lets loose, it’s rewarding.

There will eventually come a day when I grow tired of Christoph Waltz. Today is not that day. He lures you in with his trademark charm, and you follow him for the most part without really knowing why. Even when he isn’t acting reasonably, you still go along with it, because damn that man is persuasive. He’s deliciously wicked, and that makes him all the more dangerous.

All in all, Big Eyes is Tim Burton’s best movie in 20 years. It has some minor issues, but it’s very strongly acted and told.