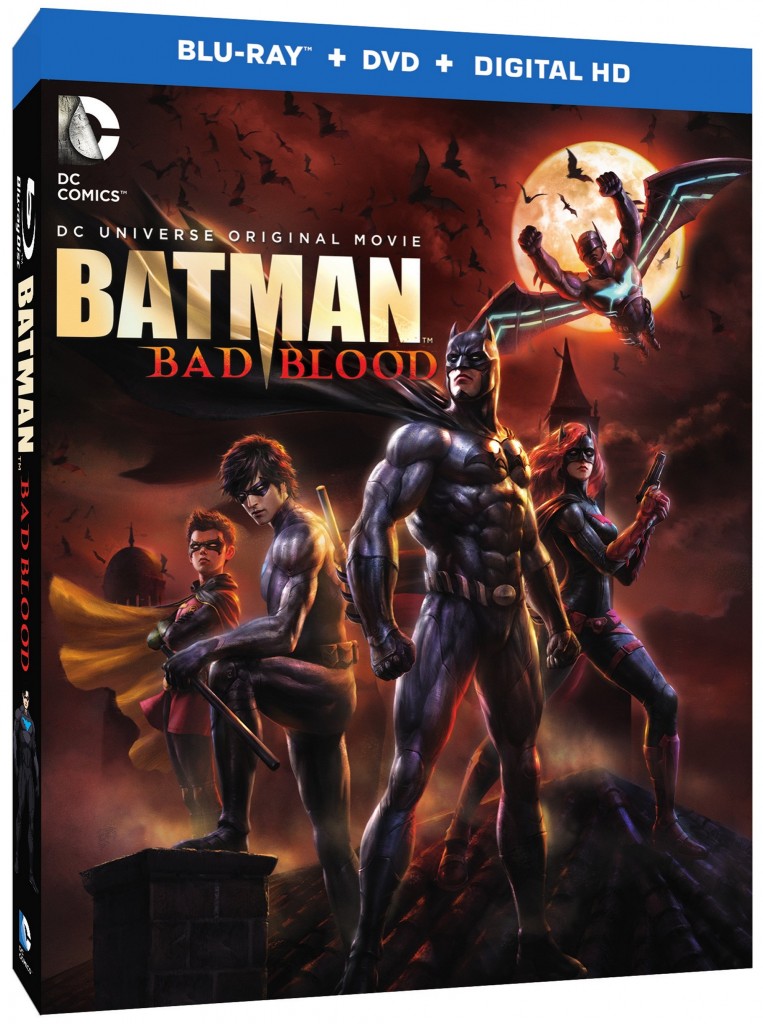 No, Taylor Swift didn’t make a Batman movie. No, the people who made this didn’t listen to her album and base a Batman movie around it. Though that might be an interesting concept piece…note to self…

What this movie actually is, however, is what I and my fellow PTBN cohort, Greg Phillips, have wanted to see for a long time: Dick Grayson taking over as Batman on film!

This film is a sequel to Batman vs Robin from last year, which was a loose adaptation of The Court of Owls story from Scott Snyder and Greg Capullo. While not a direct adaptation of any Batman comic story, this film does pull elements from several different ones.

Creating an original story can be tricky, but director Jay Oliva (Batman vs Robin, Justice League: The Flashpoint Paradox) and writer/comic book legend J. M. DeMatteis craft a story that illustrates the best parts of the Batman Family and brings some new players to the film series.

The basic plot is that a new villain has come to Gotham City, but nobody seems to know who he is or how he’s amassed so much power and influence so quickly. The film picks up after several months of tracking this new player has gone on and Batman is ready to make a move on him. Well…with the unrequested and unanticipated help of another new character: Batwoman!

The new villain is revealed to be Heretic, a gigantic hulking bad guy not unlike Bane, but without the need for Venom and donning a Bat-mask with deep red eyes. He’s fast, brutal and unrelenting. He’s also got quite a few C-list Batman villains backing him up, so plenty of trouble for the two Bats to create some fun and elaborate fights with. And this movie has those scenes in spades!

Ultimately, it appears Batman is killed during the fight as he saves Batwoman from an exploding building, but is himself caught in the blast. Meanwhile, Nightwing, aka Dick Grayson; aka the first Robin; is operating in Bludhaven, Gotham’s sister city. Weeks have gone by since Bruce supposedly died and Gotham is getting to be a really rough place again. It needs a Batman so Alfred calls in Dick to help.

Where DeMatteis and Oliva score on this is showing a conflicted Grayson. He has worked for years to be out from under Batman’s shadow and now he’s donning the very cape that casts said shadow. But he’s still determined to be Batman in his own way and not to be the same guy Bruce was. In that, this movie hits all the right strides. Grayson moves so differently from Bruce that those who knew Batman best can immediately tell it’s someone else under the cowl. And this also provides some of the films best jokes and comedic moments. That’s right, as grim-dark as this movie series has been at times, the levity is still there in some genuine laugh-out-loud moments. Grayson is just as quick-witted as ever, even when trying to scowl more in the Batman uniform.

Once Damian comes back and teams with Grayson, the film takes some banter that is almost straight out of the Grant Morrison and Frank Quietly Batman and Robin run. It’s some of the best dialog writing the series has had yet. And we even get a few heart-warming Alfred moments thrown in, too. Damian fans will be happy to know that he gets some of the best scenes in the film, too, as his struggle with identity and his place in the Bat Family are put to the ultimate test.

The plot is a bit on the thin side, as there are a lot of characters to introduce and build up. Bruce was working on a big world-leadership summit and Heretic and his master are working to take over the world. Typical super villain stuff, and if you’re familiar with the comics you already know who’s pulling those strings. It’s right out of Morrison’s Batman Inc. story, but that’s not a bad thing at all. This is a character study more than a plot-driven piece.

Luckily, Kate Kane, aka Batwoman, is as close to the version Greg Rucka gave us in 2010 as possible. She’s easily the character getting the most development in this story and it’s as it should be. We already know Grayson, Damian and Alfred pretty well from previous films. Her time in the spotlight and the breakout performance she gives might just land her a solo film. Hopefully, anyway. And when a certain future lover of hers shows up, you might just be ready to cheer as loudly as I did.

Luke Fox gets a couple of good hero moments when he suits up as Batwing, though his decision to do so seems really abrupt and without nearly as much conflict as it should have had. But runtimes of these animated movies are a pain sometimes. Not everybody gets to be center-stage, after all.

The climactic fight scene is one for the ages and will satisfy just about any Batman fan, but it is all wrapped up a little too quickly. Such is the curse of some films, but at least the conclusion is a mostly satisfying one, even if you do prefer legacy characters to get a little more time in the spotlight.