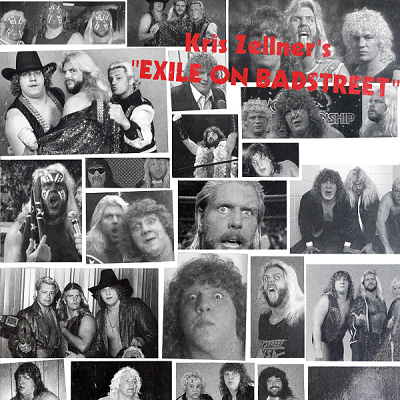 The Exile on Badstreet series, hosted by prominent wrestling historian Kris Zellner, is an in-depth trip through professional wrestling history, focusing on the history of promotions, the careers of wrestlers, and much more. This five-part series on the history of Continental Wrestling is an incredibly impressive undertaking and something we’re quite proud to host here at Place to Be Nation. I want to thank both Kris and Beau for their time, expertise and passion. I also want to give a special shout-out to noted historian Karl Stern for not only his participation, but his help in promoting this fantastic series. Please check out where you can find more from both Kris and Beau in the below and enjoy this five-part compilation. – Brad

Kris also hosts the popular Between the Sheets podcast with David Bixenspan. You can also hear him on our PTBN Reaction Shows and can find him on Twitter @KrisZellner.

Beau has been involved in wrestling (wrestling and promoting) for over 25 years. You can find him on Twitter @kingofkingsport. Please check out Beau’s website – he has a number of DVDs and books on wrestling history, including on this very subject.

You can find all of these shows on iTunes or SoundCloud. They are also on Google Play.

Kris is joined by Beau James to discuss the first year of Continental Championship Wrestling, spanning from June 1985 to June 1986. They go over how Continental came to be and all the major angles and matches of the first year. All of the favorites are discussed here and Beau tells some great stories that have never been heard on a podcast, if ever at all.

Kris is joined by Karl Stern, @dragonkingkarl and WrestlingObserver.com, for the first hour + and Beau for the duration to discuss July 1986 – June 1987 in Continental Championship Wrestling. They discuss all the major angles and matches that took place during the year plus other great tidbits surrounding the promotion. Kevin Sullivan makes his debut, the Stud Stable turns babyface, the New Guinea Head Hunters coming from under the ring, and lots more.

Kris and Beau discuss July 1987-mid May 1988 in Continental Championship Wrestling, Continental Wrestling Federation, and USA Championship Wrestling as yes the promotions have split. They go into a deep discussion of how the split took place with some interesting stories about all the characters involved. They talk about all the major angles of the era and just who was booking what and who wasn’t. They talk returns and exits along with debuts such as Eddie Gilbert making his first foray into this area.

Kris is joined by Beau to discuss May 1988 – April 1989 in the history of Continental Wrestling as well as USA Wrestling. They discuss the differences of the promotion’s booking and which one they liked best. They also talked about all of the personalities that came through at the time such as Willie B. Hert, Ron Wright and his Nazi flag, Missy Hyatt and why she had to turn babyface, and lots more. Plus they discuss the life and death of the Continental Cat.

Kris and Beau talk about the last 6 months+ of the Continental Wrestling Federation in the last part of this miniseries on Exile on Badstreet, spanning from May to November 1989. They talk about how the signs were coming that the promotion was dying, Robert Fuller coming back home to book, new additions to the roster but some old angles that people had seen before, plus Beau gives his thoughts on the best and worst in the history of the promotion.