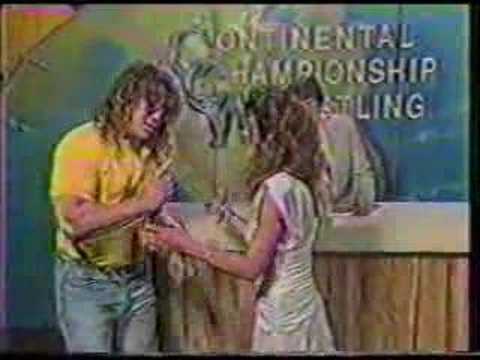 Big thanks to Martin for once again joining us on the show.

Join the Titans of Rasslin’ as they head to the Heart of Dixie for a look at 1980s Continental wrestling from Alabama! Parv is busy in Ireland, so Kelly assumes the hosting seat again, joined by Pete, Johnny and, making his triumphant return to the show, The Fifth Teen Titan Superstar Marty Sleeze (otherwise known as Martin), for a look at wild and bloody action from one of the more underrated territories of wrestling’s eclectic past.

Listeners at home or on the road, follow along by watching the Continental playlist, exclusively found on the Anti-Network, Titans TV! You can check out the entire Titans of Wrestling catalog here.

Also on this episode:

-A brief look at the history of pro wrestling in Alabama, 1950s-1980s
-Gordon Solie utters the GLOAT (Greatest Line Of All Time)
-Halloween Havoc 2012: He-Man vs. The Banana–Dance Floor Death Match
-Ron Fuller: the human tripod
-Ranking the 80s Superbabes
-A look at one of the most shocking and memorable angles of all time: “I’d like to talk to Tom”