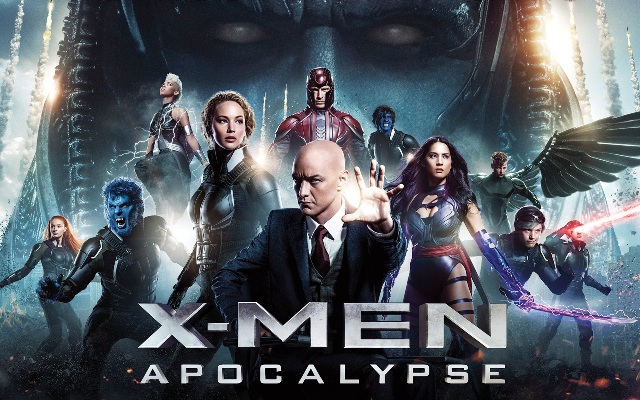 Since Magneto was fond of dropping a baseball stadium on Washington, D.C. in X-Men: Days of Future Past, it’s only fitting that this review kick off with a reference.

Director Bryan Singer has a reputation for making good and sometimes great X-Men movies (see previous reference) and this might be the most ambitious film in the series yet. The question is: how well does that ambition serve the larger narrative of these films?

As long-time X-Men fans will tell you, Apocalypse isn’t just another run-of-the-mill bad guy. He’s the apex villain of the franchise.

Sure, Magneto (played masterfully, once again, by Michael Fasbender), is the one most people think of, but he’s small potatoes next to a mutant who’s powers are so vaguely defined that he could literally pull anything out of thin air and you’d be ready to accept it.

Oscar Isaac (yeah, Poe Dameron from Star Wars: The Force Awakens) turns up the villainy to 11 as Apocalypse and brings a level of menace to the series many of its past villains have come up short on. Viewers are also given a much more concise and satisfying origin for the character here than what was presented in the comics or in the 1990s cartoon. And yet his part still manages to feel underwritten and underdeveloped.

Sadly the same can be said for many of the newcomers here, too. Mostly when it comes to the Horseman.

Characters like Psylocke, Storm and Angel (Oliva Munn, Alexandra Shipp and Ben Hardy, respectively) get quickie, almost throw-away, introductions and viewers are left to fill in the blanks as to why they’d side with Apocalypse in the first place.

Only Magneto gets a solidified reason for joining Apocalypse’s cause and it’s due to a moment in the film that certainly shows Fasbender’s commitment to the role. As mentioned before, he plays the part masterfully and with a level of conviction that makes it hard not to take his side.

For comic fans, filling in gaps isn’t going to be a big deal, but casual viewers will likely be left in the dark. As will nearly everyone who hasn’t seen at least the last two X-Men films.

Singer makes no apologies for those who might be out of the loop, though. This is a sequel that assumes you’ve seen the previous films and know who these characters are. And honestly, sooner or later, that was inevitable. This is, after all, the ninth movie in the series (counting Deadpool…because he demanded it…at sword-point…jerk). If you’re jumping in here, much like actual X-Men comics…best of luck to you.

The plot can be complex at times (insert totally shocked face here). Apocalypse is the world’s oldest and maybe most powerful mutant. He believes in the survival of the fittest and that the world has come to the time it must be cleansed of those too weak to survive on their own.

The themes typically found in the best X-Men stories are present here. There’re the ideas of equality and fighting against bigotry even in the face of those who hate and fear you. Complex ideas about right and wrong are presented, but once the action kicks off they get largely pushed into the background while the CGI takes over. And make no mistake, this is the most CGI-heavy X-Men movie ever made. Though there are still plenty of practical effects that look as good as any of the previous entries.

X-Men: First Class and Days of Future Past both succeeded in feeling like actual “period pieces” in that the aesthetic of both films very accurately recreated the look and feel of the 1960s and 1970s, respectively. This time around it seems like there’s too much plot and far too many characters for the time period to be as present a character as it has been over the last two films. Though there are some fun nods to the early 1980s that are sure to get some nostalgia going.

There are also some great standout performance here, particularly from a few of the new cast members.

Tye Sheridan makes for a compelling young Scott Summers/Cyclops, a character who was grossly underserved by the previous X-Men films. While still not getting a massive role, he’s certainly much closer to center stage this time. And Sheridan plays him in a much more relatable way than James Marsden managed in his time.

Sophie Turner (Game of Thrones) adds a different level of depth to Jean Grey that the previous films left out. Jean’s history was poorly written and explored in the disastrous X-Men: The Last Stand so it’s nice to see it being taken a somewhat different direction by Bryan Singer, but with actual time and effort rather than flashbacks. And no poor de-aging makeup effects for Xavier and Magneto. We have way better CGI for that, now. See Captain America: Civil War for reference.

Speaking of Xavier, James McAvoy continues to make the role his own as he inches ever closer to becoming Patrick Stewart. Some of Xavier’s less-savory traits often find their way to the surface with this take, but McAvoy is so incredibly charming it’s hard not to like him even when he’s being a complete tool. He’s also one of the best sources of humor in the entire film.

And Jennifer Lawrence’s third time out as Mystique might just be the most comfortable she’s seemed in the part. Those expecting a straight villain turn for the character due to her comic book past are bound to be disappointed, though. As with most things X-Men, things are never that simple. And Lawrence plays the character with far more complexity than Rebecca Romijn ever even attempted. After the ending of the last film, fans should expect a bit more of that to be explored, as well. So hopefully you’ve done your homework (watching Days of Future Past) prior to seeing this film.

There are also a few big revelations in this movie that were hinted at in Days of Future Past fans have been clamoring to see. One involving Quicksilver/ Peter Maximoff (Evan Peters) is kind of a no-brainer. And, of course, many will walk away from this film feeling like the most breath-taking scene involved the silver-haired speedster. Though it still can’t reach the heights of the Nightcrawler introduction in X2: X-Men United. It got close, though.

For fans who’ve been waiting a long time to see the various mutants display their abilities and work together in a fight similar to their comic book counterparts, you will not leave disappointed. The climactic fight between the team and Apocalypse’s Horsemen is in the running for best action scene of the series.

The most promising thing about this film is what it hints at for the future. While this movie isn’t on the same level as its most direct predecessors, it still has plenty of high-energy action and excellent character moments to be considered a worthwhile sequel and new beginning for the franchise.

Here’s hoping the next film, set in the 1990s, focuses more on developing its villain and keeps to a core group of heroes so no one feels glossed over.

Piece of the Action #10: Logan