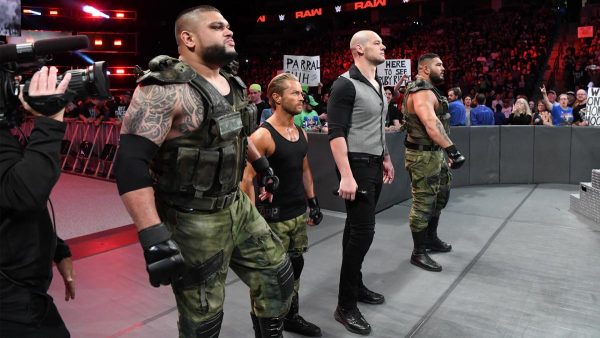 Matt: McIntyre and Ziggler vs The Revival was an excellent Tag Title match. This looked like a great match on paper and it delivered in spades. Drew and Dolph have turned into quite the team and The Revival is The Revival. Real solid action throughout this one with good double team moves and a few great near falls. My one knock against this match was that it was a little short as it only went around 12 minutes. Despite that, they packed a ton of action into this and I’d like to see what these teams could do with a little more time. Good stuff.

Runner Up: Remember this moment as it might one of the few times that Baron Corbin’s name will be seen in the Match of the Week section of the WWE TV Snapshot. Shield vs Corbin and AOP was a really good six man tag that was reminiscent of all the great Shield tag matches from years past. Rollins and Ambrose flying around the ring at the end of the match to wipe out the members of AOP was good stuff. Right move having Corbin eat the pinfall in this one as it keeps AOP strong in losing. If we get a Shield six man tag every week, I’ll be one happy son of a gun.

Jennifer: Tommaso Ciampa vs. Otis Dozovic  After weeks of watching Ciampa make out with his belt, we finally get to see him back in the ring. The NXT Champion expected to put Dozovic away easily but proceeded to get his ass tossed about by the big man. One crushing move after the next, including an awesome Caterpillar, had Ciampa saying “fuck this” and attempting to escape but was turned back by Heavy Machinery member Tucker Knight. Dozovic continued to dominate the match until Ciampa executed a pair of devastating draping DDTs and scraped out the win. What can I say, I’m a Tommaso mark. I love his bumping and selling, his intelligence and presence in the ring, the way the crowd reacts to him. But he was definitely humbled here by ‘ol Otis so we will see what that does for his confidence going forward. My guess is he recovers quickly. 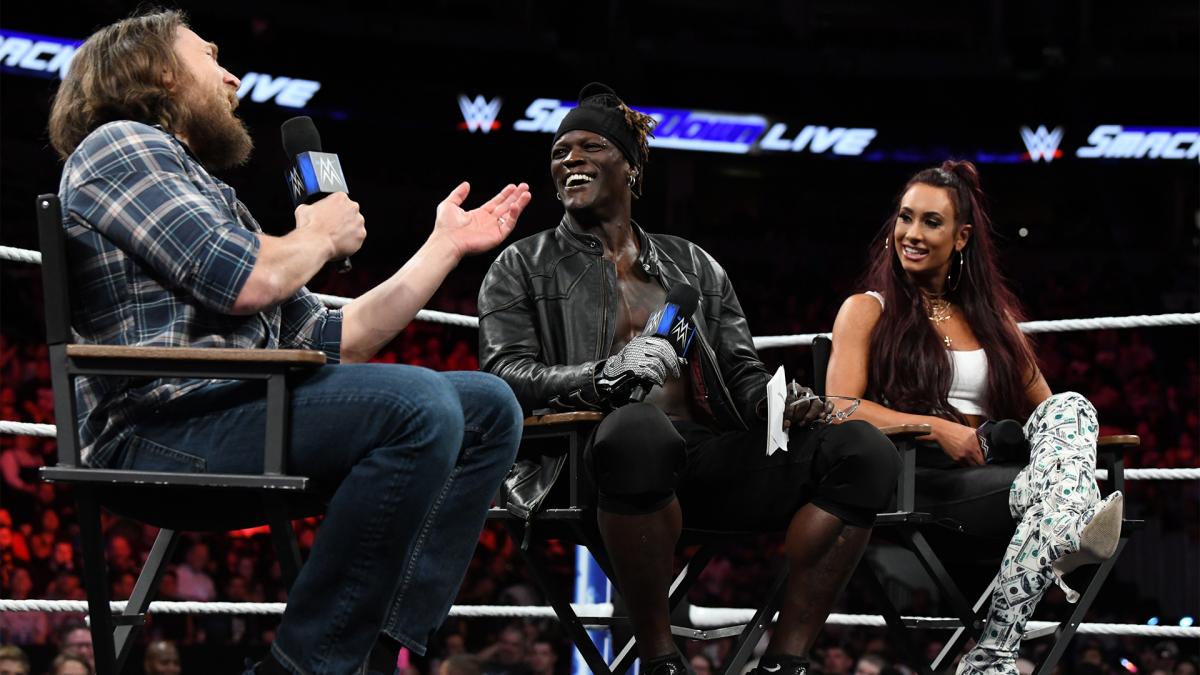 Matt: The best segment of the week on the Raw side of things was the opening segment. Solid promo work from everyone involved here but Rollins and Ziggler’s mic work really shined here. I’m digging the build to the Shield vs. Braun & Company six man tag at Super Showdown and it’s easily the most interesting Ziggler has been in years. On 205 Live, the segment of the week was Brian Kendrick’s ten second win and Drew Gulak’s post-match beating of the jobber of the week. It was a great way to bring Kendrick back after being off TV for a month and they made Gulak look like a ruthless bad ass after his losing his championship match last week.

Jennifer: R-Truth took over Miz TV on SmackDown and dubbed it Truth TV. He and newly brunette Carmella welcomed Daniel Bryan as their guest to talk about his heated feud with Miz. Also, how ADORABLE is this R-Truth and Mella combo?!? (Insert 7 second dance break!) Of course, Miz showed up to ruin Truth’s animal segment which led to a match between them to see whose TV spot would continue on SmackDown. I thought this was a super fun way to open the show. Daniel looked delighted to be there and Truth’s dumb and innocent act is endearing to me. Miz is always great on the mic but I definitely prefer Truth TV.

“As far as him taking my soul, I sold that a long time ago.” – Triple H regarding Undertaker’s comments last week

Jennifer:  “Although your mohawk is quite distracting, the three of us decided that the carpet must match the drapes.” – Big E

“Put your hair up and square up.” – Naomi 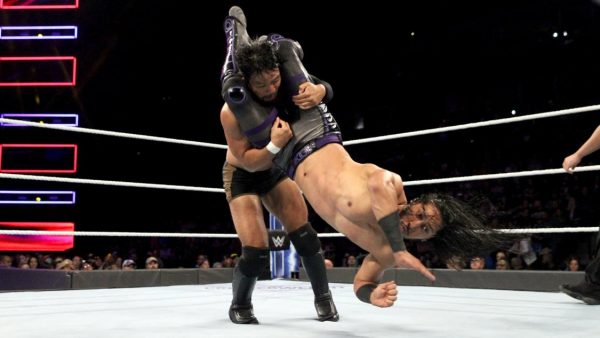 Matt: Kevin Owens was great during The Kevin Owens Show segment and Elias continues to be one of the best parts of Raw each week and one of the best characters in WWE. Lio Rush as Lashley’s manager/hype man is a good fit as Rush is a great talker. Lashley has never been great on the mic so having Rush as a mouthpiece is a shrewd move. I like how they were hinting at an Ambrose turn. And while I would have some reservations if they were to pull the trigger, I think a heel turn would do wonders for him. Maybe it’s because I’m in a good mood or maybe it’s the allergy meds talking but I thought the whole show overall was pretty solid. There were few if any wasted moments, an opening segment that actually moved a story along further rather than just setting up the main event for the night and two good bordering on great matches.

Lio Rush continues to be one of the most entertaining parts of 205 Live each week. Very entertaining match with Noam Dar this week. It’s crazy that he’s this good at only 23 years old. I’d love to see him get a title shot against Cedric Alexander sometime soon. Real good match on 205 Live between Hideo Itami and Mustafa Ali with a completely insane finish that lead to the double countout. I don’t mind the finish here and I think it will probably lead to some sort of stipulation match in the near future. 205 Live is such an easy watch each week and as much as I enjoyed Raw on Monday night, I think 205 Live is the better show this week.

Jennifer: The wrestling was just okay for me but SmackDown was killing it with their segments and continuing storylines this week. Daniel Bryan sat in on commentary during the R-Truth vs Miz match and played it cool as he and Miz eye fucked each other the whole time. Women’s Champion Becky Lynch viciously attacked Charlotte Flair during a photo shoot and later bullied Lana in the ring. But Lana’s head was clearly somewhere else, as Adien English mysteriously asked her about “that one night in Milwaukee” in his continued attempt to drive a wedge between she and Rusev. The New Day had more great jokes but Sheamus had the last laugh in a tidy match with Big E. Another Randy Orton run in and beat down, this time against Tye Dillinger during his fight with Nakamura. Samoa Joe didn’t show up for the contract signing against AJ Styles. Instead, he visited AJ’s home in Georgia and made a creepy ass video while AJ looked on in horror. Daddy’s home!

Over on NXT, General Manager William Regal shocked Adam Cole by making his North American Title rematch a Triple Threat with Ricochet and Pete Dunne. ALL OF THE YES. Furthermore, Undisputed Era will finally face War Raiders for the Tag Team Titles in three weeks. My new lady crush Lacey Evans talked some trash to Candice LeRae while The Dream was all attitude during an interview (imagine that!). EC3 interrupted Lars Sullivan’s absolute beat down of Victor Orchant and they both looked crazy as hell. Reigning Women’s Champion Kairi Sane defeated Vanessa Borne and then accepted Shayna Baszler’s request for a rematch, to be held at WWE Evolution.

Matt: When did Brie Bella turn into the second coming of Mirko Cro Cop??? In all seriousness, Brie Bella has not looked good since her return to the ring and the kicks to the face she hit Liv Morgan with were disgusting.  She should have made sure that she wasn’t going to hurt Liv before throwing those kicks. I’m going to chalk this up to ring rust and hopefully Brie can work some of it off before she seriously hurts herself or somebody else. I don’t like Drake Maverick as manager of the Authors of Pain. He didn’t really do anything at ringside during the main event and I don’t think he adds anything to the team. I’m a fan of Maverick and I think he’s great as GM of 205 Live but he feels out of place as a manager of a team like AOP.

Jennifer: I’m really not picking on Asuka. Or Naomi. Or The IIconics. I want to like them but honestly there are so many compelling feuds in the Women’s Division across all of the shows that this one just falls flat for me. Fingers crossed it gets better!