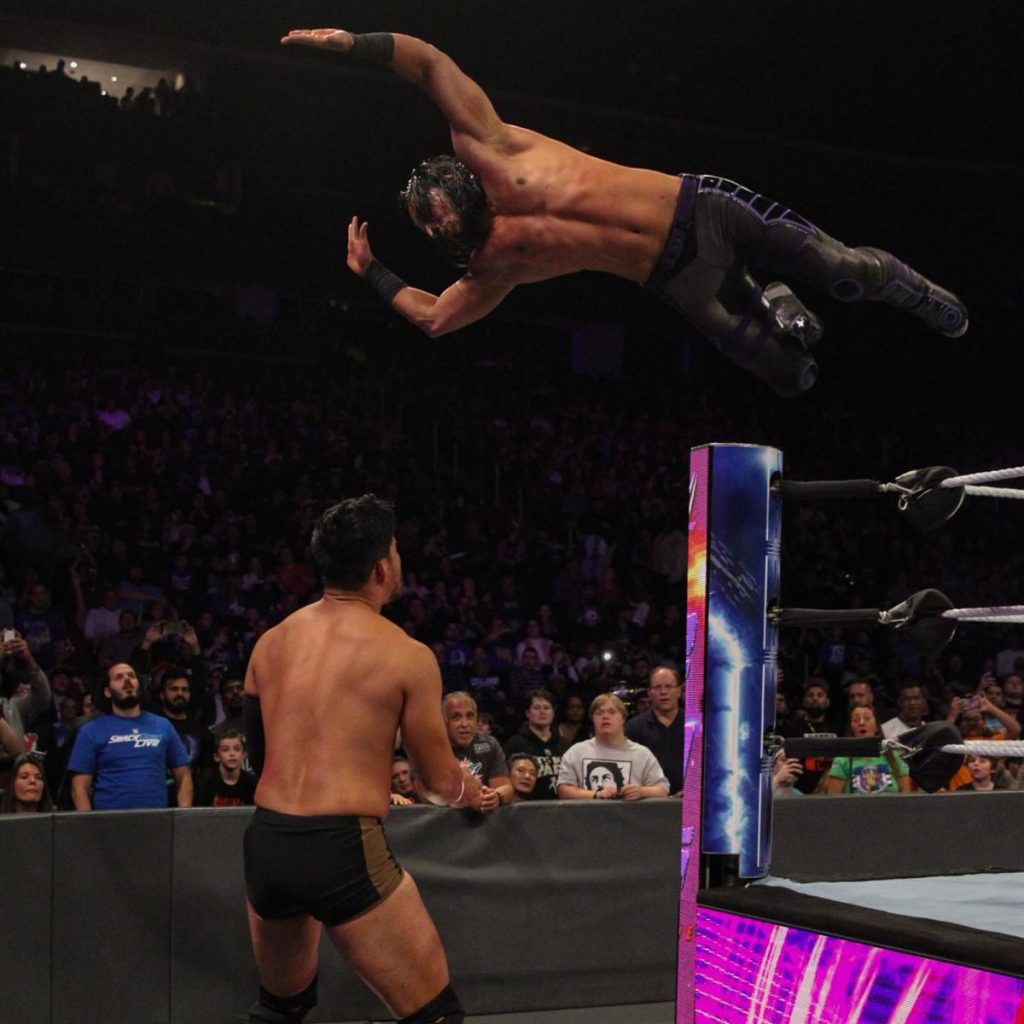 Jennifer: So this week I thought both SmackDown Live and NXT had ok to pretty good matches but there wasn’t anything that stood out to me as great. I’ll just mention the two that I enjoyed most. On SDL, I can’t help but to be enthralled with Randy Orton. He and Jeff Hardy meet for the first time since Hell In A Cell and Randy is up to his usual fuckshit junk, which I love. Putting Hardy on the announce table, twisting his finger through Jeff’s ear gauge, dropping him with a RKO for the win. And he’s just so damn cold about it.

Over on NXT, things were hot when EC3 interrupted Adam Cole’s stumping and told him that he didn’t deserve another shot at the NXT North American Championship. Cole responded with a match challenge right then and EC3 accepted. With the Undisputed Era at ringside, The Top One Percent did a good job tossing Cole about and keeping his buddies from interfering in the match. To Cole’s amazement, EC3 rolled him up for the pin. EC3’s victory was short-lived, however when UE jumped him and he took a steel chair to the knee. Cole is like a heat magnet so I’m interested to see where this goes.

Brian: On 205 Live, the Last Man Standing match between Mustafa Ali and Hideo Itami was fantastic and a good blow off to their feud. The match stipulation was utilized to near perfection and the finish was tremendous with Ali putting Itami through a table with a 450 splash to the outside. The match also put Ali in a position to become a #1 contender as he faces Tony Nese next week with the winner getting a title shot.

Jennifer: NXT General Manager William Regal was about to announce Tommaso Ciampa’s opponent for the Championship at Takeover: War Games when all hell broke loose. First it was Velveteen Dream, then The Freak Lars Sullivan. And then Nikki Cross interrupts with a warning that “He’s coming.” Cut to Aleister Black backstage, dropping security guys left and right on a path of destruction to the ring. He takes Sullivan’s face off with a Black Mass and demands to know where his attacker is while Regal cowers. Then Johnny Freaking Gargano comes from outta nowhere and superkicks the fuck out Black, stands over him and says “I’m right here.” Amazing.*insert heart eye emoji*

Brian: The WWE was turned upside down this week when Roman Reigns went on RAW to reveal that his Leukemia returned and that he will vacate the Universal Title. He managed to give an inspiring, heartfelt speech that any fan watching will likely never forget. Reigns talked about not letting any curveballs handed to you by life get in your way and vowed not only to beat cancer again but to also return to WWE. The end with the rest of The Shield coming out was emotional and all prayers go out to Reigns and his family during this difficult time.

Jennifer: “I thought I was booked to be on Truth TV.” – Rey Mysterio

Brian: “I want to make one thing clear, this is not a retirement speech. I’m coming back home (WWE). And when I do its not just going to be about titles and being on top its about a purpose. I’m coming back because I want to show all of you, the whole world, my family, friends, my children, and my wife that when life throws a curveball at me, I’m the type of man who will stand in that batters box and I will crowd the plate, choke up, and I will swing for the fences every single time because I will beat this and be back so you will see me very, very soon.” – Roman Reigns when addressing the crowd that his leukemia has returned.

“Unlike everyone else around here apparently, I am not afraid of Braun Strowman. And after tonight, you’re not going to have to worry about a thing, trust me.” – Drew McIntyre to Dolph Ziggler. 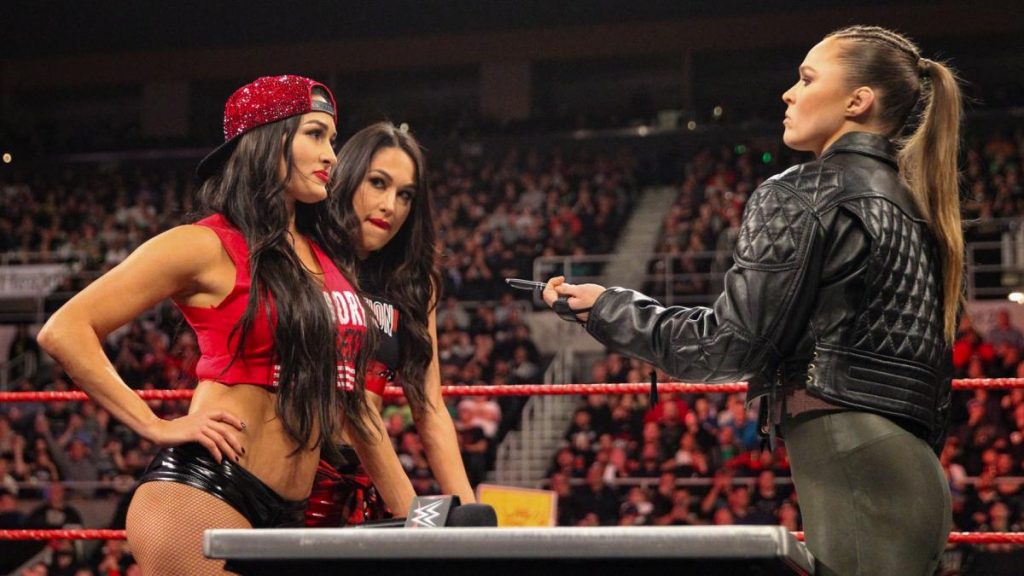 Jennifer: Ehh, I’m on the fence about this AJ Styles and Daniel Bryan thing. They lost to The Usos again because of apparent “miscommunication.” Mmmhhmm. Miz TV was great, with a short interview with super over Rey Mysterio. Miz cut a fantastic, arrogant promo as usual and Rey was quick to challenge him to a match on the spot. As lackluster as the mini Battle Royal preview was, I did enjoy Carmella and her dance break. Mia Yim won her debut match on NXT and I thought she looked pretty good, excited to see more of her. There were a lot of video packages on NXT this week but my favorite was a highlight of Lacey Evans. Even though my son called Kassius Ohno “a fat ass AJ Styles” I thought his slaughter of Justin Xavier was fun to watch.

Brian: Heyman’s speech about Reigns and the now vacant Universal where he told Strowman that he is inferior to Lesnar in every way was excellent. Strowman coming out and getting attacked by McIntyre also continues their feud. I’m loving how they are presenting McIntyre as a legitimate threat. The contract signing between Ronda Rousey and Nikki Bella was another great segment between the two. The material and character work has been strong. Turning Elias face makes sense due to his reactions from the fans and in his case the gimmick should still work as he can just rag on his opponents instead of the fans. I get fans being upset over Dean Ambrose turning on Seth Rollins on this show but since Reigns is going to be out for a while there was no reason to drag out the angle any longer. Ambrose did an incredible job and just went nuts on Rollins. 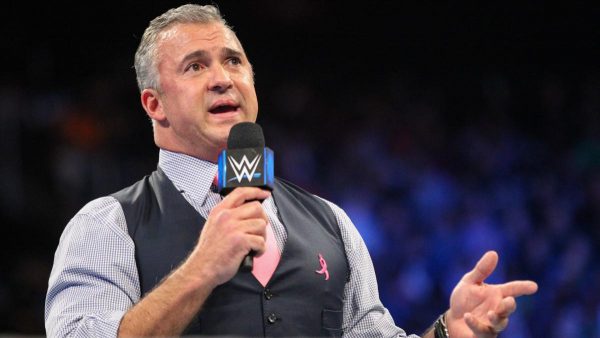 Jennifer: There was a mini Battle Royal preview on SmackDown. Not surprisingly, Asuka was the last one standing. The New Day getting their asses handed to them by fuckin’ Big Show and The Bar. No thanks. Shane McMahon’s pathetic attempt to get the WWE Universe hyped for Crown Jewel by emphasizing the importance of the World Cup. Sigh.

Brian: As great as the build for the Rousey vs. Bella match has been the rest of RAW’s Evolution build has been subpar. The Battle Royal promos were weak and the Trish Stratus & Lita segments on RAW have not been good at all but at least in that case the match should still get a great reaction live. Apollo Crews as a babyface here was a failure and . He might not have been able to get cheered over Elias if he handed out money to the fans. Lio Rush talking throughout Lashley’s matches is just grating. And even though it was likely pretaped, having the Brothers of Destruction promo in a graveyard featuring the headstones of Triple H and Shawn Michaels was not the best thing to air on this show.