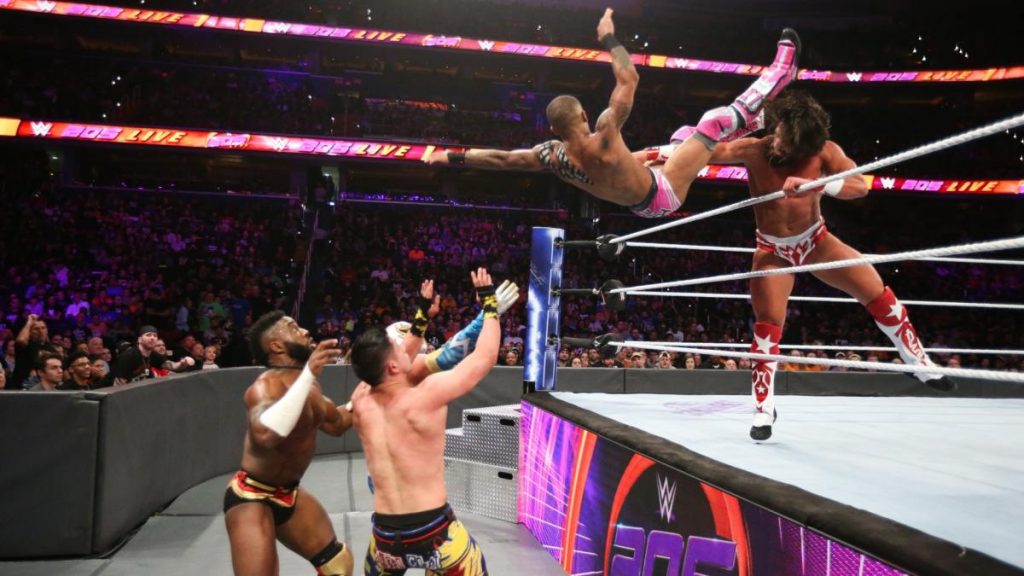 Matt: Match of the week goes to New Day vs The Bar for the SmackDown Tag Titles. I thought this was a fine, run of the mill tag match. Nothing bad, but not particularly great either. Kind of surprised that they switched the belts already. Makes me wonder if The Bar was supposed to be the team to dethrone the Bludgeon Brothers and they had to change plans and quickly put the titles on New Day when Erick Rowan went down with his injury.

Brian: The fatal five-way match on 205 Live was excellent, both from a match quality and storyline perspective. It was an all-out blitz that saw all five men get a chance to succeed and it touched upon existing feuds like TJP against the Lucha House Party and Cedric Alexander and Tony Nese with Nese pinning him again as Cedric’s continues his descent after losing the Cruiserweight Championship. Lio Rush really got a chance to shine in the ring and show his talents there as opposed to being on the mic. A match worth seeking out. 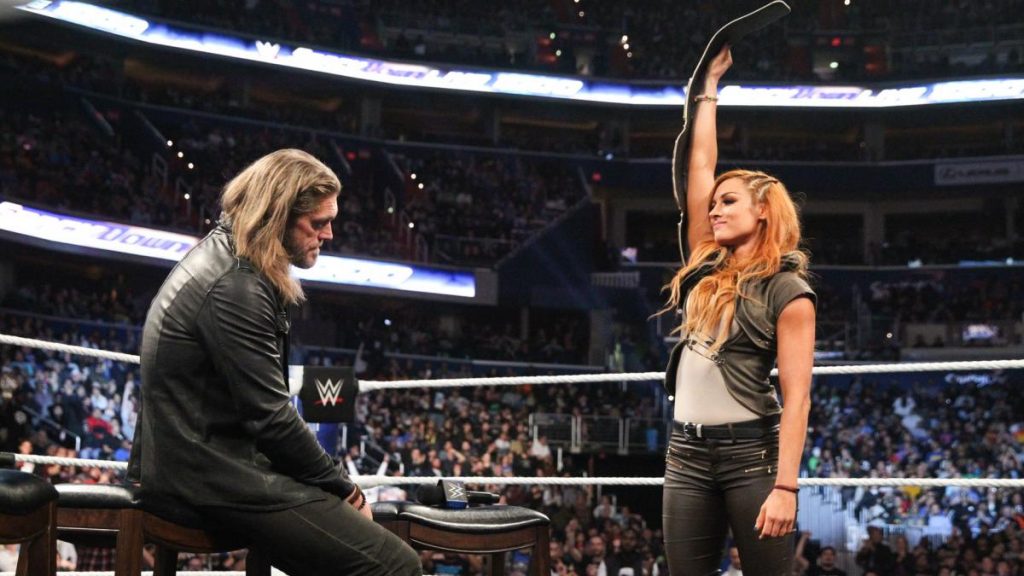 Matt: The Segment of the Week on SmackDown was The Cutting Edge with Becky Lynch and Charlotte Flair. Edge was excellent in his role as the bitter retired wrestler and how he basically told Becky to not make the same mistakes he made. Becky continues to knock it out of the park with this new “screw everyone” bad ass character of hers. The pull apart brawl at the end of this segment was really great as well. I loved this. Great stuff.

NXT’s Segment of the Week was the Nikki Cross vs. Bianca Belair match and the post match featuring the return of Aleister Black. The match itself was really fun brawl and I didn’t mind the No Contest finish as it led to the appearance of Black. The post match stuff with Cross telling Black her secret and Black freaking out was excellent and I’m very interested to see where this whole thing leads. The Aleister Black saga is easily the most compelling storyline going in WWE right now.

Brian: RAW’s segment of the week was the bit between Ronda Rousey and The Bellas. Having Ronda lay into the Bellas for being desperate for attention and leeching off of their men while the Bellas smugly told her she was not in their class worked great and the fans were invested. Ronda had her best performance on the mic and the Bellas are playing their roles to perfection. Looks like they are also trying to get over the “DNB” catchphrase (which stands for “Do Nothing Bellas.”). Having The Bellas bring out their own security was a nice touch too.

On 205 Live, the Mustafa Ali vignette to hype his Falls Count Anywhere match next week against Hideo Itami was effective and due to the fact it was produced different than your standard WWE taped segment it stood out. Having him walk around the streets in the pouring rain and wind gushing gave it a raw, edgy feel that is missing from the company. Ali continues to shine in 2018. 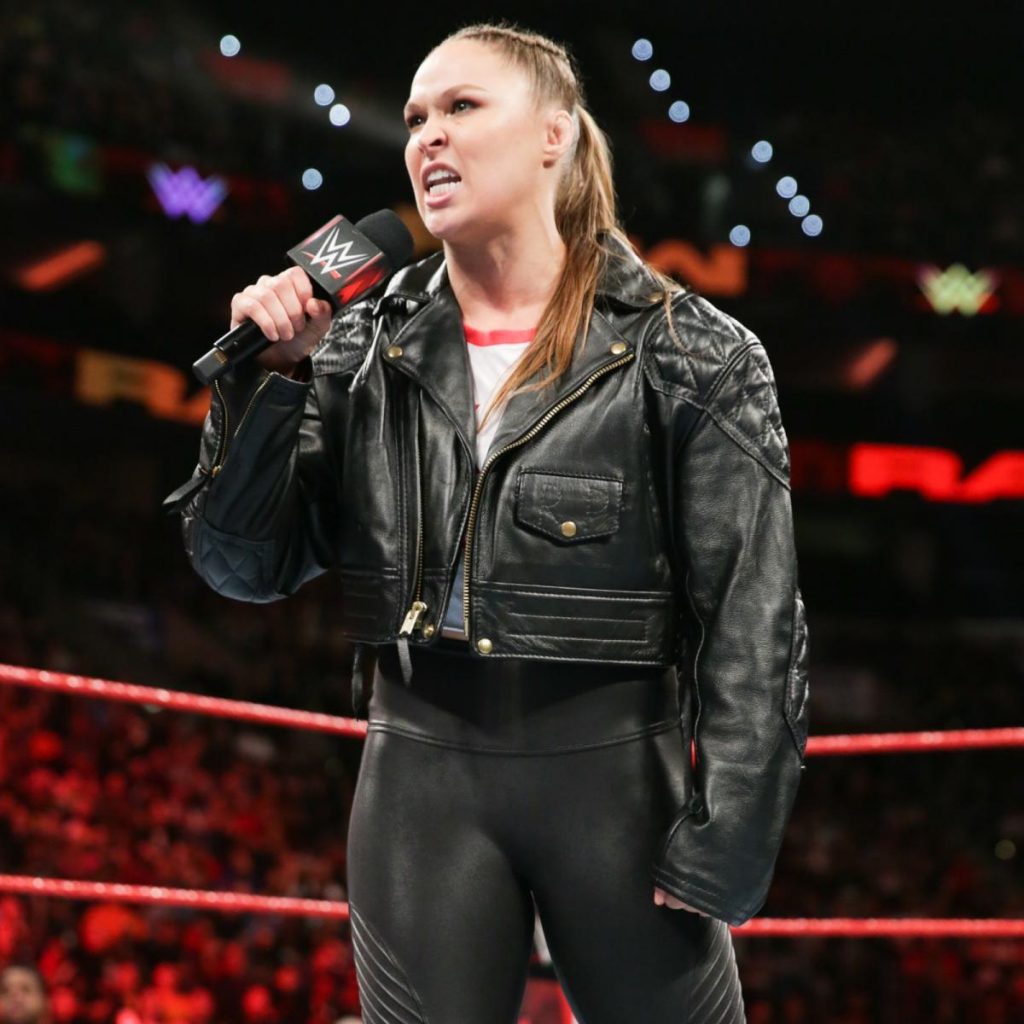 “You keep that thing in your pants” – Batista to Ric Flair

“There is nothing that this man hasn’t done in this business… Except beat me.” – Batista to Triple H

“Careful you don’t hurt your neck again going through those ropes.” – Becky Lynch to Edge

“I have heard that you are talented, I’ve just never seen it. You know, its like I’ve never seen Bigfoot or the Flyers win the cup.” – Elias to Apollo Crews.

“Well we have three words for you… rest in peace.” – Kane & Undertaker to DX 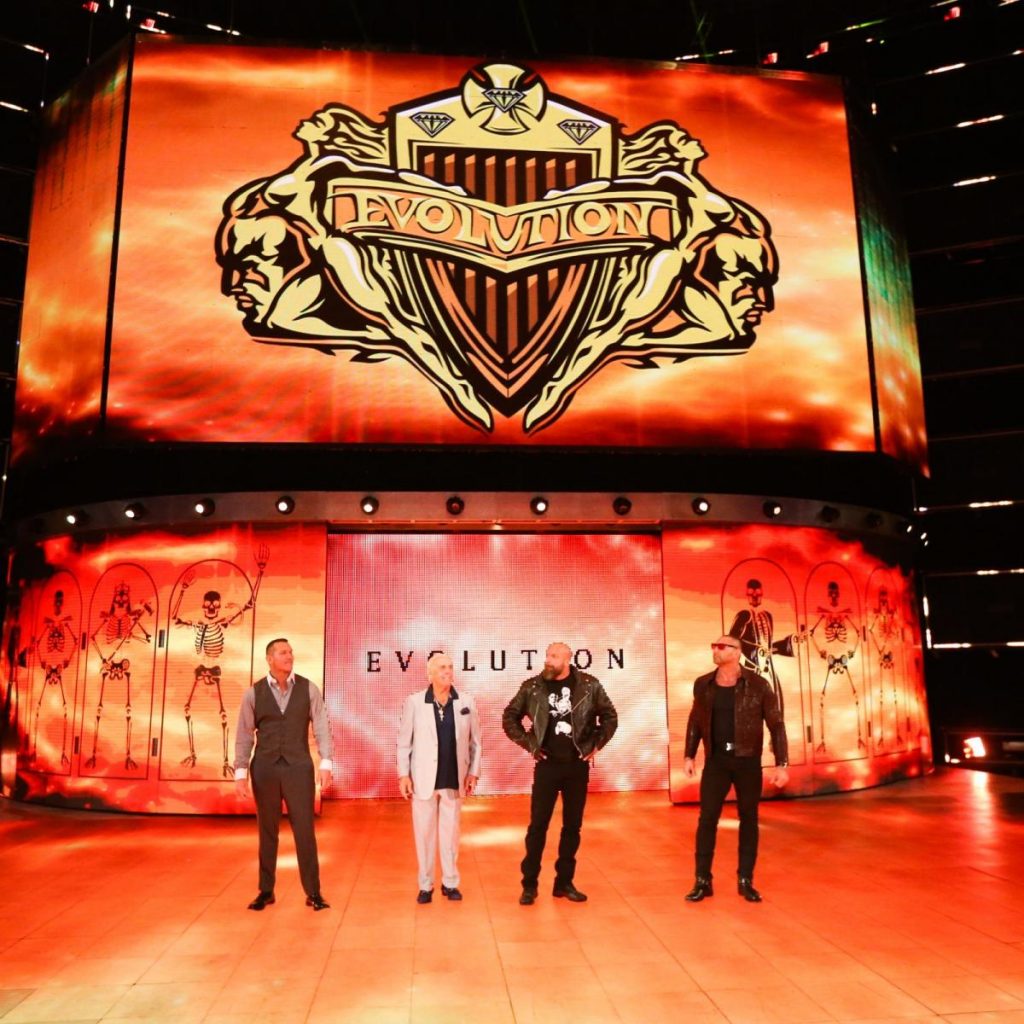 Matt: I really liked the opening video of SmackDown showing some of its memorable moments. The video packages that WWE produces are some of the best thing about the company. The Evolution reunion segment was really well done. Batista was the star here with a great promo and you could see that he was genuinely thrilled to be there. I liked them planting the seeds for a future Batista vs Triple H match here as well. The match has been rumored for years and it looks like it may happen sooner rather than later. Perhaps at WrestleMania next year?

The War Raiders vs Undisputed Era Tag Title match was a perfectly solid match and the DQ finish guarantees that this feud will continue. Bobby Fish returning at the end of the match and causing the DQ was a great way for him to return from his long layoff. Shayna Baszler’s complete destruction of Britt Baker was really well done. This was a great way to make Baszler look like a ruthless badass going into her rematch with Kairi Sane at Evolution. The elbow stomp Baszler gave Baker was vicious looking and I thought Baker did a nice job selling the injury. Nice to see Oney Lorcan and Danny Burch return to NXT after Lorcan basically broke his face back in June. They looked great during their match against Tian Bing and Rocky.

Brian: On RAW I liked the opening and closing segments as they continue to tease Dean Ambrose turning on his Shield brothers and we saw Drew McIntyre have enough of Braun Strowman and gave him the Claymore Kick after Strowman hit Dolph Ziggler with a powerslam. It sets up intrigue for next week. The Brothers of Destruction promo was good as while I’m not personally excited for their match against D-X this was effective and fit in with the storyline. And as usual, Elias was entertaining while insulting the crowd.

I loved how 205 Live started off the show with GM Drake Maverick hyping up everyone in the Fatal Five-Way match and why they deserved take part and how they could win. It made all five guys seem important. The character work in general this week was great I thought. We saw TJP as the arrogant jerk stealing masks off of Lucha House Party and wearing them around his neck like a chain and the formation of Buddy Murphy & Tony Nese as a duo is working so far and with Nese winning two matches in a row he might find himself in line for a title shot. And next week we see the debut of Mike Bennett and get the Falls Count Anywhere main event of Itami vs. Ali.

Matt: I was not a fan of how they continued the AJ Styles and Daniel Bryan build. I hate it when they do the “two face wrestlers team with one another, something happens during the match leading to dissention” thing. It’s a played out and tired trope. Why did Miz vs Rusev only last 45 seconds? Were they short on time? I get having Aiden English distract Rusev causing him to lose the match, but in 45 seconds? It makes Rusev look weak. While I thought that The New Day vs The Bar match was fine, I really did not enjoy the finish. Big Show heel turn number 768 was an unwelcome surprise. The amount of times his character has turned has to be a running joke. It’s absurd. Rey Mysterio vs Shinsuke Nakamura was incredibly disappointing. I was expecting a really good match but I thought that it was just ok. Can we talk about how Nakamura has looked uninspired and has been going through the motions since the AJ feud? It was really noticeable here. If Nakamura can’t get inspired for that match, then there’s a problem.

Brian: As good as the build for Nikki vs. Rousey was the rest of the women’s segments were subpar. Having the Riott Squad squirt condiments all over Natalya’s dressing room door (and why does Natalya have a private dressing room anyway?) was an incredibly lame insult. And having Trish Stratus & Lita use Allen Iverson’s well over a decade old rant about practice as material did not get over and in general that segment was saddled with awful dialogue. Also, even after turning heel we are seeing Lashley continue to struggle in getting any sort of reaction from the crowds. RAW’s main problem is that they have too many cold acts throughout their 3 hour-long show.