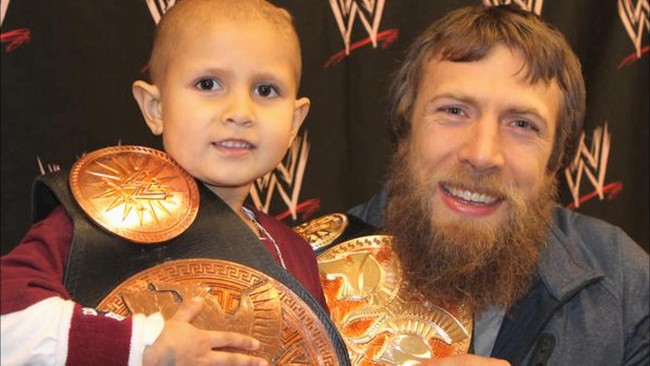 On the evening of June 24, 2014, WWE issued the following press release:

PITTSBURGH – WWE Chief Brand Officer Stephanie McMahon and WWE Executive Vice President of Talent, Creative and Live Events, Paul “Triple H” Levesque have announced the formation of “Connor’s Cure,” a charity that they have personally funded through Children’s Hospital of Pittsburgh Foundation named in honor of Pittsburgh native Connor Michalek. Connor passed away at age 8 earlier this year from Medulloblastoma, a rare tumor that affects the brain and spinal cord. Donations to Connor’s Cure will provide funds for pediatric brain and spinal cancer research, and medical care for children and their families.

Through the love of his family and Children’s Hospital of Pittsburgh of UPMC, Connor persevered over his affliction. His fighting spirit made him a local celebrity in Pittsburgh, including getting Superstar treatment from both the Pittsburgh Pirates and WWE. Although Connor lost his battle to cancer, his message of light and love continue to thrive.

Donations can be made by visiting: www.givetochildrens.org/CONNORSCURE. (Courtesy WWE.com)

The establishment of the Connor’s Cure charity is a continuation of the bond that the company formed with an inspirational young child that brought smiles to employees and fans alike. All the information you need to know is above, because that is all that matters. Whether you are a fan of the company or not, whether you agree with the direction of the on air programming or not, you cannot deny the admiration the company as a whole had for Connor Michalek or the joy WWE brought to Connor in his final months. It is impossible to look at the smile on Connor’s face in the video below and not immediately flash back to a time in your life when the wrestling business brought that sort of emotion out of you.

Connor Michalek is a reminder that life just isn’t fair, that every day we have on Earth is precious and should be treated as such. We can get so caught up in our day-to-day activities and it can cloud the bigger picture of what truly matters. I won’t sit here and tell you what should matter, that is for you to decide, but every now and then, when you need to slow down and center yourself, just remember that little boy that brought smiles to even the most cynical of people and the effect he had on so many of us in so little time. RIP Crusher, your legacy will live on.

(Get your tissues out…)