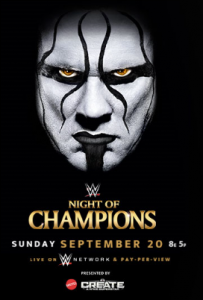 You may recall that I previously only made a habit of watching WrestleMania on a yearly basis and no other wrestling events. It wasn’t out of any form of disliking the sport, it was solely out of a tradition. Yet it would appear that fate was conspiring to turn me into a full on wrestling fan.

My tale begins in May of 2014. I was contacted by Jason of this website asking if I wanted to join to write movie reviews. I considered for about five seconds before saying yes. I looked into the site a little more after agreeing, and saw that much of the focus was on wrestling. I had no opinion on that. I thought it could be fun. And to be sure, it was. It didn’t sway me into being a WWE fan, but I found myself gradually reading more of my colleagues articles and listening to podcasts. 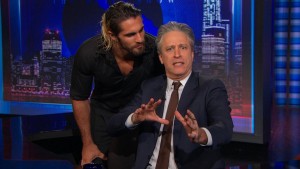 Next came Jon Stewart announcing his retirement which caused me to watch The Daily Show on a more regular basis. On February 26th, during his Moment of Zen, we received an interruption from superstar Seth Rollins. From what I was lead to understand, Seth and Jon had started a feud. Now they were bringing it to a head, with Rollins appearing behind Stewart on The Daily Show to tease Stewart confronting him on the following Monday Night Raw. My curiosity peaked both from my wanting to see the host venture outside the relative safety of his news desk, and to see where the WWE was going with this plot. Thus, I watched Raw for the first time.

The day after WrestleMania 31 in my dorm room, my roommate let me know of his intentions to watch Monday Night Raw across the hall with our friend who had hosted us the night before. I was surprised. More wrestling that soon? Surely the wrestlers would get this week off? Evidently, it’s every week. Regardless of pay per views. For the rest of the semester, I would spend my Monday nights watching Netflix, but as I would walk down the hallway, I would stroll past the “wrestling room” to see them watching Raw, and I would often linger.

The final nail in the coffin came on July 13th. I was flipping through channels to the Mets game when I stumbled upon Raw. I only intended to watch for a minute, but there was a triple threat match between Kevin Owens, Cesaro and Rusev for a chance to take on John Cena for his United States championship. I got pretty into it, and forgot about the Mets.

From that day, game over. I started watching Raw on a weekly basis. I began doing research on the various wrestlers and events in order to watch with history in my head as to what is going on. I watched all the previous Raws on Hulu. I was fascinated by all of it. Soon SummerSlam came about. I was at work, and unable to watch. But my WrestleMania companion and best friend Hassan kept me updated as to the goings on by sending me what was happening. I was still rather novice as to much of the sport at this point, but when I was informed Jon Stewart had attacked John Cena in the title for title match, I found myself actually using the phrase “Why would he turn heel?”

It was around Night of Champions in which my destiny as a WWE fan had been completed. I had subscribed to the WWE Network in order to watch. But I was at work again, so Hassan once more sent me updates. Throughout the evening, I had discussions with fellow associates about what was going to happen. Such as how the feud between Dolph Ziggler and Rusev really had lost all steam since Lana was injured. There was nothing to keep the WWE Universe interested. And the fact that they will once again wrestle at the Madison Square Garden PPV has me yawning.

I finished my work early, and was granted permission to leave. So I rushed home in time for the start of the John Cena v Seth Rollins match. Hooray! Before we cut to the action, here comes Sheamus once again teasing a cash in for Money in the Bank after the Sting match. I like Sheamus. Primarily due to my predominantly Irish background. But there is no way he is cashing in successfully. He’s teased it far too much. It’s way too obvious a move.

I was right. And for my studying and catching up on the WWE, I was rewarded by completely understanding what was happening when the Demon Kane made his way into the ring and choke-slammed Rollins. What a rush!

I didn’t not want to. And I still don’t know why I did. But I’ve fully embraced the WWE. A lot of it may have to do with the theatricality of it all. My major in digital media production and minor in theater makes me appreciate how much work goes into setting up the arena, checking the equipment, and assuring all goes right with the show. The theater in me fell in love with the direction that needs to be done with the technical aspects and the performance and mic work each of the superstars needs to convey. But the physicality of it all is all fanboying. There’s always the 10 year old in me that looks at a complicated suplex, red arrow, or RKO and is just stunned with a childlike “Wow! That was awesome!”

It’s all beautiful. Why did I wait nearly 23 years?