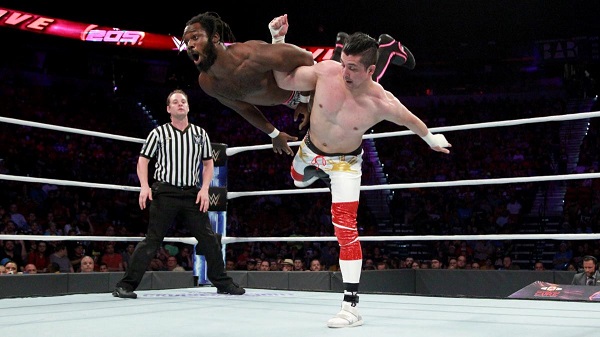 From the Thomas and Mack Center in Las Vegas, NV

Dasha Fuentes asks Rich Swann how he feels about facing off against friend TJP tonight. Swann smiles and talks about their rivalry then we see clips from their first match that Swann won. However, TJP interrupts and accuses both of selective memory and has the clip of him winning the second match air. After that, Swann says he will not lose tonight and leaves as TJP is upset.

Swann works a side headlock to start as TJP tries to escape. After that TJP trips up Swann after a reversal sequence and attempts the knee bar but Swann escapes. TJP rolls outside after getting dropkicked then Swann hits a senton from the apron. Back inside, Swann boots TJP in the back then hits some chops in the corner. TJP is able to dropkick Swann off of the middle rope then he stomps away in the corner. TJP stays in control but is booted while trying a corner splash. TJP fights back and gets two with a basement dropkick then hammers away. He gets two with a back suplex variation that looked nasty before working a surfboard. Swann escapes then blocks a kick before starting his comeback. Swann hits a few kicks then tries a double underhook move but TJP counters that with a hurricarana then hits a springboard forearm smash as both men are down. They get up and trade strikes until knocking each other down again. TJP tries for the Detonation Kick but Swann rolls through and we get some more reversals until TJP locks on the knee bar. Swann tries to get out but TJP hits a chicken wing gutbuster for two. Swann fights off TJP then they trade pins until Swann hits a roundhouse kick then hits a fisherman’s buster, called the “Fantastic Voyage” as that gets two. Swann then goes up top and hits the Phoenix Splash for the win (12:02) ***1/4. After the match, TJP is upset as Swann offers a handshake. TJP shakes his head as Swann smiles before leaving. TJP then stops Swann and offers a half-assed handshake before leaving as the announcers wonder if Swann will now be in line for a shot at the Cruiserweight Title.

Thoughts: I feel bad for these guys as they had a damn good match but no one cared. Swann winning elevates him to a possible title shot as this feud is about ready to end.

Clips of last week’s Fatal Five Way Elimination Match where Enzo Amore became the #1 Contender. They highlighted the fact Cedric Alexander pinned three people until Enzo snuck up from behind for the win.

Backstage, Mustafa Ali is with Cedric. He wonders how he stayed this calm as Cedric says all he can do now is refocus and be where he wants to be but The Brian Kendrick interrupts. Kendrick tells Cedric if he keeps letting people walk all over him he’ll be kicked to the curb. Cedric says he does not know how things worked when Kendrick was younger but he is not going to lie and cheat his way to the top. Kendrick says that Cedric is spineless and there is a difference between keeping your head up and having your head in the clouds before he walks away. They sure did make Ali and Alexander sound like geeks with the lines they were fed, especially Ali who has been forgotten since his feud with Drew Gulak.

Gulak is in the ring. He talks about how last week he tried to entertain 205 Live with a Powerpoint Presentation but was interrupted by Akira Tozawa. Gulak says even a ground-based wrestler with skill lie himself can be thrown off by a chant. Gulak says that Tozawa is overseas so he will make the best of this and show us the rest of his Powerpoint presentation. We start with slide 3 of 277 that reads “no chants.” Gulak thinks wrestlers should wrestle in complete silence out of respect and stresses that to get boos. He then talks about banning “elaborate ring gear” and that he has a pair of trunks and boots, which is all you need. Next, Gulak tells us interrupting is rude and does not give the chance to get your thoughts out but the Fashion Police come out to interrupt. The crowd is into them but Gulak is pissed. They head inside and say they got a tip about an impersonator and were tipped off by “Captain Underpants.” The crowd starts chanting this as Fandango gets in Gulak’s face and tries to grill him until Breeze says they’ve gotten so many complaints they had to come here to 205 Live to address Gulak’s trunks. Gulak tries to leave and say they are not real cops but is threatened with charges of insulting a fashion officer as Fandango cuffs him but Gulak runs away and gets chased around the ring until tripped. A surprisingly fun segment that the crowd enjoyed. The Fashion Police act has been great and Gulak deserves credit too as he was a great foil to them and continues to embrace his character.

Clip from last night’s RAW where Enzo was berated on “Miz TV” then got laughed at backstage by Neville when he got his ass kicked by Miz and the Miztourage.

The Brian Kendrick vs. Cedric Alexander

The announcers put over Alexander’s stock and his Lumbar Check finisher. Kendrick lands the first shot but Alexander fights back. He hits an enziguiri from the apron and follows with a springboard clothesline that gets two. Kendrick grabs on to the ropes and tries to catch Alexander with the Sliced Bread but gets elbowed then Alexander flies out with a tope con hilo. Alexander throws some punches from the apron but Kendrick removes the covering from the steel cable in the corner and pulls him in as Alexander sells like he cannot breath. Jack Gallagher’s music plays as he runs out with his umbrella. Kendrick slides a bell into the ring then Gallagher steps on it and motions that he is hitting Kendrick with the umbrella but instead attacks Alexander for the DQ (3:43) *1/2.  Gallagher then beats on Alexander as Kendrick watches from the corner. Gallagher drops Alexander with a headbutt and kicks him outside before offering Kendrick a handshake. Kendrick accepts and smiles as Gallagher nods as the announcers want to know what has happened to Gallagher.

Thoughts: Turning Gallagher makes sense to me. I’ve felt that way for a while since his feud with Kendrick has been awful and prior to that he was floundering since whatever plans in the work he had with Austin Aries were dropped when Aries quit. Plus, the heel side on 205 Live needed depth. However, aligning him with Kendrick after their mess of a feud is a head-scratcher especially since he was busted open in their match from two weeks ago. You could have Gallagher attack Alexander without the Kendrick pairing.

Final Thoughts: The Gallagher turn was big news and the Swann vs. TJP match was really good. Plus we had a fun Fashion Police segment in an abbreviated but solid edition of 205 Live. Cedric Alexander appears in line for a push soon too and it makes sense because he is the best overall babyface performer in the division.