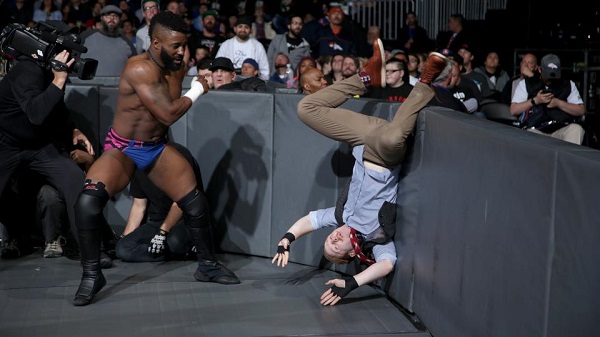 From the Pepsi Center in Denver, CO

We get a video package about Enzo pissing off the entire Cruiserweight Division over the past few weeks while having a “no contact” clause that they violated, thus forfeiting their title shots. This leads to GM Kurt Angle signing a new member to the division in Kalisto.

Tonight, Kalisto will make his 205 Live debut against Ariya Daivari. Plus, Cedric Alexander will take on Jack Gallagher.

Before his match, Kalisto is in the ring speaks in Spanish before telling us that Angle gave him the opportunity of a lifetime and that the Cruiserweight Division features the hardest working guys he has ever met but Enzo comes out to interrupt. Enzo tells Kalisto he has a nerve coming here and he would be embarrassed to donate his outfit to the Salvation Army. Enzo then mocks Kalisto for not being able to sell his masks but will now because this is the “Zo Show” and brags about the money he makes. Kalisto cuts him off to say he talks too much and reminds us how he won the Cruiserweight Title as we see a clip of him kicking Neville in the balls to win at No Mercy. After this ends, Enzo pretends to kick a field goal and says it doesn’t matter how you win then reminds us how Kalisto ended up in a trashcan courtesy of Braun Strowman. Enzo then says Kalisto has been a “Lucha Letdown” since dropping the United States Title and is a hater then talks about even signing autographs for his haters too. Enzo then introduces Daivari as the “Persian version of Drake” and despite what he said about him last night will be victorious tonight. Enzo then shakes Daivari’s hand as he makes his way to the ring. Not a fan of this segment at all. Enzo went on forever and trying to be snappy and clever is fine if there is a purpose but I have no idea what they were trying to accomplish with this segment. Plus, having Kalisto trying to shame Enzo in an attempt to get over was a moronic idea since Enzo is someone without any shame whatsoever. Kalisto was presented like a goof and was treated like one by the crowd as a result.

Daivari beats on Kalisto to start. Kalisto fights back and uses a tilt-a-whirl headscissors then flies out with a springboard senton as Enzo looks on from backstage. Daivari slingshots the ropes into Kalisto’s neck then hits a backbreaker for a two count. Kalisto eats boot on a charge then Daivari hammers away in the corner. Daivari uses a chinlock now but Kalisto escapes with a jawbreaker then runs wild until Daivari catches him with a spinebuster. Daivari heads up top with a frog splash that almost gets the win and pulls him up slowly after some taunting but Kalisto is able to surprise him with the Salida Del Sol for the win (4:43) **.

Thoughts: The action was fine but nothing to write home about and it did not really do anything to get Kalisto over as he sold for a majority of the match. Daivari is a bland competitor who the company protects somewhat and I cannot figure out why.

A video package on the alliance between Jack Gallagher & The Brian Kendrick as they feud with Cedric Alexander.

Drew Gulak comes out to the ring. He considers himself a grass-roots fellow but is not afraid to reach for the starts to create a “Drewtopia.” He then blames Akira Tozawa for robbing us the opportunity to see the other 269 Power Point slides to make a better 205 Live. However, Gulak starts off this week with #8 and that is no flipping. He is about to introduce #9 but his opponent, Mustafa Ali, comes out to the ring. After that, Tozawa comes out and starts chanting to distract Gulak.

Gulak takes down Ali after the two trade holds. He then headbutts Ali in the midsection but is taken outside as Tozawa continues to chant as he sits in a chair on the stage. Gulak is going nuts and grabs his “no chants” sign and marches around the ring. Back inside, Gulak blocks a DDT then hits a draping knee smash to the face of Ali. Gulak works the neck as Tozawa gets the fans to chant. Gulak now stomps away before working a stranglehold as he tells Tozawa to stop chanting. Ali escapes and his an overhand chop then comes back with a dropkick. Ali gets a nearfall with a rolling neckbreaker but Gulak shoves him into the corner then sets up for a running move but is distracted by the chanting. He ends up getting kicked in the face then Ali heads up top and hits the inverted 450 splash for the win (6:42) **1/4. After the match, Tozawa heads into the ring and starts chanting over Gulak as his theme plays.

Thoughts: The action was alright but far from the best match these two have had together.  They are continuing with the Tozawa/Gulak feud and it would be nice to see Gulak actually get a win since his character is clicking but that has not been the case. The chanting was a bit overkill here I thought.

Next week, we will see Rich Swann vs. TJP

Dasha Fuentes is backstage with The Brian Kendrick. He tells Cedric Alexander that he feels sorry for him as Gallagher is coming up with ways to torture him then feels bad for joining the mob mentality that attacked Enzo last week and is now standing by their champion. Kendrick then tells Cedric that his generation is soft but Cedric blindsides him and stomps away while screaming. Kendrick is then shown on the ground grabbing his shin. I liked the aggressive Cedric showed here and its nice to actually see a WWE babyface not look like an idiot and get some revenge.

Cedric fires away to start. He stomps a mudhole in the corner then tosses Gallagher across the ring. He hits a dropkick but Gallagher is able to toss him outside. Cedric gets booted in the face when he returns as Gallagher now applies a chinlock. Gallagher stomps away in the corner then goes to work on the legs. He catches Cedric with a dropkick for a two count then hits some kicks to the chest but Cedric fires up and elbows Gallagher outside then torpedoes him with a suicide dive and starts hammering away. Gallagher rolls back outside but Cedric goes nuts and kicks his legs out before whipping him into the barricade. Gallagher comes back with an elbow smash and crawls underneath the ring then comes out to surprise Gallagher from behind. Gallagher grabs his umbrella but Cedric steps on it when he returns in the ring and points it at Gallagher before hitting him for the DQ (6:25) **3/4. After the match, Cedric continues to destroy Gallagher until a few officials run out to stop him. Gallagher is rolled inside as a “let them fight” chant breaks out so Cedric springboards in with an attack. Kendrick limps out now and stares down Cedric, who yells at him to come into the ring.

Thoughts: Easily the best thing on the show tonight. I like Cedric acting aggressive and how he let Gallagher & Kendrick know he is not going to take any crap from them without a fight. I presume this leads to a future match between Gallagher and Cedric, likely with some sort of stipulation attached. It seems Cedric is going to get a babyface push and with Enzo constantly taking jabs at him on the mic I bet they eventually meet for the title down the road.

Final Thoughts: Not much to see here. They failed in getting anyone to care about Kalisto as a challenger tonight with the way he was presented and the action was underwhelming. Next week should have good match in TJP and Swann as those two have great chemistry together in the ring but having Enzo run down the entire division week after week isn’t going to keep people tuned into the show.