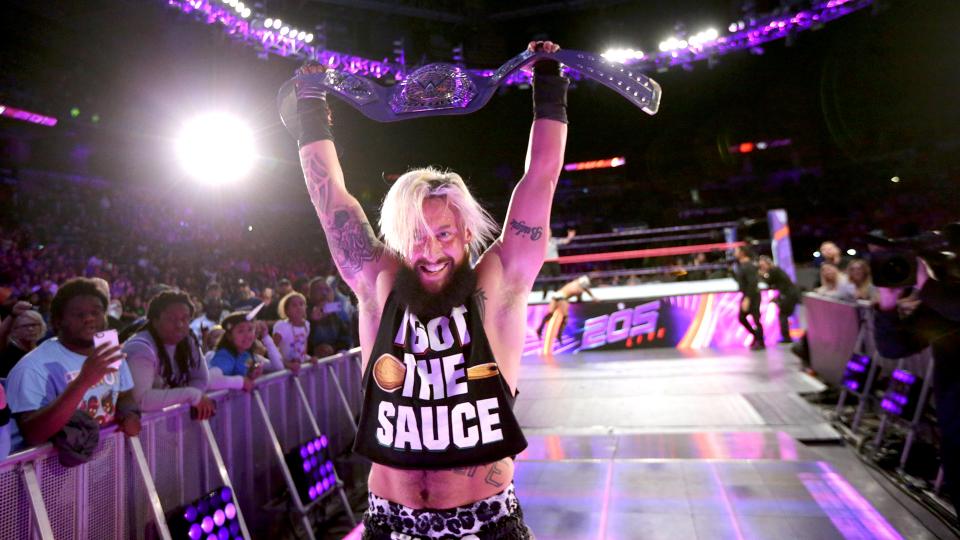 From the BMO Harris Bradley Center in Milwaukee, WI

A video package on the Kalisto vs. Enzo Amore Cruiserweight Title match at TLC is shown where Enzo won back the title.

Nese and Cedric start off then Nese stops everything to flex his bicep. Cedric takes him down then uses a satellite headcissors and a dropkick. Swann tags in and gets a nearfall as the announcers mention that Swann is happy to team with a friend in Cedric. Nese drives Swann into the corner then Dar tags in and slows things down with some arm work. Swann fights back and hits a dropkick but Nese made a blind tag and knocks Swann down on the outside. He rams Swann into the barricade then flexes before taking the action back into the ring. Swann punches back but Nese prevents a tag. Nese takes Swann down with a leg sweep then tags out as Dar hits an uppercut. Dar sends Swann into the ropes with a snapmare and Nese tags back into the match and puts Swann in the tree-of-woe then hits his ab crunch kicks. Dar tags in and attempts the ab crunch kicks but Nese is upset with his awful technique. Swann manages to surprise Dar with a small package for a two count but Dar regains control. Swann fights out of the corner but Nese cuts him off with a forearm smash. Swann comes back with a roundhouse kick and falls on top of Nese but Dar pulls him outside to break up the pin. Dar is once again the legal man but runs into a super kick then Swann crawls over and makes the tag. Cedric runs wild on Dar and almost puts him away with the handspring enziguiri. He then low-bridges Nese as we see Jack Gallagher & Brian Kendrick on the ramp. Dar works a hanging guillotine then Nese pulls Swann off of the apron. Swann takes Nese down with a headscissors then runs in to hit Dar with a super kick. Swann then flies out with a corkscrew senton to take out Nese as Cedric puts Dar away with the Lumbar Check (9:00) **3/4.

Thoughts: Solid match. The team of Nese & Dar did not show much promise though as it seemed they tried to have Dar do some comedy in wanting to have a body like Nese but coming up short.

After the match, Gallagher tells everyone to settle down because they are not here for a fight but rather to extend an olive branch of peace. Kendrick is happy that Cedric showed everyone he has what it takes. However, he will never live up to his potential if he carries about the dead weight “dancing clown” that is Rich Swann. Gallagher said he was once in that position but learned the fans do not matter and Swann does not matter either because they do not have cruelty, which will take you higher than expected. Gallagher tells us that next week they are coming for Swann as Kendrick wants Cedric to think about this and make the right decision and if he does not have one then they’ll make it for him. This storyline is continuing but they have added a new wrinkle with Gallagher & Kendrick trying to convince Cedric to ditch Swann and join them because he shows the ability to act cruel and is not a dancing goof.

Drew Gulak heads out to the ring for his match. He tells us about he is appalled that his Power Point presentation was conveniently removed from the TLC Kickoff Show by the “powers to be.” Gulak then said he lived true to his “Drewtopia” by damaging Akira Tozawa’s vocal cords for violating the “No Chants” policy. Gulak then said he will be staging a protest and there will be no more matches tonight and the crowd better buckle up because they are now going to have a refresher course on all 277 of his Power Point slides. We start back to slide #1 which is “No Jumping Off Of The Top Rope” as Gulak points out that this is constantly violated by the 205 Live locker room but then Gran Metalik comes out. Once again, Gulak is just great in this role and able to get heel heat too.

Gulak yells at Metalik to stay on the ground and they start off on the mat with Metalik working a headscissors. Metalik stays in control and works the arm but Gulak switches to a side headlock. Metalik takes Gulak down with a hurricarana then kicks him from the apron before connecting with a springboard dropkick. Metalik heads back up top and walks the ropes before flying outside with a quebrada. Gulak is rolled back inside then Metalik heads back up top but Gulak cuts him off. Gulak is pissed and stomps Metalik while yelling out “no top rope.” Gulak now stretches out Metalik then covers for a two count. Metalik breaks up a hammerlock with a snapmare then starts to fight back. He hits a missile dropkick then head up top again and walks the ropes before hitting a splash as that gets two. Gulak blocks a suplex attempt and they fight over that in an awkward  spot. Metalik gets two with a cradle then places Gulak up top and takes him off with a hurricarana as that gets two. Gulak tries to slingshot back inside but Metalik catches him on his shoulders and tries for a Death Valley Driver but Gulak counters that into a Dragon Sleeper then locks on a body scissors for the win (6:54) **1/2. After the match, Gulak drags Metalik and drapes his leg over the bottom rope an tries to destroy his leg so he will not go off of the top rope again but Tozawa runs out for the save and knocks Gulak outside then starts chanting, to further piss off Gulak. Tozawa then checks on Metalik.

Thoughts: It seemed like they had some miscommunication at times but the story was Gulak trying to punish Metalik for using the top rope and ultimately he was successful. And, Tozawa is now back and able to speak as his feud with Gulak will continue.

Dasha Fuentes is backstage with Kalisto. She asks him about his mindset heading into tonight’s rematch. He says he beat Enzo once and can do it again and promises to reclaim the Cruiserweight Championship.

Enzo Amore is with Ariya Daivari on his way to the ring. He hands the mic to Daivari, who says his bank account has never been happier since aligning with Enzo as “bucks and a championship” is something Milwaukee knows nothing about as that gets them some heat. Daivari then puts down Kalisto before doing the SAWFT routine since Enzo’s voice is still gone.

Kalisto takes Enzo outside with a shotgun dropkick then heads out and hammers away. Enzo heads back in and grabs on to the ropes but Kalisto pulls him inside and stomps on his hand as Enzo was holding onto the ring apron. Kalisto hammers away in the corner but Enzo backdrops him to the floor. Enzo demands the ref start counting ASAP but Kalisto is able to beat the count, only to get shoved out again. Kalisto clutches his leg then manages to kick Enzo from the apron. Kalisto eats boot on a charge then Enzo hammers away then sets up for a superplex to the floor but Kalisto fights back and knocks Enzo to the apron. Enzo yanks Kalisto off and they fight on the apron as Kalisto hits Enzo with a Death Valley Driver as both men are out on the floor. Enzo crawls up the ramp now but Kalisto crawls after him. He shoves him into the apron then back inside to beat the ten count. Enzo lures Kalisto into the corner and heads up top but Kalisto cuts him off with an enziguiri then hits a tornado DDT. Kalisto goes up top but Enzo kicks the ref into the ropes as that cuts off Kalisto then the ref rings the bell for the DQ (6:12) *1/2. After the match, Enzo heads up the ramp but Kalisto runs after him and attacks. A few refs back off Kalisto then Enzo takes the mic and says he is still the Cruiserweight Champion.

Thoughts: The finish was lame but it looks like these two will have another match coming up at some point in the future. Kalisto worked hard to make this somewhat decent and it was better than their match at TLC anyway.

Final Thoughts: This show was focused at least and they have a few different storylines going on at the moment. The action was below average but nothing was outright terrible or anything and the segments all had a purpose. With the Cruiserweights role unclear heading into Survivor Series I expect more continuation of the feuds we saw tonight going forward.