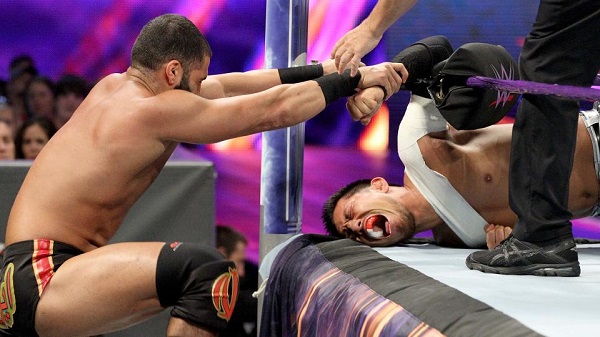 From the Legacy Arena in Birmingham, AL

Your hosts are Vic Joseph and Corey Graves. We get a lengthy video package on the Drew Gulak/Mustafa Ali feud to hype up tonight’s 2 out of 3 falls matches. It was well-produced.

2 out of 3 Falls Match: Mustafa Ali vs. Drew Gulak

They both trade holds to start. Ali taunts Gulak with his athleticism then uses a few different pinning combinations and ends up winning the first fall (1:53). Gulak heads outside to flip out and toss then re-enters and cheap shots Gulak after a break. Gulak drops an elbow for two but runs into a dropkick. Ali rolls out Gulak for another nearfall but Gulak ends up catching Ali and dumping him outside. Gulak headbutts Ali down then works a chinlock. Gulak becomes more aggressive then tells Ali he will never find success. Ali fires up and catches a kick then runs wild. Ali hits his rolling neckbreaker then he takes Gulak down on the outside with a baseball slide. Ali gets tossed over the timekeeper’s area but comes back with a hurricarana as both men are down. They head back inside where Gulak yanks Ali off of the top rope then takes him into the corner with a cravate before making Ali tap with a Dragon sleeper as we are tied one fall apiece (7:17). Gulak immediately attacks Ali after the ref signals the start of the third fall. Gulak gets two with an elbow drop and goes back to a chinlock. The crowd rallies behind Ali but Gulak cuts off a comeback by blocking a ropewalk with a powerbomb for a nearfall. Ali then spikes Gulak on his head with an inverted hurricarana as both men are down. And that was nasty. Gulak rolls outside but Ali climbs up top and flies out with a picture-perfect somersault plancha. Ali rolls Gulak inside and heads up top but Gulak rolls through a crossbody and almost gets the win. Gulak blocks a tornado DDT attempt then suplexes Ali into the corner for two. Ali fights off Gulak in the corner then hits a floating DDT for two. They work a reversal sequence that ends with Gulak hitting a lariat for a two count. Gulak cannot believe Ali kicked out then he looks at the top rope and very slowly climbs up but decides to get down. However, he took too long as Ali takes him off with a hurricarana then gets the win with the inverted 450 splash (15:16) ****.

Thoughts: Excellent match. The third fall was just awesome too and was some of the best wrestling I’ve seen in the WWE during the past few months. Both guys worked hard and the story of the match revolved around their feud, which has been one of the more underrated this year. I feel for Gulak as I do not know what else he can do with this character right now and he was doing nothing prior to this feud. And Ali is someone who has shown the ability to shine whenever given the opportunity in the ring. He’s a candidate to once again get lost in the 205 Live shuffle. I highly recommend this match.

We get clips from RAW last night with Akira Tozawa yelling at Titus for stopping his match against Ariya Daivari then asking for a rematch tonight.  We get a clip from earlier today afterwards with Apollo Crews telling Tozawa the business is a marathon and not a sprint before saying Titus cares about them. Tozawa says he is ready as Crews is worried about his friend’s health.

Before the match, Kendrick asks Bennett if he knows Jack Gallagher due to the fact they are from the same town. Kendrick asks if he’s proud of Gallagher and when Bennett says yes, Kendrick says there are two type of people in the WWE, fighters like himself and clowns like Gallagher. Kendrick then tells Bennett to do the smart thing and quit unless he thinks he can beat him. Bennett says he can beat him and we get the match.

The Brian Kendrick vs. Devin Bennett

Kendrick cheap shots Bennett then beats him down. He follows with a suplex and continues to rough Bennett up. He yells at Bennett if he’s a fighter and gets hit in the face but Kendrick boots Bennett down then locks on the Captain’s Hook for the win (1:51).

Thoughts: This Kendrick/Gallagher feud is not connecting. The story is Kendrick hates Gallagher because he acts like a clown but the crowd does not seem to care much, especially since Gallagher’s character has cooled off a lot since he was in the Cruiserweight Championship picture.

Highlights from last week’s “I Quit” match between Cedric Alexander and Noam Dar are shown, including the end with Dar dumping Fox and making her cry by saying he used her for his own gain. At least the feud is over. I think.

Dasha Fuentes is backstage with TJP. She asks him about his motives in challenging Rich Swann to prove he is the better man by beating a guy in seconds that just lost to Swann. TJP says the only person upset is Swann, who he says cannot stand coming in second place. TJP brings up how he beat Swann in the CWC last year and says next week he will challenge Swann to a tag team match where they both pick a partner. Looks like they are building towards TJP snapping on Swann.

Before the match, Daivari puts over Iranian wrestling and how it has honor, unlike Tozawa, and promises to become the next great Iranian champion. Tozawa comes out with his shoulder all taped up but leads the crowd into a chant. Tozawa dodges an attack then chops down Daivari. He follows with a dropkick then a senton for a two count. Daivari tries a cheap shot in the corner but Tozawa nails him with a forearm smash. Daivari rolls outside and yanks Tozawa’s shoulder down and goes to work. Daivari yells at the crowd after sending Tozawa’s shoulder into the turnbuckle. Tozawa tries a sunset flip but Tozawa blocks that then stomps the injured shoulder. They head outside where Tozawa catches Daivari with a kick to the face. Tozawa hits another kick then they head inside where he hits a hurricarana. Daivari heads outside again as Tozawa flies out with a tope. Tozawa is grabbing his shoulder in pain on the floor. Daivari is rolled inside and is able to yank Tozawa down by the shoulder after a reversal sequence. Tozawa gets two with a small package then kicks Daivari down and hits a Shining Wizard for a two count. Daivari once again attacks the arm then heads up top with a frog splash but Tozawa is able to kick out then cradles Daivari for the win (8:21) ***. After the match, Daivari attacks Tozawa’s shoulder and gloats on the stage while Tozawa is on the floor getting checked out by the referee.

Thoughts: Good match, with the #1 contender Tozawa overcoming the odds on his own. Daivari was fine here but does not stand out whatsoever yet appears to be getting a push on this show.

Final Thoughts: The Gulak vs. Ali match was excellent and the main event was good too as the show featured better in-ring action than usual. The Kendrick vs. Gallagher feud is lacking and Neville did not make an appearance but everything else storyline wise was solid.