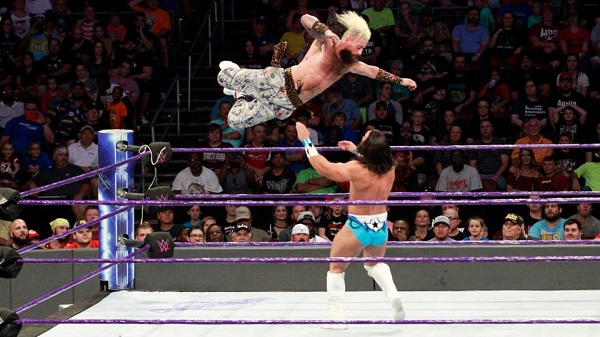 From the Verizon Arena in North Little Rock, AR

We are shown a video package on the Jack Gallagher and The Brian Kendrick feud to hype up tonight’s No Disqualification match.

No Disqualification Match: The Brian Kendrick vs. “Gentleman” Jack Gallagher

Gallagher stares down Kendrick, who keeps yelling at him. Gallagher doesnt budge at first then starts beating the crap out of Kendrick. Gallagher blocks an umbrella shot and comes back with a headbutt before whacking Kendrick with an umbrella. Kendrick rolls outside where Gallagher sends him over the barricade with a running dropkick. Gallagher beats on Kendrick in the crowd and then up on the stage. Gallagher kicks Kendrick down the ramp and continues to beat him down. Gallagher lands mounted punches on the announcers table then takes the table apart but that allows Kendrick time to grab a kendo stick and whack Gallagher. Kendrick repeatedly rams Gallagher into the post and stairs then ties Gallagher’s foot in the ring apron ties then whacks him with a kendo stick as the match stops as Gallagher’s face is covered in blood. Kendrick taunts the crowd then paces the apron as Gallagher is being cared for on the floor. Kendrick rolls Gallagher inside after he was cleared and grabs the ring bell where he uses a DDT then uses a kendo stick for the Captain’s Hook and gets the win (7:34) **1/2.

Thoughts: These guys hit really hard and the match was vicious but after all of this having Kendrick win via submission is nonsensical. The whole story was Kendrick saying Gallagher is a clown that does not belong and by winning clean here, he basically proved that as there is no reason for Gallagher to get a rematch. The putrid booking of WWE babyface wrestlers continues but they really should just turn Gallagher heel at this point as they are weak on that side of the roster in the Cruiserweight Division.

Dasha Fuentes welcomes Nese, Gulak, and Dar backstage. Dar said he underestimated Enzo last night on RAW and that he beat himself instead of Enzo winning. Gulak says its an outrage that Enzo came to tarnish 205 Live and how he cannot cut it in the Cruiserweight Division. Nese says look at Enzo then look at himself as Enzo is not on his level. Gulak finishes by saying Enzo’s debut match on 205 Live will be its last. The story is that Enzo is an embarrassment of a wrestler and does not belong and cannot keep up with the fast-paced Cruiserweights.

TJP has joined on commentary, still on crutches. Daivari is shown in an insert promo saying Swann”s excuses for his loss is not tolerated in Iran. Daivari works the arm to start as TJP talks about his rivalry with Swann. Daivari gets caught with a dropkick but is able to yank Swann’s hair and hit an inverted DDT for a two count. Daivari now targets the back but Swann begins to run wild. Swann follows Daivari outside and gets dropped on the announcers table as Daivari grabs TJP’s crtuch and yanks it away. Daivari stares down TJP then heads inside where Swann rolls him up with a small package for the win (4:07) *1/2. After the match, Daivari attacks Swann then beats on TJP. He rolls TJP inside but TJP fights back and hits a springboard move and kips up as Swann is in shock. Swann then laughs and heads outside for the other crutch and gives it to TJP before leaving. TJP is pissed and slams down the crutch before hitting Daivari with a Detonation Kick as Swann shakes his head and goes backstage.

Thoughts: The fact TJP’s injury was bogus is not surprising but the whole reveal of it was a bit convoluted if you ask me as why would Daivari yank away the crutch? TJP helped him out last week and did nothing to him during the match. As for the Swann/TJP feud, I have no idea where this is going anymore but they have good chemistry in the ring and I will look forward to seeing their rubber match.

Cedric and Metalik are backstage when welcomed by Enzo, holding a marker and a white board. Enzo says he is a player coach but Cedric tells him 205 Live is a whole different avenue. Enzo then talks and talks before drawing up a plan as Cedric shakes his head. Even his own teammates are weary of Enzo.

Enzo makes fun of Dar for looking like “Captain Underpants” and they will win quick enough so Nese can make his shift at Chippendales. Corey compares Enzo to a guy that plays a lot of Madden and thinks he can make the Steelers. Gulak baacks Enzo into the corner and works the arm. Enzo is grounded again by Gulak then backed into the corner. Enzo fights back and tags Cedric as Neville is shown watching backstage. Nese is in and stops the match to flex and show Enzo how he is not soft before working a fast-paced sequence with Cedric. Enzo is back in and flexes after a double ax handle before working the arm. Nese comes back with a dropkick then slaps Enzo around and mocks him for thinking he is a cruiserweight. Enzo snaps Nese’s neck then the match breaks down with Cedric and Metalik hitting stereo dives. Enzo signals for a dive but Nese cuts him off as Corey notes Nese probably saved Enzo’s life. Nese mocks Enzo, who makes a blind tag as Cedric runs wild. Dar runs intereference on the apron as Nese chop blocks Cedric then Dar hammers away on the outside. Back in the ring, Gulak puts Cedric in a chinlock and works that for a bit. Cedric has the crowd behind him and fights out then hits a handspring enziguiri as both men are down. Gulak has Cedric’s foot and tries to pull him away but fails as Metalik tags and runs wild on Nese. Gulak pulls Nese away from a dive then Cedric takes Gulak out with a dive. Enzo tags in and hits Nese with a crossbody that gets two. Dar runs in and gets taken out then Enzo rolls up Nese from behind and puts his feet on the ropes for leverage and gets the win (9:53) **1/4. The camera shows Neville backstage laughing as Enzo dances with his partners following suit as they celebrate.

Thoughts: A lot of this match revolved around Enzo and he just isnt any good in the ring. He did get the win for his team, by cheating, so I assume he will be facing Nese at some point and will likely ending up feuding with Neville.

Final Thoughts: One of the weaker 205 Live episodes in a long time. Enzo’s debut was not good and there just is not any interesting feuds going on in this division at the moment. The action was forgettable too. This is a division that can use an exciting talent in the ring, not an entertainer.