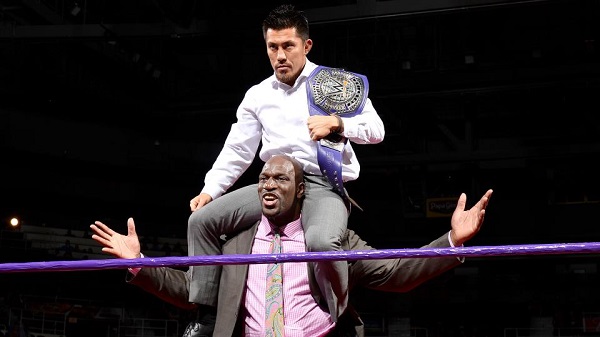 From the Dunkin Donuts Center in Providence, RI

We are shown highlights from RAW last night when Akira Tozawa defeated Neville to become the new Cruiserweight Championship. Tonight, we will get a celebration for Tozawa put together by Titus Worldwide.

Before the match, Gulak tells us Nese called him for advice on who to wrestle (since he beat both his opponents over the past two weeks) and suggested they have a tag match . Nese starts off with Alexander but stops him in order to flex his bicep. After that they work a fast-paced sequence that ends with Nese avoiding a potential dropkick and tagging out. Alexander takes Nese down then tags Metalik, who shows off his speed with some nifty work the crowd appreciates. Gulak is double-teamed briefly then Metalik slaps him across the face. Gulak fights back and hits a shoulder block then Nese comes in and runs into a super kick. Metalik walks the ropes and hits a dropkick then Nese rolls outside as Metalik was back up top but Metalik walks teh ropes for a moonsault. Alexander flies out to take Gulak down. Back inside, Nese catches a springboard move and hits a gutbuster for two then beats on Metalik in the corner. Metalik blocks a superplex by crotching Nese on the top rope then takes him off with a hurricarana as both men are down. They tag out as Alexander runs wild on Gulak. He takes a charging Nese off of the apron then drills Gulak with a back elbow smash. Nese breaks up a pin with a baseball slide and tosses Metalik outside. Nese tries to distract Alexander but that fails as Alexander quickly catches Gulak with the Lumbar Check for the win (7:38) ***1/4.

Thoughts: Fast-paced match to kick off the show. The crowd reacted well to Metalik & Alexander’s offense and the heel team of Gulak & Nese did a great job in this one too. Gulak did not come out with the megaphone and “No Fly Zone” sign but still hates high-flying and unnecessary risks.

Noam Dar, Ariya Daivari, and Lince Dorado are backstage. They are happy Neville has lost the title but he enters looking pissed and they all leave. Neville then tosses a chair and screams.

Titus is shown on his phone in a seemingly great mood to hype up tonight’s celebration.

The Brian Kendrick vs. Mustafa Ali

Kendrick is paranoid about Gallagher attacking him and starts checking underneath the ring to see if he is there. Ali has Kendrick scrambling to the ropes to start. He then hits a dropkick for two but Kendrick drills him with an elbow in the face. Ali comes back with a crossbody from the top as the announcers keep putting over how Kendrick seems “lost.” Kendrick boots Ali in the face but misses a charge and gets kicked. Ali then hits a rolling neckbreaker for two and heads up top. Ali rolls through a sunset flip and gets drilled with a basement dropkick. Ali heads up top but Kendrick cuts him off and locks on the Captain’s Hook. Ali is trying with everything he has to reach the ropes and finally does. Kendrick sends Ali through the ropes with a running kick to the face then whips him into the ring apron. Kendrick now sticks Ali’s foot in a hole from the steel steps then rolls inside to break the count and tries to destroy his knee but Gallagher runs out and pummels Kendrick for the DQ (5:02) **. Kendrick flees through the crowd as a pissed off Gallagher is in the ring asking for him to come back.

Thoughts: The action was fine with the story of Kendrick being too preoccupied/paranoid with Gallagher thus not being fully focused on his opponent. However, this Gallagher/Kendrick feud is not over at all and that’s a shame since Gallagher was one of the most over acts in the division at one point. I’d like to see Ali get to do something too other than being a pawn in this feud.

Dasha Fuentes is backstage with Rich Swann. He is all smiles as Dasha asks him about his rubber match against TJP tonight. Swann says TJP is not the only one who can do a victory dance but Daivari interrupts to say TJP is out and he is Swann’s new opponent. Swann wants to know what happened to TJP but Daivari tells him to be more concerned about his new match for tonight.

Swann dances after avoiding a charge in the corner then works a side headlock. The announcers talk about the Swann/TJP rivalry as Swann hits a dropkick for a two count. Daivari slides out onto the apron but Swann kicks him down. Daivari ducks a moonsault block then Swann charges but Daivari tosses him against the apron. Daivari works over the neck as they head back into the ring. Swann fights back and gets two with a leg drop to the back of the neck. Daivari yanks Swann down by the hair and hits an inverted DDT but misses a frog splash. Swann hits a super kick then climbs up top but TJP comes out on crutches and that lets Daivari yank Swann down then hit the hammerlock lariat for the win (5:03) *1/2. After the match, TJP stares down Swann from the aisle.

Thoughts: Dull action with a lame finish. It was obvious that TJP was going to screw over Swann somehow and the fact he is on crutches and looking disappointed makes me think the story will be TJP is going to make Swann guilty for hurting him in their match last week and avoiding their rubber match.

A paranoid Kendrick tries to leave the arena but runs into Dasha. He rambles on with some paranoid tangent before coming to the conclusion that he should challenge Gallagher to a duel. A bizarre segment to say the least.

Its now time for Tozawa’s celebration. Titus is out first as the ring is all set up for a champagne toast. We get the spotlights going as Tozawa is introduced. He comes out as Titus waves “bye bye” to Neville’s title reign then Tozawa speaks. He talks about this being an important moment as Titus pops the champagne bottle that spills and tells him to be easy. Titus then has something important to say to Tozawa and that is “thank you” as Tozawa’s dream to be a WWE Superstar was thought to be a silly dream to many, just like Titus Worldwide, but now they are both a reality before Titus kicks off the celebration. However, Neville comes out to interrupt. Neville said he brought honor, dignity, and respect to the Cruiserweight Championship and will rectify the mockery that Tozawa has made of the belt at SummerSlam. Neville looks at the SummerSlam countout clock on the screen and tells Tozawa this is amount of time he has left with his championship. Titus tells Neville he needs some sleep and that his mind games will not work as Tozawa is the new champ and makes the demands. Neville charges into the ring but Tozawa boots him off of the apron. Tozawa heads out and tosses Neville around then holds up the belt in the ring to close the show as Neville is out on the floor. I liked seeing Tozawa stand tall but I cannot help but think he will get screwed out of the title at SummerSlam.

Final Thoughts: The opening tag match was really good and the celebration was a nice moment. However, the rest of the action was disappointing and this Kendrick/Gallagher stuff is failing to connect and will apparently still continue for reasons I cannot understand. It will be interesting to see what happens with the title coming out of SummerSlam though as there are not enough strong heel opponents for Tozawa to face if he remains the champion.