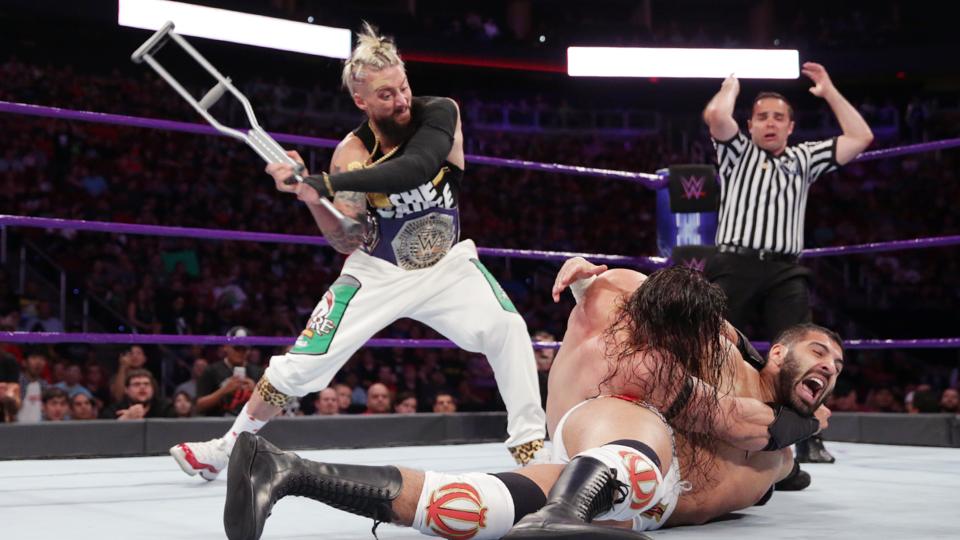 From the Gila River Arena in Glendale, AZ

Your hosts are Vic Joseph and Byron Saxton

We get a video package from last night where Enzo Amore pissed off the entire Cruiserweight Division and ended up getting destroyed by Neville after bragging about how much better he is than the rest of the division.

Enzo comes out to start off the live show, hobbling on one crutch. There are a few kids shown in the crowd wearing Enzo wigs. Enzo says he keeps it real and how last night he was really hurt but is hiding it as well as Cedric Alexander hides his charisma. Enzo then talks about never calling out sick and is the same backstage as he is on stage and is a champion. Enzo takes credit for 205 Live being relevant and says everyday Neville has to wake up and look in the mirror and how that’s the joke. He now shows us what happened to him when RAW went off air as Braun Strowman came down to destroy him then the rest of the Cruiserweight Division joined in when he left. A “you deserve it” chant happens after it airs as Enzo says they are right in that he deserves the title. She talks about her mom being flown in and how she cried after watching him get beat down. Enzo then says the same haters saying “one more time” think Neville was going to save the Cruiserweight Division then talks about his clause that stated any cruiserweight who laid their hands on him forfeited any future title shots he will retire as champion. He then addresses Neville again and makes fun of his appearance before calling him SAWFT. Enzo then leaves and slaps the hand of a young kid. Enzo amped up the arrogance here but played up to the fans a tiny bit too. They also continued the storyline with the “No Contact” clause from last night since everyone in the Division attacked him they all forfeited any shot at a title. They can get around that by debuting a new competitor to 205 Live but who could be a possible choice for that role?

Drew Gulak comes out to the ring holding his “No Chants” sign as he makes his way to the announcers table.

No Titus here. Gulak rags on Joseph during commentary as Nese stops the match to flex his bicep, which Gulak says is not showboating because he “just looks good.” Nese then takes down Tozawa and stomps away. Tozawa rolls through a sunset flip and hits a kick. He heads up top as Gulak says its a waste of time to go to the top rope and Nese cuts him off. Nese then boots Tozawa and catches him with a gutbuster for a two count. Gulak says he discourages chants because it turns the WWE Universe into “mindless sheep” and that does not make for a better 205 Live. Nese hits his ab crunch kicks in the corner as he stays in control. He locks Tozawa in a bodyscissors then tosses him into the ropes with a delayed vertical suplex. Nese uses a Torture Rack but Tozawa starts getting the crowd behind him and escapes. He then hits a few chops and takes Nese down with a hurricarana. Saito suplex gets two. Nese rolls outside then Tozawa flies out with a tope as Gulak yells how that was a high-risk move and he should stay in the ring. Gulak becomes disgusted when the crowd chants with Tozawa then both men trade kicks in a fast-paced sequence. Tozawa then takes Nese down with an enziguiri before finishing him off with a top rope senton (7:59) **1/2.

Thoughts: I thought this match picked up at the end but was a bit of a let down. Anyway, the highlight here was Gulak on commentary. He was hilarious and his facial expressions when angry were incredible. Also, zero mention of Titus O’Neill as its unclear whether or not Tozawa is part of “Titus Worldwide.”

After the match, Tozawa taunts Gulak so Gulak puts on the alarm on his megaphone to drown out the chants. Gulak then heads inside to tell Tozawa he is in direct violation of proposal #3 to make a better 205 Live. Gulak then says this in Japanese and then tells us Tozawa violated proposal #7 as he continues on with his Power Point presentation aa we find out #7 of his 274 slides is “no celebrating.” Gulak tells us he has a dream of a “Drewtopia” where talents stay on the ground and shake hands before and after every match without any mindless celebrations to worry about. The crowd starts chanting to piss off Gulak, who calls them all mindless sheep and they might as well be chanting “bah” as he proceeds to make sheep-like noises until Tozawa knocks him out of the ring with an enziguiri. This segment got some heat as Gulak has become phenomenal in this role. He was manipulating the crowd to cheer like Tozawa and got them to boo him too. Who would have thought that in 2017, Drew Gulak would be one of the more entertaining wrestlers in the WWE.

Enzo is walking backstage. Ariya Daivari says he is sorry and a victim of “mob mentality” before sucking up to Enzo, who calls him out on that. Daivari then said Neville orchestrated the entire attack last night and has always been trying to get him. Daivari tells Enzo can be a star outside of the WWE and offers to watch his back so Enzo said he can earn his stripes and will be in his corner tonight. They having Daivari suck up to Enzo, who knows he needs some protection and entertains the offer.

TJP comes out holding the hair he ripped out of Swann’s head from last week as he is facing the other man he laid out last night, Lince Dorado. We then see him in an insert promo saying he ended their friendship because Swann would not give him a rematch. However, Swann comes running into the ring and beats the crap out of TV, who rolls outside and runs away through the crowd. I thought the beat down looked great and Swann showed a ton of fire but unfortunately, the crowd did not care whatsoever. Its a shame as Swann has really become a better wrestler since joining the WWE and possesses natural charisma but the company has no clue how to get him over. It takes more than dancing to get people to cheer.

Jack Gallagher & The Brian Kendrick are shown in front of a chain-link fence. Gallagher tells us they have aligned because season’s change and next week is the beginning of a cruel season for Cedric Alexander. This was a bit corny but I like the thought of Gallagher as a heel so I hope it works out well for him.

Before his match, Neville addresses his actions from last night and the rumors that he is ascending into madness. However, he knew exactly what he was doing and last night was the best of his life. He realizes his rematch has been sacrificed but he does not care and will attack Enzo again and tells him to keep one eye open as he refuses to allow 205 Live to degenerate due to the presence of a “talented, little rat.”

Neville immediately runs out and heads towards Enzo but Daivari attacks from behind. Daivari runs Neville into the barricade a few times then heads inside. Daivari hits three backbreakers then taunts the crowd before tossing Neville into the corner. Enzo dances to mock Neville then Daivari puts Neville into the tree of woe and stomps away. Daivari stays in control but is unable to put Neville away. Daivari whiffs on a frog splash then Neville starts firing away. He stomps a mudhole in the corner then stares at Enzo and slides outside but Daivari takes him out with a baseball slide. They head inside where Neville ducks a clothesline and puts Daivari in the Rings of Saturn for the win (5:13) **. After the match, Enzo heads in and beats on Neville with his crutch then starts hammering away until two referees are able to pull him away. Enzo then trash-talks with the fans.

Thoughts: Well, the Neville/Enzo is definitely continuing. Its not the most effective double-turn I’ve ever seen but its the closest thing to a blood feud we have seen on 205 Live in a long-time. The match was just a backdrop for Enzo’s attack and Daivari is a bland performer.

Final Thoughts: The in-ring stuff was forgettable but they have something intriguing at the moment in Enzo/Neville and Gulak continues to shine in his role, making this a solid edition of “205 Live.”