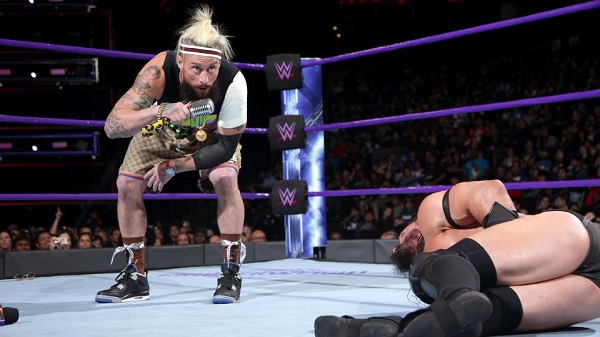 From the Oracle Arena in Oakland, CA

Video hyping up the Enzo Amore vs. Neville Cruiserweight Championship match at No Mercy airs. These two will also have a face-to-face tonight.

Cedric Alexander vs. The Brian Kendrick

We are shown the replay from last week where Jack Gallagher surprised everyone by turning on Alexander and aligning with Kendrick. Alexander runs wild on Kendrick to start. He flies out with a tope but Kendrick then they go back-and-forth outside. Kendrick catches Alexander with a kick to the face for a two count then whips him into the corner a few times. Butterfly suplex gets two then Kendrick applies a chinlock. Kendrick then hits Alexander with crossfaces after sending him into the corner with an arm drag. Alexander fights back and gets a nearfall with a springboard clothesline but Kendrick sidesteps a handspring and runs into a leg lariat. Kendrick tries for Sliced Bread #2 but that gets blocked and it leads to Alexander reversing a rollup for the win (5:22) **. After the match, Kendrick runs halfway up the ramp and gets in Alexander’s face then Gallagher runs out to ambush Alexander. Gallagher lays Alexander out with a headbutt before leaving with Kendrick.

Thoughts: The match was decent but forgettable. They are now having Alexander feud with Kendrick & Gallagher and I wonder if someone else will be paired with Alexander here, like Mustafa Ali

Drew Gulak is shown backstage heading out to the ring while holding a “No Chants” sign.

Dasha Fuentes catches up with Gallagher & Kendrick backstage. She asks Gallagher why he decided to align with Kendrick. He said the fans are not the ones who got four stitches in his hand and looked into the mirror and realized you can be nice or a winner and that is a lesson Alexander is going to learn. Gallagher said he can go through life with a scar but not as a joke. At least Gallagher explained why he has now aligned with Kendrick and it did make sense since he lost the match they had together. Gallagher needed a heel turn and the division is short on heels.

Gulak heads out to the announcers table. He stands up top and addresses the crowd. Gulak talks about what happened last week and how awful it was in “Fashion Jail.” Gulak compares his plight to Galileo and how he would be disgusted at Akira Tozawa thinking the Cruiserweight Division revolves around his chanting. He then leads us to the rest of his Powerpoint presentation. We get plan #6, which is no cell phones. He wants all Millenials to put down their phones and actually learn something but he gets interrupted by Tozawa, who is coming out for his match. Gulak fought off the “what” treatment well in this segment. The fans did Tozawa’s chant at times too.

Gulak is on commentary. Dar lands a few kicks in the corner but Tozawa fights back. Gulak puts down Tozawa and Titus Worldwide then Dar trips up Tozawa but ends up falling down and landing on Tozawa at the end. That did not look too good for Tozawa. Dar works over the leg as Gulak says he’s wise beyond his years. Tozawa fights back and flies outside with a tope then rolls him inside for a two count. Dar comes back with a Dragon Screw then gets a nearfall with a European uppercut. Dar goes back to to the leg but Tozawa fights back then heads up top for the senton and gets the win (3:59) *1/2. After the match, Tozawa does his chants from the top rope while an angry Gulak stares him down.

Thoughts: A nothing match but Gulak was really good on commentary, particularly when ragging on Joseph. They appear set on a Gulak vs. Tozawa feud.

Rich Swann is backstage getting ready for his match against Lince Dorado. TJP comes in to congratulate him but says they have great chemistry in the ring, comparing themselves to Ali and Frazier. TJP wants another match but Swann says they should leave things where they are and concentrate on being friends.

Swann comes out to the ring or his match. However, Dorado does not come out. We cut backstage as Dorado is laid out then Swann looks concerned and heads back. Swann makes it to the entrance way but TJP blasts him with a super kick then stands on his face. TJP yells at Swann for thinking he is better than him and says “you can’t handle this” then rips a dread out of Swann’s head. TJP punts Swann in the ribs and drops him across the guardrail before leaving. I did not feel like these two needed to prolong their feud but the WWE creative team felt otherwise. At least they do have fantastic chemistry in the ring so I will not complain about seeing them wrestle again.

Neville comes out to the ring. He talks about Strowman vs. Lesnar and Cena vs. Reigns at No Mercy but better than that will be Enzo Amore facing him for the Cruiserweight Championship. Neville will take pleasure in exposing Enzo for who he is and how Enzo’s grossly unqualified to step into his world. Enzo comes out and does his routine but Neville makes fun of him for getting destroyed by Strowman last week then mocks his dances and catchphrases in comedic fashion. Enzo’s shoulder is all taped up and talks about Neville being jealous. Neville laughs that off and tells Enzo he is better than him in every way. Enzo says Neville that hate is love disguised by jealously and no matter the win and loss record he is twice the superstar Neville will ever be and lists off his merchandise sales and commercial appearances. Enzo addresses the locker room rumors that he is hated but talks about always performing when he comes out and how this eats people up then talks about being himself. Neville then tells Enzo he made a mistake by running his mouth and how being a superstar and hanging with celebrities does not matter and what will he do when brutalized to the point of no return. Neville says his tactics will not win his championship and all he can hope to do at No Mercy is survive. Enzo agrees but says this isn’t Sunday or No Mercy then kicks Neville in the balls before leaving. I thought Neville carried himself well. Who would have thought a couple of years ago that he could entertain on the mic as a heel? Enzo actually got some boos at the end and with the way he has been portrayed that should not shock anyone. Having him actually winning the Cruiserweight Championship would be a disastrous decision and do nothing but make a complete mockery out of a division struggling to get over.

Final Thoughts: They did the final hype for the Cruiserweight Championship match at No Mercy along with a few decent segments but the in-ring portion of the show was weak and that’s the reason why there is a Cruiserweight Division to begin with. The addition of Enzo has not improved this show in any single way.