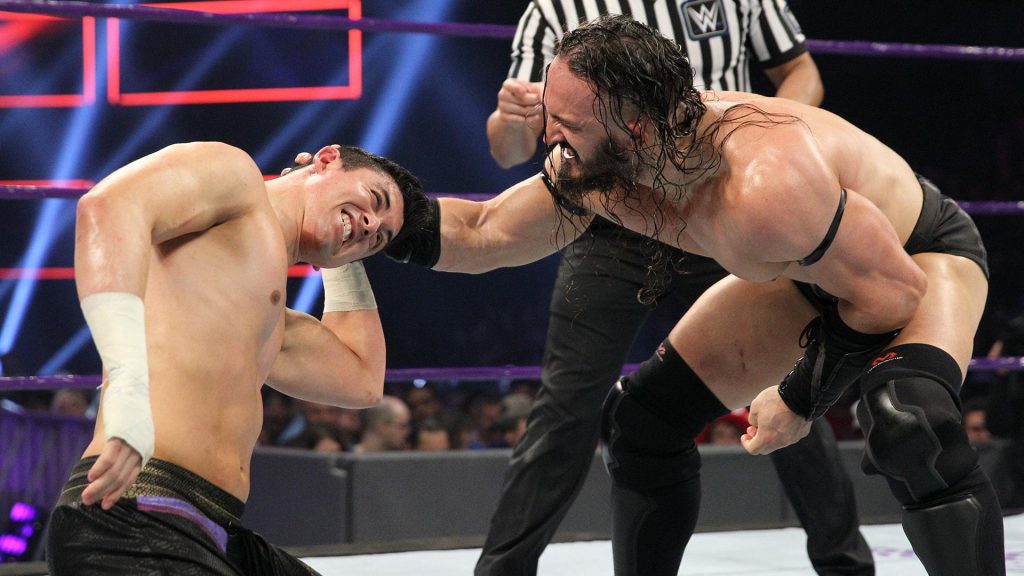 From the Blue Cross Arena in Rochester, NY

We get a video package from last night that lead to tonight’s title match between Neville and TJP.

Before Cedric comes out, Dar tells him he is jealous and that Fox is at home recovering from a neck injury and wants Cedric to move on but gets cut off by Cedric’s entrance. Cedric breaks cleanly in the corner then works the arm until Dar reaches the ropes. Dar does not break cleanly in the corner and works a side headlock. Cedric comes back with a satellite headscissors and a dropkick then heads out and starts beating on Dar. He takes Dar down with a moonsault block from the apron then they head back inside. Dar cuts Cedric off of the top rope and starts targeting the arm. The crowd chants for Cedric as Dar works an armbar. Cedric catches a kick and hits a back elbow smash then a handspring enziguiri. Cedric sets up for a springboard move and gets the crowd behind him as he hits a clothesline for two. Dar kicks out Cedric’s leg then they trade pinfalls but Dar blocks a satellite headscissor attempt and boots Cedric in the chest. Cedric sneaks a small package for a two count but eats boot on a charge then is somehow able to catch Dar with the Lumbar Check for the win (7:09) **1/2. After the match, Cedric tells Dar that he is done with him as well as Fox.

Thoughts: The match was decent. Cedric has really looked impressive since returning from injury. I would be delighted if Cedric moved on from Dar & Fox but who knows if that will happen.

We get a video package on TJP. They show when he won the CWC to become the first Cruiserweight Champion. After that, Dasha Fuentes asks him about his match tonight. TJP sarcastically talks about his sob story then says this brand was created to showcase his talent. He then tells Neville that he now as a TJP problem.

Before the match, we are shown a clip of Ali losing last week to Drew Gulak. The match starts with both guys working the arm. Ali then shows off his athleticism and hits a dropkick. Valle snaps Ali’s neck off of the top rope then knocks him down for a two count. Ali fights back but Valle cuts him off. Ali avoids a charnge in the corner then hits an enziguiri from the apron and follows with a rolling neckbreaker. He then heads up top but Drew Gulak comes out to interrupt as he tells Ali to stay on the ground. Valle then rolls up Ali from behind but Ali reverses and gets the win (3:25). After the match, Gulak is upset his planned failed then he tells Ali he is proud of him for winning by staying on the ground. Gulak calls the crowd a bunch of losers who are unable to find success then asks Ali to join him for his campaign of success but Ali flies out with a seated senton then knocks down the “No Fly Zone” sign.

Thoughts: Ali needed a win and to get back some heat after losing last week and getting squashed by TJP on RAW. The Ali/Gulak stuff got over well enough for a 205 Live crowd anyway and it has been an enjoyable feud. This Valle guy looked solid in the ring too and got in quite a bit of offense.

Now, we get a video package on Rich Swann. He tells us about being the life of the party despite his tough upbringing. He also wants to make his way back to the top of the Cruiserweight Division.

Swann and Akira Tozawa are shown backstage. Titus O’Neill interrupts and wants to talk with “Towaza” alone. Titus says that his friend Apollo Crews has what it takes to bring the Titus Brand to the next level and says his chanting equals money and could stand to have a little extra “yen” in his pocket. Titus tells him to sleep on his decision. Looks like the Titus Brand is trying to add someone from the Cruiserweight Division. I doubt it will be Tozawa but for some reason think it will end up being Cedric Alexander, as his more aggressive style could signal a heel turn.

Dasha is with Neville before he heads to the ring for his title match. Neville says he will dispose of TJP and that he is not on the “Neville Level.”

These two get in each other’s faces before the bell rings. There is a mild chant for TJP here as Neville backs him into the corner then smiles. He does it again then grounds TJP and slaps him around but TJP returns the favor. Neville backs TJP against the ropes then takes him down with a side headlock. Neville then tosses TJP across the ring by his hair but TJP comes back and works the arm while yanking Neville down by the hair. They pick up the pace where TJP trips up Neville and works a single leg crab until Neville reaches the ropes. Neville grounds TJP again then takes him down with a hurricarana after an Irish whip sequence. TJP comes back to catch Neville in a tarantula then takes a breather outside. Neville sneaks out and rams TJP into the barricade then does it again before taunting the crowd and staring down the announcers. Neville rolls inside before dropping TJP onto the announcers table but TJP is able to beat the ten count. Neville hits a powerslam then heads up top and hits a missile dropkick. He heads up top again then gets off to deck TJP but misses a springboard move and gets backdropped outside. TJP takes Neville out with a twisting pescado then both men head inside. They pull hair but TJP comes back with a jawbreaker. He then hits a wrecking ball dropkick and follows with a double chickenwing gutbuster for a nearfall. Neville hooks his feet on the ropes during a Detonation Kick attempt and gets down to drive TJP face-first into the mat. Neville yells “why do you do this to me” as he kicks his face but TJP comes back and targets the knee. TJP then eats a roundhouse kick in the corner as Neville heads up top but misses the Red Arrow. TJP locks on the knee bar as Neville screams in agony but he’s able to escape then after a struggle locks on the Rings of Saturn in the middle of the ring as the referee decides to call it for TJP, who was in agony and had no chance to escape (14:08) ***1/2.

Thoughts: Really good match. Despite TJP still a heel, he got a decent reaction from this crowd. The finishing sequence was excellent and these two worked hard and had great chemistry in the ring.

Final Thoughts: Overall, I thought this was a solid show. The main event was quite good and they are starting to build up guys as Neville needs a new challenger with Austin Aries, who was not mentioned on the show, seemingly out of the title picture. As of now, either Swann, Tozawa, or even Alexander are the most likely to feud with the champion.